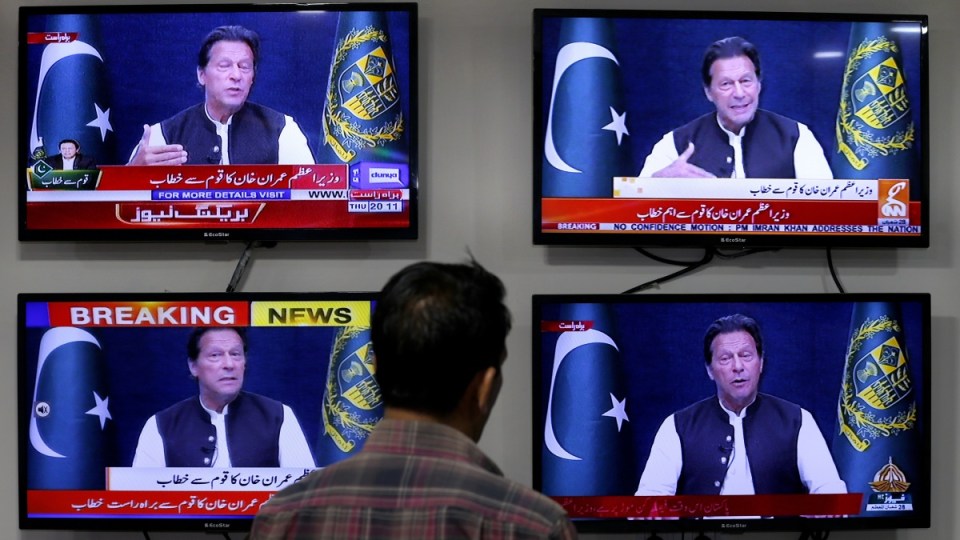 Imran Khan is battling to hold on to his position as Pakistan's Prime Minister.  Photo: AP

Pakistan’s Prime Minister Imran Khan has sought fresh elections after surviving a move to oust him, getting a reprieve in parliament but setting up renewed political and constitutional uncertainty in the nuclear-armed country of 220 million people.

Mr Khan’s fate was not immediately clear after the deputy speaker of parliament, a member of his own political party, blocked a no-confidence motion as unconstitutional.

President Arif Alvi approved the request to dissolve parliament and Mr Khan called on the nation to prepare for fresh elections.

But the opposition vowed to challenge the block on their vote to oust Mr Khan, which many had expected him to lose.

Bilawal Bhutto Zardari, head of the opposition Pakistan People’s Party, promised a sit-in at parliament and told reporters, “We are also moving to the Supreme Court today”.

Opposition leader Shehbaz Sharif, the frontrunner to replace Mr Khan if he were removed, called the parliamentary block “nothing short of high treason”.

“There will be consequences for blatant & brazen violation of the Constitution,” Mr Sharif said on Twitter, saying he hoped the Supreme Court would play a role.

The opposition blames Mr Khan for failing to revive the economy and crack down on corruption.

The prime minister has said, without citing evidence, the move to oust him was orchestrated by the United States, a claim Washington denies.

The opposition and analysts say Mr Khan, an international cricket legend turned politician who rose to power in 2018 with the support of the nation’s powerful military, had fallen out with it, a charge he and the military deny.

No prime minister has finished a full five-year term since Pakistan’s independence from Britain in 1947, and generals on several occasions have ruled the country, which is perennially at odds with fellow nuclear-armed neighbour India.

State Minister for Information Farrukh Habib said fresh elections would be held in 90 days, although that decision rests with the president and the election commission.

Mr Khan’s cabinet was dissolved but he will remain prime minister, said Information Minister Fawad Chaudhry in a tweet.

“What has happened can only be expected in the rule of a dictator,” he told local media.

The country is in the middle of a tough International Monetary Fund bailout program.

In addition to economic crisis, Islamabad faces challenges including an attempt to balance global pressure to prod the Taliban in neighbouring Afghanistan to meet human rights commitments while trying to limit instability there.

Mr Khan lost his majority in parliament after allies quit his coalition government and he suffered a spate of defections within his Pakistan Tehreek-e-Insaf party.

If Sunday’s vote had gone through and the opposition remained united, Mr Khan, who recently lost his parliamentary majority, would have been out of office.

With coalition partners and some of his own lawmakers defecting earlier in the week, Mr Khan had looked set to fall below the 172 votes needed to survive the no-confidence vote.

Instead, Deputy Speaker Qasim Suri announced the no-confidence motion was against the constitution.