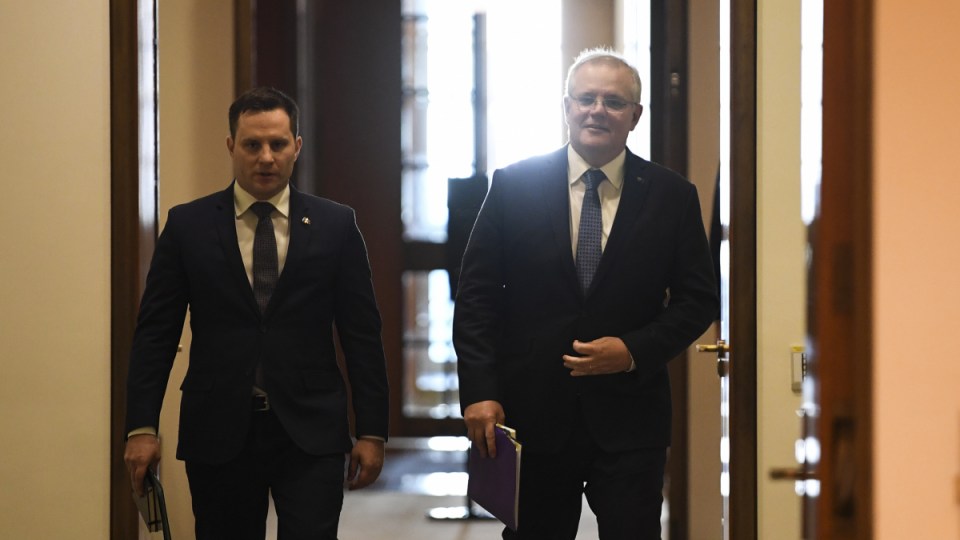 The Morrison government has been accused of trying to wedge Labor on immigration policy by reintroducing a bill that legal experts argue is unnecessary and could result in vulnerable people being deported from Australia.

Federal Parliament has twice rejected the government’s Migration Amendment (Strengthening the Character Test) Bill following strong opposition from Labor and the Greens, but with just three months left before the election, the Coalition has announced a last-ditch bid to get it over the line.

Prime Minister Scott Morrison said the bill, to return on Wednesday following some minor changes, would make it easier to kick criminals out of the country by strengthening provisions in the character test.

He told a party room meeting on Tuesday that the legislation would highlight a “sharp contrast” between the major parties on immigration policy, but Labor is yet to finalise its position as it seeks to negotiate amendments with the government.

“Today, there are foreign citizens who have been convicted of very serious crimes against Australians, who have been jailed and, as a result of the law as it stands today … despite our efforts as a government, we are unable to deport,” Mr Morrison told Parliament on Tuesday.

“Labor and the Greens have been denying us this change for the last 1200 days.”

Under the proposed changes, the government could cancel the visas of non-Australian citizens who have been convicted of serious criminal offences punishable by at least two years’ imprisonment, such as violent and sexual crimes, breaching personal protection orders, or using or possessing a weapon.

Foreign offenders could also have their visas cancelled if they received less than a year’s jail sentence, or if the government considers them to “pose a risk to the Australian community”.

The federal government already has the power to cancel the visa of someone who is considered a risk to the health, safety or “good order” of Australia, including those with substantial criminal records or who are considered at risk of engaging in criminal behaviour.

But Immigration Minister Alex Hawke said it was necessary to explicitly set out in legislation the sentences and offences that would make an individual eligible for deportation.

“Yes, you can use different powers in different situations sometimes, but that doesn’t help us where we have to prevent someone lawfully from coming here in the first place,” he told Sky News.

“The public gets very upset and we do as a government as well (because) serious criminals sometimes overturn our system.”

However, the Law Council of Australia has warned MPs not to support the changes, describing them as “disproportionate and unnecessary”.

The council’s president Tass Liveris told The New Daily the decision to cancel or refuse a visa based on character grounds would “almost always have a profound impact on the lives of individuals and their families” and should be granted cautiously.

He said current laws were sufficient and already gave the government “very broad powers” to cancel and refuse visas.

“The bill’s key amendment is to expand the circumstances in which a person does not pass the character test (and is susceptible to visa cancellation) to designated offences with a statutory maximum sentence of not less than two years, regardless of the actual judicial sentence given,” he said.

“This could permit cancellation or refusal of visas for persons convicted of a designated offence, but who have received only a short sentence, no sentence at all, a fine or a community corrections order.”

Liberty Victoria president Michael Stanton said the bill proposed a “one size fits all” approach that could result in the deportation of people who are inadvertently caught up in the criminal justice system.

“There’s no distinction between a very serious recidivous sexual offender where no one would take issue that their visa should be cancelled and someone who might have engaged in consensual sexting and fallen foul of the law,” he told The New Daily.

“This would effectively ignore all that and lump everyone in the same basket.”

Mr Stanton said he was particularly concerned about the effect the proposed laws could have on victims of domestic and family violence who are coerced to breach protection orders.

“An example of that is where an offender may coerce or at least pressure someone to break a family violence protection order in order to see the kids,” he said.

“If the mother of the children allows that to occur and it doesn’t reach the threshold of duress, then she would be in breach of a family violence protection order and according to this regime, that would result in mandatory visa cancellation.

“That could actually have a chilling effect in relation to reporting of family violence.”

The Victorian barrister said the decision to reintroduce the legislation showed the Coalition wanted to appear tough on crime and migration.

“It appears to be really the government wanting to tap into optics of appearing tough on crime, tough on migrants when really the powers aren’t needed,” he said.

“Both law and order and migration law reforms have been means of attempting to wedge Labor – there’s no question about that politically.”

Shadow treasurer Jim Chalmers told reporters the legislation would best be dealt with in a “constructive, and collaborative, and ideally bipartisan way”, but questioned the necessity given the existing laws.

“We’ve tried to work with the government to understand what they’re trying to do here.

“I think everybody knows what’s going on here – they’re trying to come up with legislation to create some kind of political wedge for political purposes.”