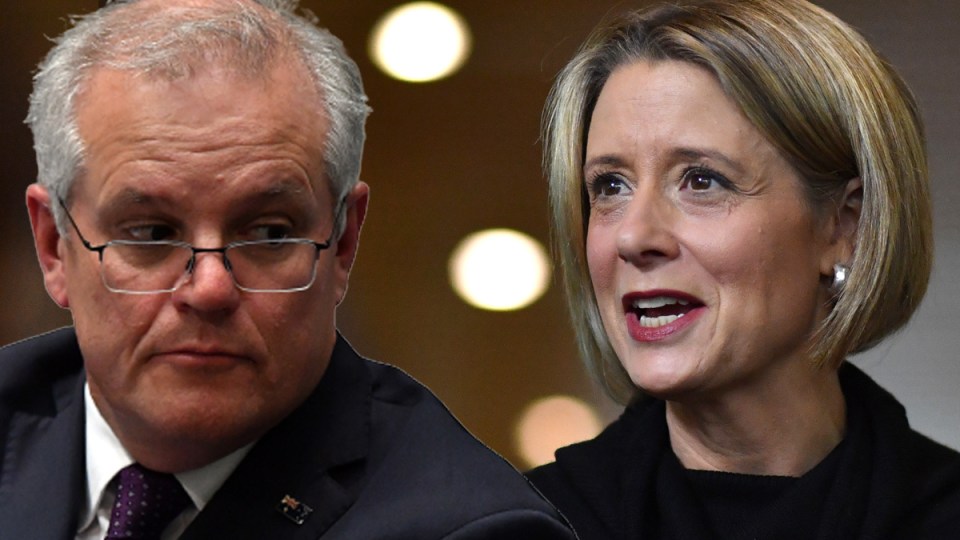 Prime Minister Scott Morrison has launched an extraordinary attack on Labor leader Anthony Albanese and another senior politician as his government pushes ahead with a bill that would make it easier to deport foreign-born criminals.

The Coalition government is planning to reintroduce laws to parliament that it says would close a loophole to migration character test laws.

Under the proposal, visas for non-citizens will be refused or cancelled if they’ve been convicted of a serious crime that’s punishable for more than two years in prison, served less than 12 months in prison or are deemed a risk to the community.

It is the third time the Coalition has attempted to pass the laws, which were first proposed in 2019.

Labor says the bill unnecessary and a distraction – pointing to the deportation of world tennis No.1 Novak Djokovic as proof that the government has “God-like” power to deport who it likes.

On Tuesday, Mr Morrison said Labor had sided with abusers and criminals.

“Anthony Albanese likes to talk about whose side is he on. He is clearly on the side of criminals,” he told Sydney radio 2GB.

“They want to protect people who have committed acts of domestic violence.

“[Home affairs spokeswoman] Kristina Keneally wants people who have been convicted of domestic violence to stay in the country because the judge gave them a soft sentence.”

Senator Keneally told the ABC that Mr Morrison’s comments showed that he either did not understand the current law, or was a “liar”.

“Mr Morrison is either lying about the ability of the Immigration Minister to cancel visas for criminals, or he just doesn’t understand the laws right now,” she said.

Mr Morrison said judges in deportation cases had often handed down lesser sentences to get around existing character test laws to avoid people getting deported.

“Judges are handing down sentences which enables people to get around this, and we need an objective test,” he told Sydney radio station 2GB.

“We want to make sure we can punt them.”

The proposal will be reintroduced on Wednesday, after the previous attempt at the bill was defeated in the Senate late last year.

It came after Attorney-General Michaelia Cash confirmed in Senate estimates on Tuesday that the government would not introduce legislation for its federal anti-corruption commission before this year’s election. It was a key promise from the 2019 poll.

Earlier, Labor and Greens senators had expressed concern the deportation laws could mean visa holders were kicked out of the country for minor offences.

Serious crimes listed in the bill include violent and sexual crimes, breaching apprehended violence orders, using or possessing a weapon or assisting in any of the crimes.

Mr Morrison said 4000 visa holders had been expelled from Australia since the last election.

“We are being frustrated by soft decisions in the courts,” he said.

“We have a law in this country which is if you commit a serious offence, then you go, do no pass go, you’re gone you’re out.”

The government’s renewed push for deportation laws came as it faced more pressure in the second week of parliament for 2022.

Already this year, there have been leaks from cabinet, as well as leaked texts between cabinet ministers and Liberal colleagues. In one, Deputy Prime Minister Barnaby Joyce had described Mr Morrison as a “liar”, a “horrible person” and a “complete psycho”.

There were also reports on Tuesday that another government leak would be exposed on evening news bulletins.

In addition, last week, five Liberals crossed the floor to vote against the government’s religious discrimination bill, arguing it would have put young transgender people at risk of being kicked out of religious schools.

Speaking to government MPs at a joint party room meeting, Mr Morrison said he knew the path to victory at the upcoming poll.

“To win this election will require the most discipline, focus and professionalism from each of us in all our roles. Do that, we win, it’s that simple.”

Mr Joyce told the party room the election was winnable if “we push ourselves through the pain barrier”.

“We want to wake up in the morning after the election having passed over the line, having succeeded,” he said.

“There’s only one part of the race that it’s really important that you’re in front, and that is the finish line.”

However, one Coalition MP spoke disappointingly about the actions of MPs who had crossed the floor on religious discrimination last week.

Meanwhile, Mr Albanese told a Labor caucus meeting the actions of its members last week showed the “party at its best”.

“We made a collective decision and backed it in … we can represent people of faith and still represent that every child should be free from discrimination,” he said.

“If we win, we will act on discrimination on the basis of faith, including an anti-vilification provision, which is stronger than what the government put forward.”

Mr Albanese blasted scare campaigns from the government in recent weeks, and said each had “blown up in their face”.

‘Side of criminals’: PM’s blast for Labor over deportation bill