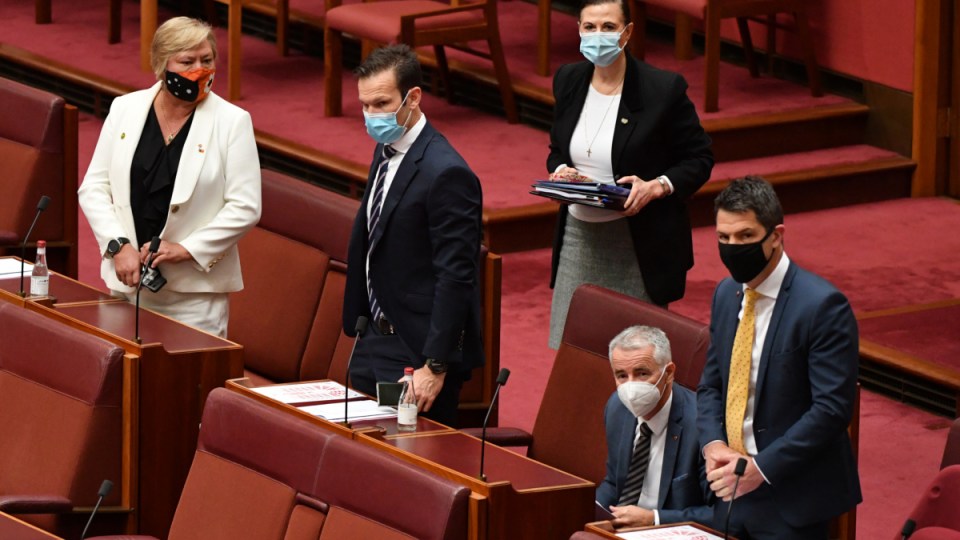 Five Coalition senators crossed the floor to vote against the government and back a One Nation plan to outlaw “discrimination” against unvaccinated Australians on Monday, as Scott Morrison faces Senate chaos with a rump of conservative MPs threatening to vote against their own party.

The Senate decisively rejected Pauline Hanson’s proposal in a final vote, following a passionate speech from Jacqui Lambie, who warned those opting against COVID vaccination that “choices have consequences”.

Senator Hanson’s bill, which sought to extend anti-discrimination protections to people who choose not to be vaccinated, was unusually given precedence in the Senate when it returned on Monday. Normally, that time would have been reserved for government business, but the One Nation leader had threatened to vote against government legislation if her bill wasn’t brought on for debate.

Coalition senator Gerard Rennick, who opposes vaccine mandates, threatened to withhold his vote from the government unless such an anti-discrimination bill was supported. Another government senator, Alex Antic, has also foreshadowed abstaining from votes in a dispute about vaccine mandates.

A bill from Coalition senator Sam McMahon was previously scheduled to be debated early on Monday, instead of Senator Hanson’s. Senator McMahon said she was “disappointed” that the government had given Senator Hanson precedence.

In a speech introducing her bill, Senator Hanson referred to vaccination as “experimentation” and said she would “fight to the death” against vaccine mandates. She also supported using Ivermectin, an anti-parasitic drug that Australian medical experts have warned does not have any proven uses against COVID.

Senator Rennick and fellow Coalition member Matt Canavan spoke in favour of Senator Hanson’s bill. Senator Canavan said he was vaccinated and supported the government’s rollout, but claimed COVID jabs “do not seem to be doing a good job at stopping transmission.”

Very high vaccination figures in Sydney, Melbourne and Canberra have been credited for those cities significantly bending the curves of recent outbreaks.

Labor’s Kristina Keneally said the opposition backed vaccine mandates when they were supported by health advice, and criticised Senator Rennick for his campaign to use a taxpayer-funded website to collect and publish unverified allegations of so-called “vaccine injuries” – as reported by The New Daily on Monday.

Senator Keneally accused the government of having “dog-whistled to extremists” and “pandering to these extremist elements” for allowing One Nation’s bill to be debated.

Senator Lambie strongly opposed One Nation’s bill, saying a choice not to have a COVID vaccine was not “discrimination”.

“You have freedom to make a choice, but those choices have consequences. You cannot call the consequences of every choice ‘discrimination’,” she told parliament.

“You are choosing to do something that puts other people’s lives at risk and you will be held accountable for that choice.”

Senator Lambie she supported people’s right to choose not to get vaccinated, but warned no decision was “consequence-free”.

“If you want to work as a cab driver, you need a driver’s licence. People without licences aren’t being discriminated against,” she said.

“One Nation is not a fighter against discrimination. One Nation seeks to profit from it. It’s just a fundraising exercise for them, that’s all this is.”

When Senator Keneally moved for debate on the bill to end, only five senators in the chamber voted for it to continue – all from the Coalition. Senators Rennick, Canavan, Antic, Concetta Fierravanti-Wells, and Senator McMahon – who complained of her own bill being “booted” to make way for Senator Hanson – were the only voices to back a push for further debate.

The motion was defeated 44-5, with the remaining government members joining Labor and the crossbench to oppose One Nation’s bill.

Senator Hanson and colleague Malcolm Roberts were not physically in the chamber, having decided to stay in Queensland instead of travelling to Parliament, so their votes were not recorded.

At a press conference shortly after the Senate vote, Mr Morrison downplayed the significance of five Coalition senators splitting from the government.

“The Liberal Party and the National Party, we do not run as an autocracy. We don’t take people out of our party if we happen to disagree on an issue they feel strongly about,” he said.

“The government opposed the bill on Saturday and the bill has not been successful. We do not agree with the measures that were in the bill.”

“I respect the fact that individual members will express a view and vote accordingly for those what happened today. We can deal with any differences that occur from time to time.”

However, Mr Morrison faces a final sitting fortnight where at least two of his own senators, plus potentially the two One Nation senators, have threatened to not support government legislation.

It comes in a week where the government is set to debate controversial bills, including a voter ID proposal and its religious discrimination bill – plus, potentially, a federal integrity commission.

Finance Minister and government Senate leader Simon Birmingham said he respected senators’ right to cross the floor, but urged his colleagues not to “to hold one issue ransom to other unrelated issues”.

On Monday morning, Senator Birmingham said it was a “time honoured tradition” for Coalition MPs to be able to cross the floor – but that it should be “used sparingly”.