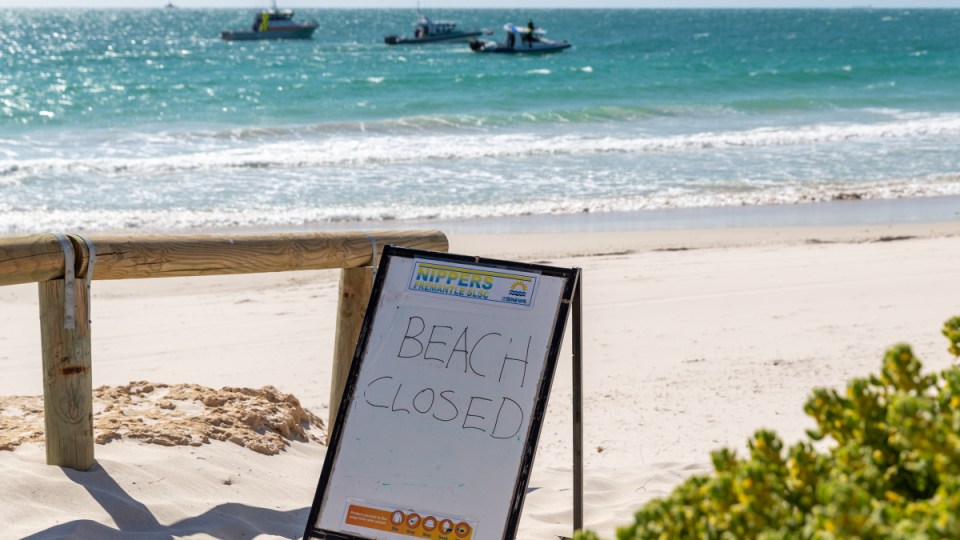 The search will resume on Sunday for a 57-year-old father believed to have been attacked by “at least one” shark — but potentially more — while swimming at a popular WA beach.

The man, who was thought to be a regular at Port Beach in North Fremantle, was reportedly swimming about 50m from shore while his family was on the beach when the attack occurred at about 10am Saturday.

One witness who was on the sand told The West Australian newspaper he didn’t see the initial hit but watched in horror as a swimmer was “dragged under”.

“I saw the man struggling in the water, and then there was a commotion with a tinny coming over surrounding the guy and that was the last they saw if him,” said the man.

“It was big, and it looked like a White,” he said. “After the attack we saw it swing out the water with its fin.

“And then we saw these young guns in a tinny racing up the beach raising the alarm.”

WA Police Acting Inspector Troy Douglas said police were unable to confirm how many sharks were involved after reports of a great white and tiger shark.

But he said it was “obviously at least one”.

It was likely to be the first fatal shark attack in the Perth metropolitan area for five years.

Two teenagers who were on the water in a nearby dingy and called emergency services were commended for their actions.

“I can say that the actions of the witnesses were heroic and very brave for getting everyone else in the water out of the water and notifying everyone of what was happening,” Acting Inspector Emma Barnes told the ABC.

“I think it’s a fantastic effort — it was probably something you don’t want to see.”

“They have been really, really helpful. They have done a great job of alerting other people on the beach and other swimmers.”

An extensive search operation was scaled back overnight and is expected to resume at first light on Sunday.

Fisheries Minister Don Punch reached out to the family.

“On behalf of the State Government, I’d like to extend our heartfelt thoughts to the family of this man at this very difficult time,” he said.

“This is a terribly sad and distressing situation.”