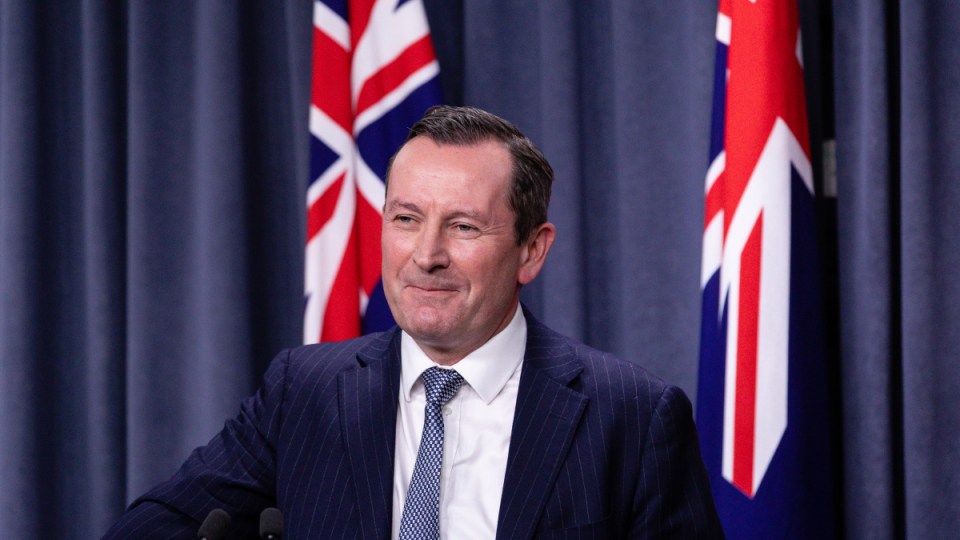 WA Premier Mark McGowan has thanked all involved in the investigation that led to the location of missing four-year-old Cleo Smith. Photo: AAP

Mr McGowan said he woke at 3am to a text message from WA Police Commissioner Chris Dawson, who had sent him a photograph of Cleo sitting “alive and well” on a hospital bed at 1.38am on Wednesday.

The Premier said it was “remarkable, exciting, uplifting news” to wake up to.

“We are all so pleased and so happy with the great news that little Cleo Smith has been found alive and well,” he said.

The moment Cleo was rescued 👏 pic.twitter.com/arusYi9kCa

Cleo was discovered in a locked home in her home town of Carnarvon on Wednesday morning after having been missing for 18 days.

She was found 50 kilometres from where she was last seen.

Police launched a desperate search for the girl after she disappeared from her tent during a stay at the Blowholes campsite, near Macleod, on October 16.

Mr McGowan said about 100 police officers were working full-time to find Cleo and were supported by a large number of community volunteers and a team of 10 analysts.

Police said a forensic lead led them to a property in Carnarvon, where they found Cleo just before 1am on Wednesday.

Mr McGowan said investigators “didn’t leave any stone unturned”, and that the investigation would receive attention from police forces “around the nation”.

“I think this will be looked at by police forces around the nation and, indeed, around the world, as to what can be done if you have the right people and the right way of looking at it, and [if] you do it methodically, [and with] determination, which is exactly what has occurred here,” he said.

“It is also a remarkably brazen and shocking thing to do, to go to someone’s campsite, unzip their tent, and take the little girl,” Mr McGowan said.

“It is beyond belief that someone would do that. Like many people, I love going out in a tent and camping, particularly with my children.

“The idea that someone would come and steal your child away is beyond awful.”

Mr McGowan said he told analysts he thought there would be a movie adaption of the extraordinary investigation over the past 18 days.

“I was talking to the analysts just now, and I said, ‘You know, there’ll be movies made about this’,” he said.

“I have some ideas as to who might play who, but they were very, very excited by what they had done.”

Mr McGowan confirmed the Police Commissioner was heading to Carnarvon from the Kimberley to assist.

“My message to all the locals in Carnarvon is thank you for helping solve this. The commissioner is going to Carnarvon from the Kimberley as we speak,” he said.

“He will be sending the same message as well. It is a time for joining together and sharing in the success of finding little Cleo, not engaging in anything else.”

How Cleo was discovered

Mr Blanch said “this is the outcome we all hoped and prayed for”.

“A police team broke their way into a locked house in Carnarvon about 1am,” he said.

“They found little Cleo in one of the rooms.

“One of the officers picked her up into his arms and asked her ‘What’s your name?’ She said, ‘My name is Cleo’.”

A 36-year-old man from Carnarvon is in custody and is being questioned in relation to the suspected abduction.

Police say he has no connection to Cleo’s family and was not present at the house when Cleo was found.

Police say it was a forensic lead that brought them to the property.

The girl has been reunited with her mother Ellie Smith and Ms Smith’s partner Jake Gliddon.

She is receiving medical care but is said to be in good physical health.

“We’ll have more to say on the rescue of Cleo as the day unfolds,” he said.

Commissioner Dawson told ABC Radio on Wednesday that police were very concerned for Cleo’s safety throughout the investigation, but followed every particular lead that they had.

“It was methodical, it was dedicated. It was skilled and it was dogged, but at the same time I’m thankful and I want to give credit to the parents,” the Commissioner said.

“We never lost hope, but the community, volunteers, companies, they all came out to help us and there was some really skilled work,” he said.

Commissioner Dawson said while he couldn’t release all the details of Cleo’s discovery yet, it came as police followed a ‘forensic lead’.

“We had been following a lot of the forensic leads and it led us to a particular house,” he said.

“I’ve seen the vision … he was in the house, the house was locked. We had to break down the door to get in. We’ve take an man into custody as well.”

Investigators said on Tuesday that they had spoken to more than 110 people who were at the campsite when she went missing but were yet to track down a driver of a car seen leaving in the middle of the night.

They believed she had been taken by an “opportunistic” offender.

Cleo was last seen by her mum Ellie Smith and stepfather Jake Gliddon when they put her to bed inside the family tent.

Ms Smith said she woke about 6am to discover the little girl was missing.

It was later confirmed the zipper on the tent was found open to a height Cleo could not have reached, seemingly ruling out the possibility she wandered off on her own.

Her red and black sleeping bag was also missing.

Mr McGowan said during the search, which stretched nationwide amid fears Cleo had been abducted and taken interstate, that every resource had been directed into finding the little girl.

The search for Cleo captured national attention, including in New South Wales where the state’s police commissioner on Wednesday recounted a call he had with Mr Dawson after Cleo was found.

“He said when he got the call this morning he broke down and cried,” Mick Fuller said of Commissioner Dawson while speaking on Sydney radio 2GB.

“It’s such an amazing story,” he said.

Commissioner Fuller praised WA Police for their “good old-fashioned police work”, adding he had feared the chances of finding Cleo alive were slim.

WA investigators spoke to more than 110 people who were at the campsite when Cleo went missing.

They sifted through more than 1000 calls to Crime Stoppers and trawled through vast amounts of materials for forensic clues.

They had also been searching for the driver of a car seen leaving in the campsite in the middle of the night before it was discovered the child was missing.

WA Police had suspected she was abducted by an “opportunistic” offender.

Police will hold a press conference later on Wednesday.

The WA government had offered a $1 million reward for information to find Cleo.

Cleo’s mother earlier posted repeatedly on social media begging for the return of her child.

In a public plea last week Ms Smith spoke of the pain the family was experiencing, describing the situation as “heartbreaking”, “heart-wrenching” and “completely scary”.

Meanwhile, vigils were held in the town of Carnavon, while shops and cars were plastered with posters and stickers calling for anybody with information about Cleo to report it.

Of the hundred police officers involved in the investigation, at least 50 were based in Carnarvon alone.

There were also more than 1000 calls to Crime Stoppers during the investigation.

‘There will be movies made about this’: McGowan rejoices as Cleo Smith found ‘alive and well’