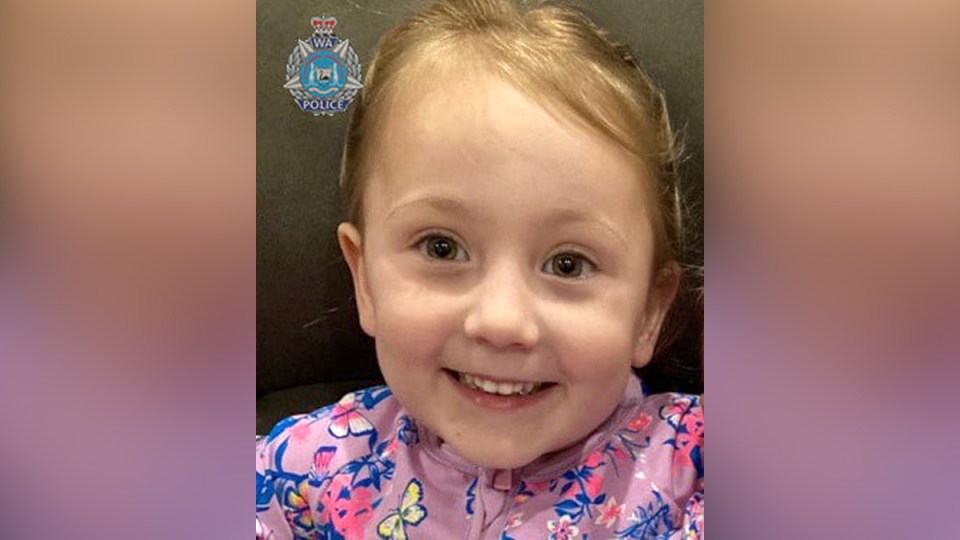 Cleo Smith was wearing a pink one-piece sleepsuit when she was last seen Photo: WA Police

The disappearance of a four-year-old girl from a WA campsite is “extremely concerning” and police say a search has yet to turn up any answers.

There are multiple reports that the homicide squad has joined the search for Cleo Smith as it entered its third day on Monday.

Cleo was last seen about 1.30am on Saturday at the Blowholes campsite on the coast at Macleod, north of Carnarvon. Her family woke to find her missing at 6am.

An air, land and sea search resumed on Monday morning with help from the SES and community volunteers.

“We are gravely concerned for the safety of Cleo and we’re not ruling anything out,” WA Police inspector Jon Munday said.

“We’re going as hard as we can for as long as we can to try to find Cleo.”

The girl was wearing a pink one-piece sleepsuit with a blue and yellow pattern when she was last seen. It emerged on Sunday that Cleo’s parents believe her sleeping bag is also missing.

“It’s been over 24 hours since I last seen the sparkle in my little girls eyes! Please help me find her,” she posted.

Earlier, Ms Smith posted that she had woken at 6am on Saturday to find her daughter wasn’t in their shared tent.

Inspector Munday said the family arrived in the area late on Friday afternoon.

He said he was “fairly confident” police were able to get the identities of all the people who were in the campsite at the time she disappeared, as well as gathering intelligence from dashcams and CCTV cameras in the vicinity to “paint a picture of who was around here”.

“We are greatly concerned for the safety of Cleo and we aren’t leaving anything to chance or ruling anything out,” Inspector Munday said on Sunday afternoon.

“We are going as hard as we can for as long as we can.”

Inspector Munday said detectives from Perth and Geraldton had arrived at the search area and despite the harsh environment, the weather was so far “conducive to someone surviving exposure to the elements”, but there were still no answers or major breakthroughs in the search.

Fears mount for 4yo girl missing from WA campsite