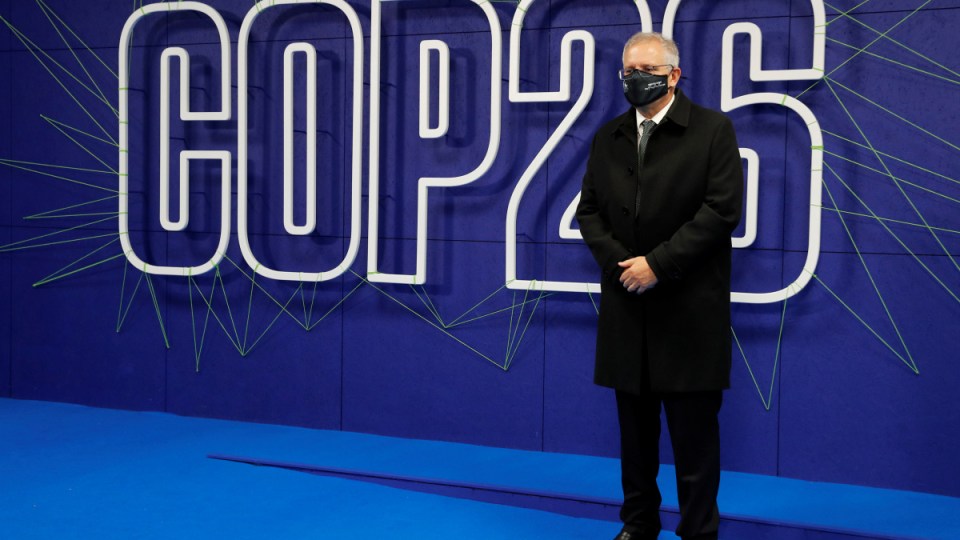 Prime Minister Scott Morrison has fired up at COP26 on Monday but refused to say how details were leaked. Photo: PA

Scott Morrison claimed criticisms of his government’s handling of the French submarine contract are “slurs”, as he attempted to fight off explosive claims from Emmanuel Macron that Australia had lied about the deal.

But even as the Prime Minister claimed he had told French President that their submarines deal was going to be cut, Mr Morrison refused to comment on how leaked texts between the leaders found their way into News Corp papers, which showed Mr Macron apparently unaware of the pending contract cancellation just two days before it was announced.

“It was not in our interest to proceed. I communicated that,” Mr Morrison said from a shipyard in Glasgow, before the COP26 climate summit.

The Coalition government was in damage control on Monday, following extraordinary claims from Mr Macron that he had been blindsided by Mr Morrison’s decision to scrap the $50 billion contract for French submarines and instead investigate nuclear boats with the United States and United Kingdom.

“I think this is detrimental to the reputation of your country and your Prime Minister,” the French president said.

When asked whether he thought Mr Morrison had lied about his intentions, Mr Macron replied: “I don’t think, I know”.

Mr Morrison on Monday morning (Australian time) said he didn’t agree with Mr Macron’s claims, and was backed up by senior ministers back home.

By Monday night (Australian time), the Prime Minister decided to lay out in detail his side of the story – focusing on a dinner he had with Mr Macron at the Élysée Palace presidential mansion in June, soon after the AUKUS deal was struck at the G7 in Britain.

Mr Morrison claimed that at that dinner, he had told Mr Macron of his concerns about the submarines contracted with France’s Naval Group.

“At that point I made it very clear that a conventional diesel-powered submarine was not going to meet Australia’s strategic requirements. We discussed that candidly,” the PM claimed.

“At our dinner, I gave the opportunity for the French to respond to the matters that I had raised, and that process took place over the next few months. Now we eventually formed the view that we would agree to disagree, that the Attack class submarine would not meet our requirements.”

Shortly before Mr Morrison’s press conference, the Daily Telegraph newspaper published claims – quoting “sources close to the talks” – that Mr Macron was aware the Naval Group contract was going to be torn up.

The News Corp paper also published a message purportedly from Mr Macron to Mr Morrison, two days before the AUKUS pact was announced and the Naval Group contract publicly terminated, where the French President asked “Should I expect good or bad news for our joint submarines ambitions?”

Mr Morrison claimed that message was in relation to attempts to organise a phone call with Mr Macron shortly before the AUKUS nuclear announcement.

He said he was unable to co-ordinate a time with the French.

“We believed absolutely that a conventional submarine wasn’t going to meet our strategic need. That’s why I went to dinner in Elysee, to tell him that … I needed to convey to him very clearly that we had big concerns about that boat meeting our needs,” Mr Morrison said.

However, the text message also potentially makes the case that, just two days before the AUKUS announcement and the public scrapping of the French deal, Mr Macron appeared to guess but was not certain that “bad news” may be coming.

Mr Morrison also declined to comment on how the text from Mr Macron ended up in the Telegraph.

“I’m not going to indulge your editorial on it,” he said when asked.

“But what I’ll simply say is this, is we were contacted when we were trying to set up the meeting, the call, and he made it pretty clear that he was concerned.

“He was concerned that this would be a phone call that would result in the decision of Australia not to proceed with the contract. And that happened several days before the decision was made.”

The federal Labor opposition has spoken of its concern about potential long-lasting damage to Australia’s relationship with France – one that Mr Macron referenced in his initial comments, noting Australian and French troops had fought together in wars.

The French President said the two nations had “common values”, and spoke warmly of visiting Australia in 2018.

Without directly accusing anyone or citing specific comments, Mr Morrison said he was upset by “statements that were made questioning Australia’s integrity”.

“Australia has a proud record when it comes to our defence capability. That’s why we will be building these.”

It was unclear exactly which comments he was referring to in calling out the “slurs”.