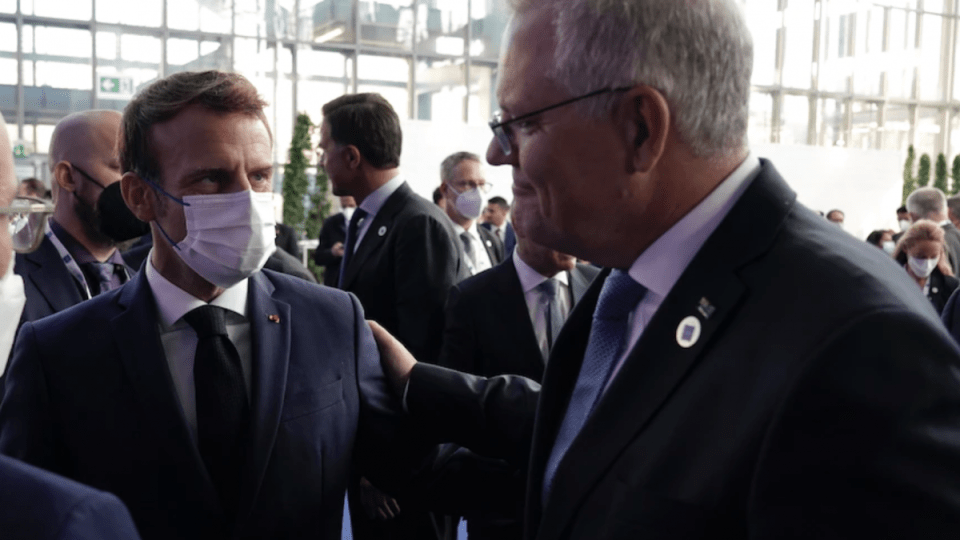 Mr Macron and Mr Morrison meet at the G20 on Saturday. Photo: Supplied

The federal government is in damage control after French president Emmanuel Macron accused Scott Morrison of lying to him about the scrapped submarines deal, with Labor claiming world leaders “can’t trust” the Prime Minister.

Mr Morrison has denied Mr Macron’s claims, claiming France was informed of the looming contract cancellation, but already frosty relations between Paris and Canberra have gotten even more icy in an embarrassing and unprecedented hiccup on the global stage.

“It is quite extraordinary. I cannot think of a world leader as senior as President Macron making statements like this about another world leader,” claimed Labor leader Anthony Albanese.

Mr Macron, cornered by Australian journalists at the G20 summit in Rome, took aim at the Morrison government’s decision to scrap a $50 billion contract for French submarines and instead plan nuclear-powered boats with the United States and United Kingdom.

“I think this is detrimental to the reputation of your country and your Prime Minister,” the French president said.

When asked whether he thought Mr Morrison had lied about his intentions, Mr Macron replied: “I don’t think, I know”.

It comes after US president Joe Biden admitted the orchestration of the AUKUS pact was “clumsy” but told Mr Macron that he “was under the impression that France had been informed long before” the announcement.

Not long before Mr Macron’s rebuke, Mr Morrison’s official photographer had posted photos of the two leaders shaking hands and smiling over a coffee at the G20 summit.

“I don’t agree with that… It’s not true,” he said, when asked about Mr Macron’s words.

“I explained very clearly that the conventional submarine option was not going to meet Australia’s interests.”

However, Mr Morrison also noted he didn’t explicitly tell Mr Macron that Australia was going with a nuclear option, saying it was “a matter that was secure to Australia and our partners” that he didn’t “engage in in any sort of broad conversation about”.

In a spiky press conference, Mr Morrison initially claimed the Australian journalists were “getting selfies with” Mr Macron – an allegation the media pack vehemently denied as “totally untrue”.

After being corrected by another reporter during his press conference, Mr Morrison conceded he “must have been misinformed”.

Treasurer Josh Frydenberg told the ABC it was “a positive step” that Mr Macron and Mr Morrison were talking again, following weeks of France keeping Australia in the diplomatic deep-freeze, but also admitted “there’s clearly a lot of work still to be done.”

“We’re thinking about how to build that partnership back,” Mr Frydenberg said.

Nationals leader Barnaby Joyce, acting as PM this week with Mr Morrison overseas, said he hoped the two nations could “get over this and move on”.

“It was a contract. We didn’t steal an island. We didn’t deface the Eiffel Tower,” Mr Joyce said.

Labor has seized on the stunning criticism from Mr Macron, with multiple MPs clipping video of the exchange and posting it to their social media channels within hours of it occurring.

“What you need when you deal with international relations and with diplomacy, is honesty and integrity. And the fact is that President Macron has said very clearly and unequivocally that Scott Morrison did not tell him,” Mr Albanese said.

“President Macron has expressed his views about Scott Morrison clearly and unequivocally. And that’s a great shame.”

“I can’t recall any instance ever where a world leader has expressed such disappointment in an Australian leader on a matter of fundamental integrity,” he said.

Mr Morrison is now in Glasgow, where the COP26 climate summit is due to begin today. World leaders will discuss plans for carbon neutrality by 2050, as well as pushing for deeper emissions cuts by the crucial 2030 deadline that scientists say is the critical window to avoid locking in irreversible climate change.

“If we don’t act now, the Paris agreement will be looked at in the future not as the moment humanity opened its eyes to the problem, but the moment we flinched and looked away,” he said.