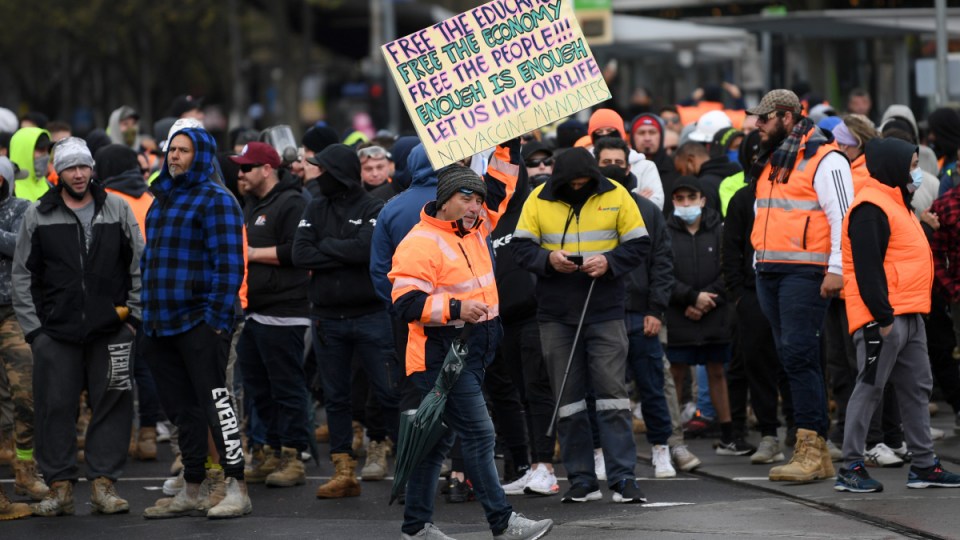 Minister David Littleproud has branded protesters as scum who need to be locked up indefinitely. Photo: AAP

Hundreds of protesters have swarmed Melbourne for a second day, massing outside state parliament and the CFMEU building as tensions with police threaten to again explode over vaccine mandates and a construction ban in Victoria.

Anti-vaxxer and anti-lockdown groups have heavily promoted the protest on their social media channels, with union leaders claiming Monday’s violence protest had been infiltrated by far-right groups and was not driven by ordinary workers.

By 11am on Tuesday, hundreds of protesters – most wearing high-vis shirts – had gathered outside Melbourne’s Queen Victoria Market, in a stand-off with massed riot police and mounted units guarding the nearby CFMEU headquarters.

Around 11.30am, protesters moved en masse down Victoria Street, letting off flares and fireworks as the group blocked traffic. Around 12pm, a large group of protesters had gathered outside the state parliament building.

Vision from the scene showed a Channel Seven reporter being tackled by several protesters, and later hit in the back of the head with a can of drink in the middle of a live cross. He also said he and his cameraman had been doused in a liquid that he claimed was urine.

“There were some who were construction workers. But I’m saying and I think I’m sure the police are aware of this too, that there is a very small group of people, not just in Melbourne but around the country, hard-right extremists who are trying to weaponise the COVID lockdown,” Labor MP and former union leader Bill Shorten said of Monday’s wild scenes.

“There is a network of hard right man-baby Nazis, just people who just want to cause trouble.”

Police have asked the crowd to disperse.

Smaller groups of union members gathered outside the CFMEU building on Monday morning, before their numbers were bolstered by anti-vaxxer and anti-lockdown groups, who called for their followers to join in through the day.

It followed related protests in Melbourne in recent days, including a street sit-in by builders opposing a closure of construction site tea rooms, and violent scenes in a larger protest over the weekend.

Partly in response to the protests, and following a spike in the number of construction workers contracting COVID, the Victorian government announced a two-week shutdown of the building industry.

Overnight, anti-lockdown activists in Melbourne called for further protests on Tuesday, asking followers of their social media groups – some with tens of thousands of members – to “rally for freedom” against the vaccine mandate. In messages seen by The New Daily in encrypted social media groups, protesters were asked to “wear work gear” and bring friends and family to the rally.

Anti-lockdown groups have called for vaccine and mask mandates to end, and for senior state politicians and officials to resign from their jobs.

The protests have been supported and promoted on social media by far-right extremists and anti-vaxxer groups. TND identified several prominent far-right ‘identities’ at Monday’s rally.

“There were some construction workers in the crowd, according to my sources, but there are a lot of other just professional troublemakers,” he said.

“Some of those people in the crowd were construction workers, but others, I’m reliably informed, were fake tradies. They’d been down to the Reject Shop and got themselves $2 high-vis hoodies so they could pretend they were construction.”

“The crowd was heavily infiltrated by neo-Nazis and other right wing extremist groups and it is clear that a minority of those who participated were actual union members,” CFMEU national construction secretary Dave Noonan said in a statement.