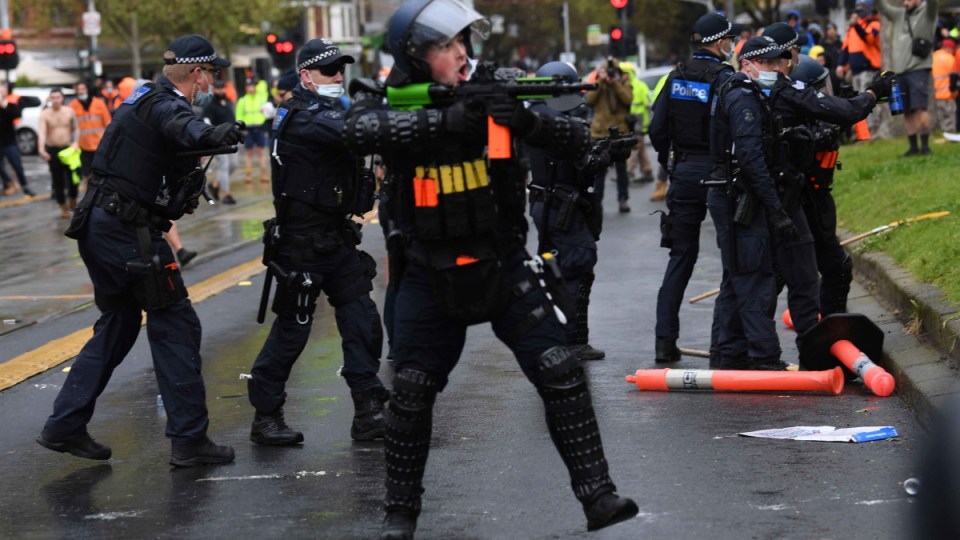 Police in riot gear have confronted protesters at the Melbourne headquarters of the CFMEU. Photo: AAP

The construction industry in Melbourne and other parts of Victoria will be shut down for two weeks following a violent protest outside the CFMEU’s headquarters.

The closure across Metropolitan Melbourne, Geelong, the Surf Coast, Ballarat and Mitchell Shire was decided on Monday night after the CFMEU building was damaged and riot police deployed in chaotic scenes in the CBD.

“We’ve been clear: If you don’t follow the rules, we won’t hesitate to take action – we have seen widespread non-compliance across the industry and that’s why we’re taking necessary steps to protect every single Victorian,” he said in a statement.

“We put the industry on notice just a week ago. We have seen appalling behaviour on site and on our streets, and now we’re acting decisively and without hesitation.”

Industrial Relations Minister Tim Pallas says all construction in Melbourne, Ballarat, Geelong, Surf Coast and Mitchell Shire will stop for two weeks. All workers must have one dose of a COVID- 19 vaccine before they return to site on October 5. Statement: pic.twitter.com/6VKbvhuSPB

The government said all sites will need to demonstrate compliance with the Chief Health Officer’s directions before reopening, including the requirement for workers to show evidence of having had one dose of a COVID-19 vaccine before they return to work on October 5.

“The Liberal Nationals condemn the violent protests, but the actions of a few should not be used as an excuse to shut down an entire industry, putting tens of thousands of people out of work,” she said in a statement.

On Monday riot police used rubber bullets and pepper spray to disperse an angry mob protesting against mandatory vaccines for construction workers outside the Melbourne headquarters of the CFMEU.

But the union says the protest was overtaken by “neo-Nazis and right-wing extremists”, rather than CFMEU members.

The ACTU condemns the violent attack on the CFMEU Construction Victorian office orchestrated by violent right-wing extremists and anti-vaccination activists.

This violent attack on union property which endangered union officials, staff and the public was reprehensible. pic.twitter.com/BRDBpZ6EFu

Victoria Police say several people were arrested as the crowd “grew increasingly hostile” during the protest that began before 9am.

Hundreds of construction workers wearing high-vis, and their supporters, stormed the building, protesting against new mandatory vaccination rules for the building industry.

Mr Setka was met with boos and insults from the crowd, while some protesters hurled bottles.

“Please calm down. Can you at least give me the respect to talk? We’re not the enemy. I don’t know what you have heard,” he told protesters.

“I have never, ever said I support mandatory vaccination.”

Once Mr Setka went back inside, the protesters smashed a glass door to the building.

The Victorian branch of the union released a statement just after 4pm, saying it has always supported freedom of choice regarding vaccination.

“We are not going to be intimidated by outside extremists attempting to intimidate the union, by spreading misinformation and lies about the union’s position,” the statement said.

CFMEU national construction secretary released a statement on Monday night accusing the crowd of being “infiltrated by neo-Nazis and other right-wing extremist groups”.

“It is clear that a minority of those who participated were actual union members,” Dave Noonan said.

There had been a 25 per cent cap on the industry’s workforce in Victoria, with tradies required to have had their first dose of a vaccine by this Thursday in order to be allowed back to work.

It is unclear whether all of those protesting are construction workers, after a message on the Melbourne Freedom Rally Telegram group encouraged anti-lockdown protesters to join them.

Premier Daniel Andrews said the protests were “not smart, they are not safe”.