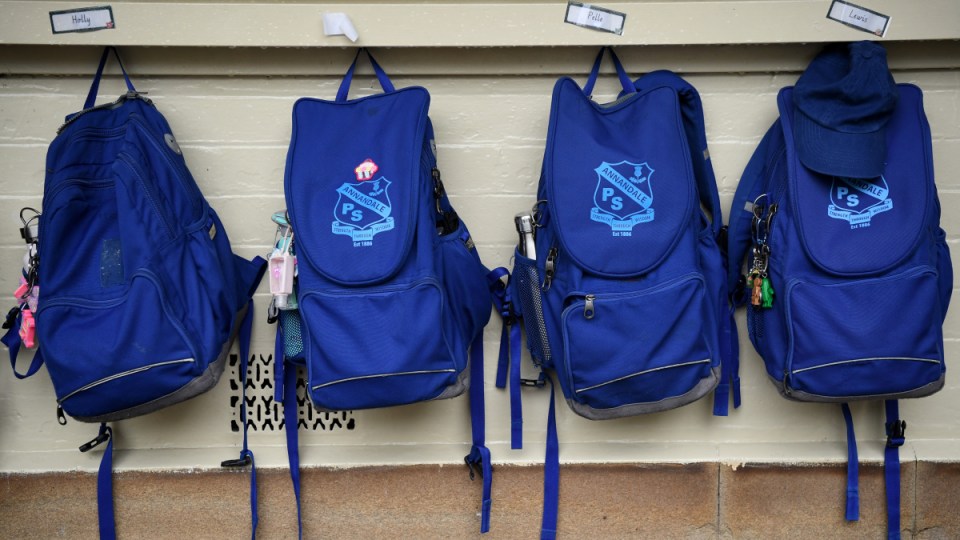 COVID jabs could be given in schools, the AMA says. Photo: AAP

Australia hopes to start giving COVID-19 vaccines to five-year-olds by the end of the year, with the federal government urging Pfizer to lodge applications to jab children as soon as possible.

Despite leading paediatric experts saying children “overwhelmingly” feel only mild or zero effects from the virus, epidemiologists say vaccinating young people could be among the best ways to stop transmission and lower COVID-19 infection rates.

But even as Australia looks to vaccinate some of the nation’s youngest, other experts still warn that schools need to re-evaluate ventilation and air purification systems as students return to the classroom.

Pfizer announced on Monday that a trial of its vaccine in children aged five to 11 found a “strong foundation” to inoculate youths.

Currently Pfizer is only approved for children over 12 in Australia and other nations, but the company plans to lodge paperwork for approval in younger kids in the United States in coming weeks.

He said the federal government would make vaccinating the very young a “priority”, if approved by medical regulators.

“I am heartened by your advice that trials of the Pfizer vaccine are showing promise in children under the age of 12 years,” Mr Hunt wrote.

“I encourage and invite Pfizer to submit a parallel application to the TGA for Australian regulatory approval at the earliest possible time.”

Australia has about 26 million more Pfizer doses contracted for 2021, and another 60 million on order for 2022.

Australia’s vaccination targets of 70 and 80 per cent for reopening are currently based on the population aged over 16; however, jurisdictions including the Australian Capital Territory are also calculating the vaccination rate of those over 12.

It is unclear whether extending vaccination rates to those as young as five will see federal or state governments change their calculations on vaccination coverage and reopening.

Vaccinations for the entire 12 to 15 age group only opened last week, but already more than 179,000, or 14.4 per cent of that cohort, have received a first dose.

Australia’s chief nursing and midwifery officer Alison McMillan said it was “possible” that Pfizer jabs for five-year-olds would commence this year.

“The likelihood is we will see it through general practice,” Professor McMillan told a Canberra press conference.

“We have an incredibly successful childhood vaccination program in Australia.”

Professor McMillan said that, if it was decided that booster shots were required for COVID-19 vaccinations, then there may be a school-based program for Pfizer.

She declined to speculate on whether COVID-19 jabs may become mandatory for children.

Dr Khorshid, appearing before the Senate’s select committee on COVID-19, said the AMA would welcome vaccinations for all children who are eligible.

The institute is conducting research into why children’s immune systems produce higher levels of resilience to the virus.

“Even with Delta, children overwhelmingly experience mild or no symptoms,” Professor Goldfeld said.

“Around 1 per cent of infected children will be admitted to hospital. Death is rare.”

But the committee also heard from paediatrician Dr Greg Kelly, who warned that Australia’s hospital intensive care units for children had only a limited capacity.

“Our small paediatric health system could be overrun by even a small number of cases,” he said.

Professor Andrew Steer, also of the Murdoch Institute, was asked in the hearing if it would be safe for children to return to school without being vaccinated against COVID-19.

He suggested other measures to keep kids safe, including vaccination of teachers and school staff, masks for older children and “encouraging” masks for younger children, better classroom ventilation, and staggering the times different groups of students are at school.

The hearing also heard from several independent epidemiologists, who said that despite the lower risk to children from COVID-19, that it was important they be vaccinated.

Professor Mary-Louise McLaws, from the University of NSW, said young people aged under 40 were crucial to get vaccinated as soon as possible, saying they were the ones driving current Delta infections due to higher social movement and interactions.

She called the 0 to 19 and 20 to 39 age cohorts “the two most important priority groups”, and complained they had been “at the back of the queue” until recently.

“It will spread if we don’t get those 20- to 39-year-olds vaccinated as soon as possible,” Professor McLaws told the Senate hearing, calling for a “priority line” for young people.

Professor Raina MacIntyre, from UNSW and the Kirby Institute, said schools should be investing now in air purifier systems and better ventilation for classrooms, to lower COVID-19 risk.

She said that could be as simple as opening more windows in schools.

However, Professor MacIntyre said that since bushfire season was approaching – just when Australia could expect a second COVID-19 peak in December, according to Victorian modelling – that air purifiers, rather than opening windows and risking smoke problems, may be a more realistic option.

School-based vaccinations for five-year-olds on agenda, as Pfizer seeks approval