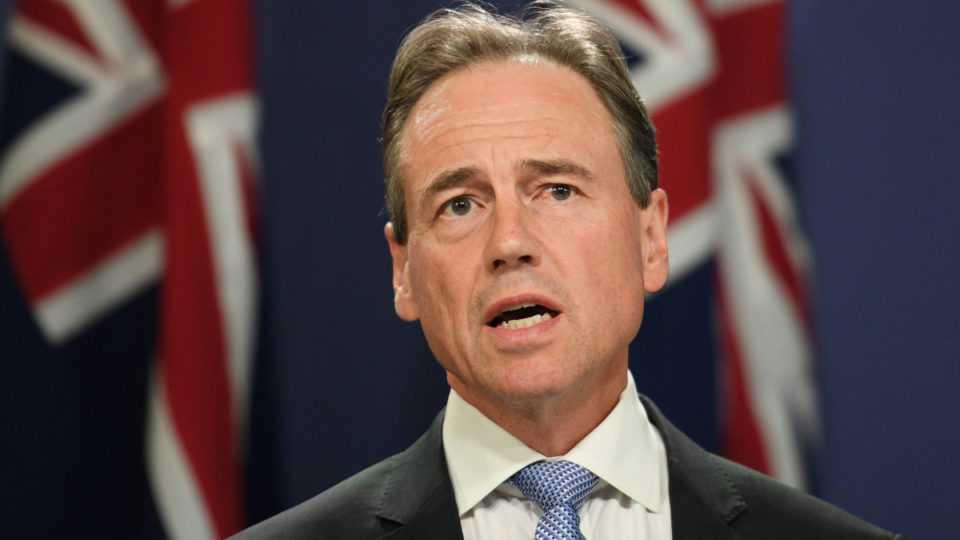 A potential issue affecting Australia’s supply of Pfizer vaccines has been “resolved”, Health Minister Greg Hunt has promised, downplaying concerns from Daniel Andrews over a dip in COVID jabs next month.

But while Pfizer also denies there has been any interruption to Australian supply, the company has flagged it “may be necessary to adjust” the level of its shipments over the course of the year in response to potential spikes in global demand and manufacturing issues.

The federal health department says more than 9.3 million Pfizer doses are due to arrive in the country in October, which is when the nation is set to hit the 70 per cent double-vaccination milestone.

On Monday he said he was unsure “how big a problem it is” but stressed “that [it] is not the federal government’s fault”.

Instead, Mr Andrews urged Victorians to consider booking an appointment for the AstraZeneca jab, instead of waiting for the Pfizer vaccine.

“There may be an international global supply chain problem,” he claimed.

Meanwhile, Mr Barr complained the ACT would receive no boost to its state government mass clinics, with projections that there would only be an increase to federal government-backed GPs and clinics.

But Mr Hunt waved away those concerns, claiming the issues flagged at national cabinet had now been rectified.

The Health Minister did not elaborate on the cause of the earlier concern.

In a statement, a Pfizer spokeswoman also downplayed talk of a supply issue.

She said the company’s negotiations with the government were “confidential”, but that it was committed to meeting its supply commitments by year’s end.

“We expect the remainder of the 40 million doses we are contracted to supply to Australia to be delivered by the end of 2021,” the Pfizer spokeswoman told TND.

“Due to the nature of pandemic supply, it may be necessary to adjust quarterly allocated volumes depending on overall global demand and manufacturing capacity, however we remain on track to deliver the total committed doses for [quarter four] 2021.”

Pfizer said it continued “to work tirelessly to ensure that deliveries to Australia remain on track”.

Mr Hunt said the government expected “all of our contracted anticipated deliveries will arrive in full” next month, which would result in an increase in mRNA doses in October compared to September.

The federal health department told TND it was expecting, on the latest projections, 9.3 million doses of Pfizer to arrive in October.

They will be joined by another three million doses of Moderna.

“Pfizer has confirmed to the government they still expect to deliver 9.3 million doses in October,” a department spokesperson said.

“Operation COVID Shield is currently finalising the October weekly delivery schedule with Pfizer and will be releasing an updated Allocations Horizons once the details of the weekly deliveries are confirmed.”

Asked about Mr Barr’s concerns, the department also said the ACT’s allocation of mRNA doses – Pfizer and Moderna – would nearly double between August and October, from 117,000 to 227,000.

“The ACT will receive 190,400 Pfizer doses in October. This is an increase of 42,407 doses on what was provided in September,” the spokesperson said.

Of that October increase, 1770 will go to the ACT’s state clinics, and 39,282 will go to federal-run primary care.

The territory is also slated to receive 37,360 Moderna mRNA vaccines in October.

“The ACT has consistently received above its per capital allocation and this is evidenced by the high vaccination rates in the ACT,” the department said.

Mr Hunt was also buoyed by record vaccination numbers for a weekend, with 399,616 jabs administered on Saturday and Sunday.

The latest figures took Australia to 24,792,054 total doses, including 47.0 per cent of Australians over 16 now fully vaccinated with two jabs.

Nationally, 72.1 per cent of the over-16 population has received at least one dose of vaccine.

Data tracking tool COVIDLive.com.au projects Australia will hit a national average of 70 per cent double-vaccination by October 27 and 80 per cent by November 11.

Those are key dates for states to begin easing restrictions under the national roadmap for reopening, with national cabinet agreeing a jurisdiction can only trigger reopening changes once its own vaccination rate and the national average are above the 70 and 80 per cent marks.

“We have been able to bring forward the capacity for every Australian to have vaccinations before the end of October. Now, it’s up to the Australian public,” Mr Hunt said.