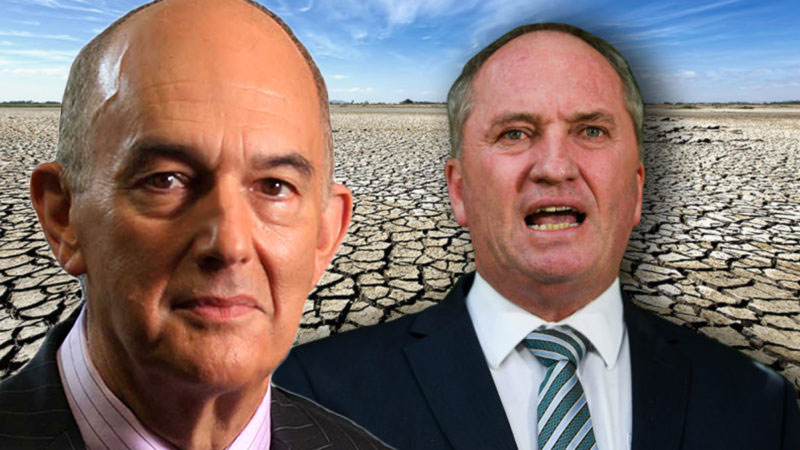 Barnaby Joyce and the Nationals are happy to see the PM talk the talk on emissions as long as he doesn’t dare walk the walk. Photo: TND
opinion

Scott Morrison is hoping the vaccine scarcity that has led to the lockdown of half the nation’s population will be close to resolution by December, and along with it a reversal of his political fortunes.

But as fate would have it, that timetable coincides with our next summer.

And if the shocking experience of extreme weather in the northern hemisphere is any guide, scientists are warning, Australia will face similar catastrophes.

It was the Prime Minister’s tin-ear response to the Back Summer fires in 2019-20 that last saw support for himself and the government collapse.

Ironically, the arrival of the pandemic and Morrison’s initial handling of it restored his reputation.

Helping in this recovery was the fact Morrison led a united government where any misgivings over vaccine bungling were kept in house and the Prime Minister was able to get on with the job.

He will not be so lucky if the increasingly extreme weather events again trigger demands that Australia play a bigger part in emissions reduction and serious climate change action.

Former prime minister Malcolm Turnbull may well have described the failure to provide adequate and timely vaccines for Australia as “the greatest public policy failure in memory”, but there is compelling evidence that the 2019-20 disaster in eastern Australia dramatically tipped public opinion to seeing climate denial and complacency in the same way.

An acid test on whether Morrison has learned the lessons of that searing summer will come at the COP26 Climate Summit in Glasgow in November.

The portents are not good, thanks to the return of Barnaby Joyce to the leadership of the Nationals and role of Deputy Prime Minister.

On weekend television, Joyce sounded more like an opposition leader when he demanded “a menu” with a price tag before he was willing to order any dish that looked or smelled like “net-zero emissions by 2050”.

Joyce apparently forgot that it was “preferred” government policy and not something that Labor or the Greens were pushing; he certainly seemed to forget he was now able to demand treasury and other key departments do the work.

Joyce backed away from reports he believed there was zero chance of getting net zero through his party room.

His revised position – although he claimed it is what he thought all along – was that the Nationals wanted to see “exactly what’s involved, and we want to see exactly what the cost is”.

As if already there is no cost demonstrated by extreme weather events which had devastated communities in Australia and elsewhere, surely toting up Black Summer’s bill would be enough?

There are none so blind as those who do not want to see.

What chance is there of Nationals like Senator Matt Canavan being convinced of the need for any serious emissions reduction action?

The former resources minister says the rest of the world is merely paying lip service and how can you believe anything communist China commits to – a convenient cover for the billions of dollars in payments for our exports he prioritises over the fate of life on the planet.

The planet won’t be fooled by political spin, just as the commercial realities of vaccine purchases took no notice of Morrison’s claims we were “at the front of the queue”.

Joyce and the Nationals are happy to see the Prime Minister talk the talk on emissions reduction as long as he doesn’t dare walk the walk.

“Technology, not taxes” is a slogan Tony Abbott would be proud of, but where is the bold commitment to proven technologies like electric vehicles? A few electric plug-in points definitely do not cut the mustard.

And it is not as if credible economic modelling has not been done: Deloitte Access Economics released comprehensive analysis in a report in November, A New Choice – Australia’s Climate for Growth.

The report’s conclusions were at once sobering and promising.

It found unchecked climate change will cost Australia’s economy $3.4 trillion and 880,000 jobs over coming decades – whereas action can create an additional $680 billion of GDP and more than 250,000 jobs.

More than enough data for the Prime Minister in the five months ahead of Glasgow to prepare a better response than the one he managed for vaccines.