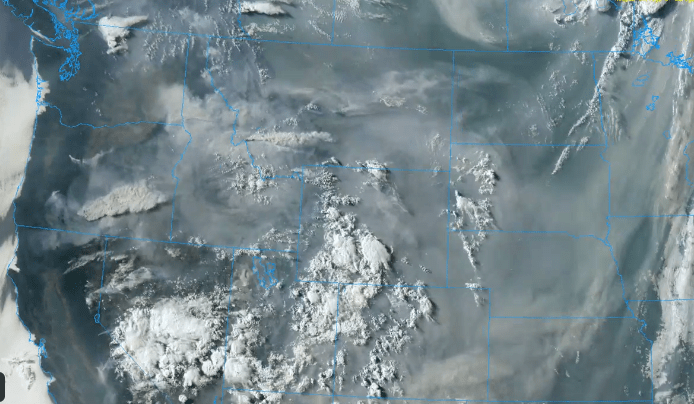 That's smoke, not clouds, blanketing the US western states as wildfires rage out of control. Photo: US National Weather Service

US firefighters are scrambling to contain blazes fanned into fury by high, drought and climate change that continue to burn across the western United States.

A rapidly growing wildfire south of Lake Tahoe jumped a highway, prompting more evacuation orders and the cancellation of an extreme bike ride through the Sierra Nevada on Saturday as critically dangerous wildfire weather loomed in the coming days.

The Tamarack Fire, which was sparked by lightning on July 4, exploded overnight and was over 80 square kilometres)as of Saturday evening, according to the Humboldt-Toiyabe National Forest.

Saturday’s ride was supposed to mark the 40th Death Ride, which attracts thousands of cyclists to the region each year to ride through three mountain passes in the so-called California Alps. It was cancelled last year during the coronavirus outbreak.

Afternoon winds blowing at 30-50km/h fanned the flames as they chewed through bone-dry timber and brush.

Meteorologists predicted critically dangerous fire weather through at least Monday in both California and southern Oregon, where the largest wildfire in the US continued to race through forests.

The Bootleg Fire grew significantly overnight on Saturday as dry and windy conditions took hold in the area, but containment of the inferno more than tripled as firefighters began to gain more control along its western flank.

The fire was still burning rapidly and dangerously along its southern and eastern flanks, however, and authorities expanded evacuations in a largely rural area of lakes and wildlife refuges.

The fire is now 1100 square kilometres in size.

Dry and getting worse

Climate change has made the West much warmer and drier in the past 30 years and will continue to make weather more extreme and wildfires more frequent and destructive.

In southern Oregon, fire crews have dealt with dangerous and extreme fire conditions, including massive “fire clouds” that rise up to 10km above the blaze. The Bootleg Fire has destroyed at least 67 homes and 117 outbuildings.

The conflagration has forced 2000 people to evacuate and is threatening 5000 buildings, including homes and smaller structures in a rural area just north of the California border.

The Tamarack Fire sent heavy smoke over Lake Tahoe and into Nevada.

The National Weather Service warned of possible thunderstorms stretching from the California coast to northern Montana on Sunday and that “new lightning ignitions” are likely because of extremely dry fuels across the West.

Firefighters said in July they were facing conditions more typical of late summer or autumn.

The fires were just two of numerous fires burning across the drought-stricken US West, as new fires popped up or grew rapidly in Oregon and California.

There were 70 active large fires and complexes of multiple fires that have burned nearly 4300 square kilometres in the US, the National Interagency Fire Center said.

The US Forest Service said at least 16 major fires were burning in the Pacific Northwest alone.