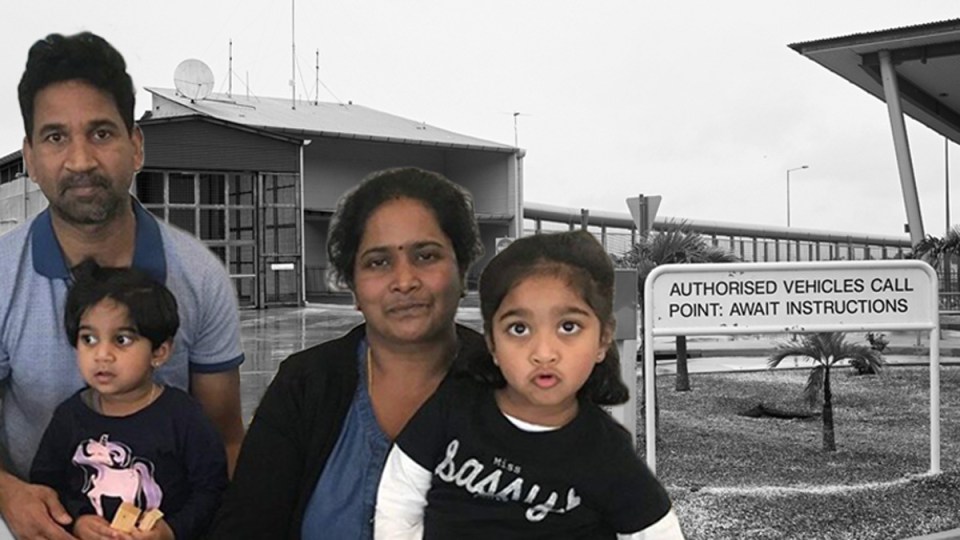 The Murugappan family from Biloela are gaining support from politicians across the parties. Photo: TND

The ongoing detention of the Biloela family is nudging cracks in the Coalition, with MPs split between support for their freedom and maintaining a hard stance as a form of deterrence.

Former crossbench colleagues Kerryn Phelps and Zali Steggall have called out Liberal MPs for being “complicit” in the ongoing detention of Biloela’s Murugappan family, as a growing number of government politicians call for a resolution to their Christmas Island limbo.

But not all Coalition members are agitating for a backflip on the Tamil family’s detention, with Queensland senator Gerard Rennick claiming the government would risk encouraging “anchor” babies in immigration detention if it changed course.

Immigration Minister Alex Hawke is expected to make a final decision within days on their future.

“I feel sorry for the children, but the children are being used by activists and their parents as a means of staying here,” Senator Rennick told The New Daily.

It’s in stark contrast to Member for Higgins Katie Allen, who said their detention has gone on “for too long”.

Over the weekend, as Tharnicaa marked her fourth birthday in a Perth hospital, several Liberal members broke ranks and called for the family to be settled in Australia.

Moderate Coalition MPs Trent Zimmerman and Jason Falinski joined Dr Allen, adding their voices to the push to free the Tamil family of four from detention.

Veteran MP Ken O’Dowd, the Member for Flynn – which takes in the regional Queensland town of Biloela – also said they should be allowed to return home.

The federal government says the family – including another daughter Kopika, now six – have been found to not be refugees, and are therefore ineligible for settlement in Australia.

But Mr Hawke is considering a legal brief on their case, and whether to step in to grant them a visa anyway using legislative powers afforded to the minister.

The decision on whether they will be allowed to resettle in Australia could be just days away.

Dr Allen, a paediatrician before entering Parliament, called on the government to consider “alternatives such as Section 195a of the Migration Act to solve the legal impasse”.

That subsection gives the Immigration Minister broad powers to grant a visa if they think it’s “in the public interest to do so”.

Mr Zimmerman, the Member for North Sydney, said the family should be “allowed to settle in the community”.

But both Ms Steggall, the Member for Warringah, and Dr Phelps, the former Member for Wentworth, heaped scorn on the Coalition members for waiting this long to speak up.

Both independent MPs were key in passing the controversial ‘Medevac‘ bill in 2019, which gave refugees in offshore detention greater protections to seek medical help in Australia.

It was later repealed by the Coalition after Dr Phelps was not returned at the 2019 election.

In response to Dr Allen’s calls for a “timely resolution” to the Biloela family detention, Dr Phelps tweeted: “We needed a timely resolution to politically motivated endangerment of people seeking asylum when Medevac legislation was passed, and then Liberal MPs and Senators voted to repeal it.”

In response to Mr Zimmerman, Ms Steggall tweeted “Nothing like a looming election and being called out for being complicit with your vote”.

Thousands of supporters and activists held rallies in support of the family across the country in recent days, including one outside Perth Children’s Hospital where Tharnicaa is staying.

A family spokesperson said the girl remained under observation, in a stable condition.

“We welcome every politician who joins the growing call to end this three-year nightmare for Priya and her family,” said family friend and Home to Bilo group organiser Angela Fredericks.

“For Liberal and National MPs to speak out in this manner gives us some much-needed hope, but we remind them that the safety and wellbeing of a young family is at stake. Now is the time for more than words.”

TND reached out and spoke to numerous Liberal MPs over the weekend for comment on the Biloela family’s situation.

Few were willing to go on the record.

Senator Rennick said he was “surprised” his colleagues from the southern states had called for the Muruguppans to be resettled in Australia.

He pointed out it was “only four out of 112” Coalition members who had spoken in support of bringing the family here.

“My fear is, you make an exception for one family, and this is why the activists are making this a big story. It’ll wedge the door open and we’ll run the risk of people coming by boats again,” Senator Rennick told TND.

“You could start the precedent of refugees having children in detention to stay.”

The Queensland senator, who said he had “a lot of friends in Biloela”, stressed he “felt very sorry for the children”.

“But there’s no civil war [in Sri Lanka] now. It ended a decade ago. It’s not like we’re sending them back to war-torn countries,” he said.

“The people jumping up and down about it are a small minority of activists trying to paint a picture of the town of Biloela … If we do it for this family, there’s a fair argument you’re encouraging people to use children for political purposes.”