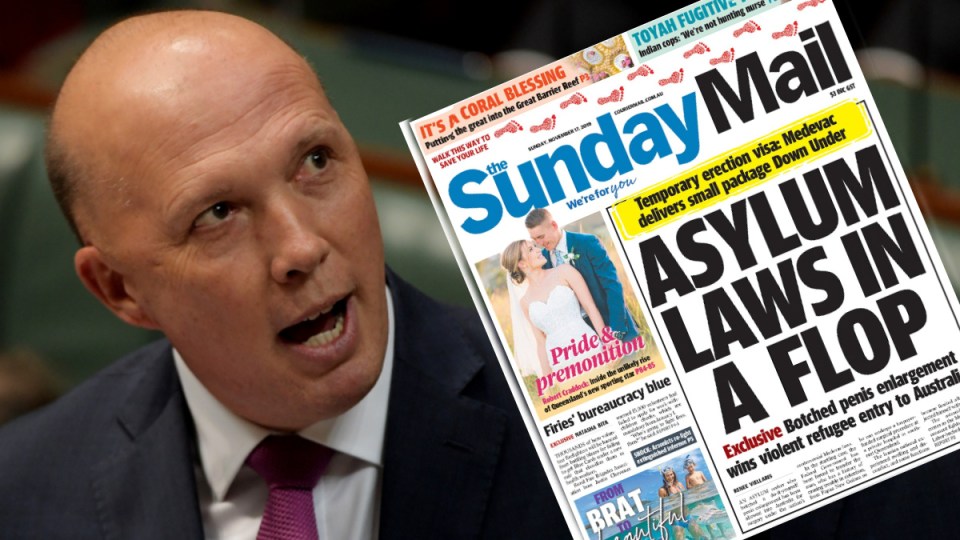 It's unlikely a pun-loving journalist wouldn't go hard on this – but there must be a story behind the story. Photo: Getty/ Twitter
analysis

Peter Dutton is bringing out the big guns as the deadline to repeal the Medevac laws before Christmas looms: His reluctant approval of medical treatment to repair an asylum seeker’s botched DIY penis enlargement.

In the case of the DIY penis enlargement, Australians learned on Sunday that the gentleman had injected his penis with palm oil in Papua New Guinea and was now seeking genital surgery to repair the damage.

Mr Dutton claims it’s an example of why the laws are not working because while he does have the right to refuse entry to Australia under the laws, it is only under limited grounds.

The man, who has been in south-east Queensland for three weeks, is expected to undergo a penis reconstruction in a private hospital at taxpayer expense.

Dr Kerryn Phelps, one of the architects of the original legislation, slammed the leaks as a shocking breach of medical ethics.

“The important question is this: Given the limited number of people with access to confidential medical records, who breached this patient’s privacy and leaked a selective part of a medical history to a journalist in an attempt to score a cheap political point against Medevac?

“This is a shocking breach of ethics.

“Bear in mind that the minister approved the medically-recommended transfer of this patient.”

The Daily Mail‘s headline was: ‘Revealed: Refugee who botched his DIY penis enlargement is flown to Australia from Papua New Guinea to undergo reconstruction surgery – and YOU will pay for it.’

On News Corp columnist Andrew Bolt’s popular blog the headline was, WE PAY FOR ILLEGAL IMMIGRANT WHO INFLATED HIS PENIS. “Gosh, Labor’s Medevac laws are working well,” he wrote.

The stories are generally dropped to Home Affairs Minister Peter Dutton’s home town newspaper, The Courier-Mail, and then syndicated across News Corp.

On Sunday, it reported on the botched penis enlargement as a ‘‘sensational example of how broadly Labor’s Medevac laws are being applied by doctors, it can be revealed the Iranian man will get the specialised, expensive surgery at a private hospital in south-east Queensland, with Australian taxpayers picking up the tab’’.

The news story said a female doctor ordered the Iranian national to Australia under the Medevac laws for penis surgery after he experienced swelling, discomfort and limited function.

The report also detailed evidence collected by the Morrison government that the man with the penis problem was a troublemaker.

He was allegedly involved in almost 50 incidents – including his arrest for throwing boiling water on a security guard and punching another man for confiscating his pornography he was watching – although these charges were dismissed.

When the laws were passed a year ago by Labor, the Greens and cross-benchers in defiance of the Morrison government, Mr Dutton warned that rapists, murderers and child sex offenders could be brought to Australia under the laws.

“Allowing people to come into our country who have serious allegations of sexual assault or being involved in sexual relationships with young girls … one person has been accused of murder, out of Iran,” Mr Dutton said.

“Under the Labor Party bill, or now law, we cannot stop that person from coming in.”

But supporters argue that Mr Dutton would still have powers to reject applications on security grounds under the Medevac laws.

Last month, he did just that and blocked the transfer of a refugee on security grounds.

The story was also briefed to the Courier Mail, with Mr Dutton later making a statement to Parliament.

Mr Dutton said he refused the transfer on October 11 under section 198G(2) of the Migration Act, because he reasonably believed the individual “would expose the Australian community to a serious risk of criminal conduct”.

“The Department of Home Affairs has advised me that the accompanying family member has a history of violent and manipulative behaviour, including allegations of physical assault against his children, been investigated by the Nauruan police force for criminal activity, engaged in military service in Iran, and that the department has been unable to verify his identity,” he said.

Parliament will consider Mr Dutton’s legislation to repeal the Medevac laws in the final sitting fortnight of the year.

The vote of Tasmanian Senator Jacqui Lambie is critical and she is yet to declare her hand.

Independent cross-bencher Rebekha Sharkie said it was ‘‘bizarre’’ the Morrison government was trying to whip up a controversy about laws that were working.

‘”This is a desperate attempt,” Senator Sharkie said.

“We have detained people indefinitely for six years, who have not been found guilty of a crime. The current laws put people’s health and wellbeing first.

“The fear-mongering around this legislation, which is working quite effectively, is bizarre.”