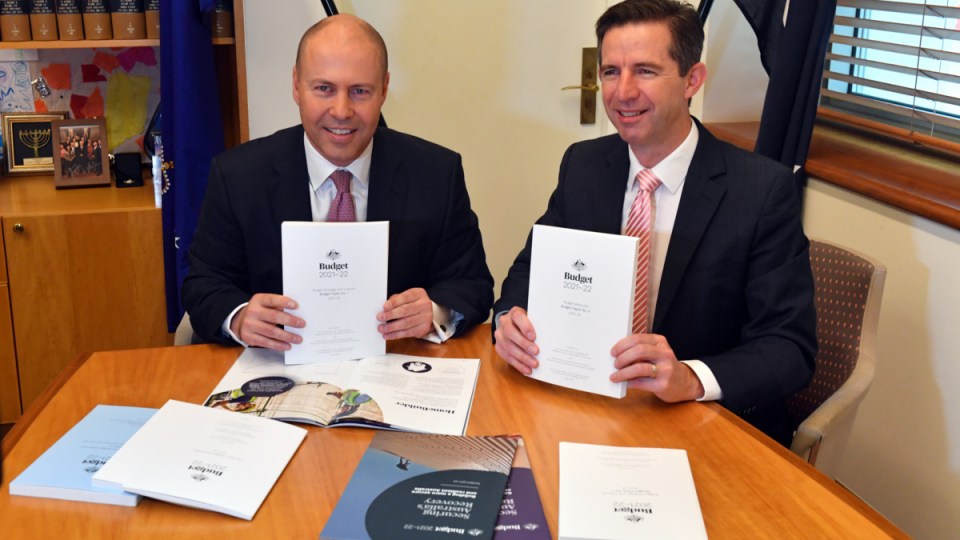 Josh Frydenberg’s second ‘pandemic budget’ is full of “political fixes”, critics claim, with disappointment in Parliament House at a plan that is just “tinkering around the edges”.

The Treasurer announced billions in new funding for aged care, child care, mental health and the continuation of tax offsets, with veteran political observers commenting that the Coalition’s budget looks potentially more like a Labor plan – big on essential services and expanding government spending, ahead of a federal election due within the year.

It’s an analysis the Opposition also pounced on, claiming the government’s budget was written with one eye on the next poll.

“It is a shameless political fix, rather than the genuine reform needed to make Australia’s economy stronger, broader and more sustainable,” Labor’s shadow treasurer Jim Chalmers said on Tuesday night.

Speaking to the ABC, Dr Chalmers slammed the budget as the government trying to “cobble together these political fixes to try and get them through an election before they revert to type”.

ABC’s 7.30 host Leigh Sales told Dr Chalmers it was “a budget that one could imagine Labor delivering”.

“The government has gone out of its way to deal with areas of political vulnerability, areas Labor had been talking about for a while,” Speers said.

Dr Chalmers protested that “there are still important differences between Liberal and Labor when it comes to the budget,” claiming the opposition would do more on clean energy, social housing and secure work.

In another reversal of political ideologies, as the Coalition government backed big spending, Dr Chalmers said he wanted to start talking about “budget repair”.

“At some future point a government of either political persuasion will need to think about budget repair and absent from the budget today is any sense of how this record trillion dollars in debt – many multiples of what the government inherited from Labor – there’s no sense of a plan about how the government will get that back under control,” he claimed.

“There are three ways to repair the budget – growth, spending and revenue – some combination of that. Governments of either persuasion will have to contemplate that at some point.”

It is a shameless political fix, rather than the genuine reform needed to make Australia’s economy stronger, broader and more sustainable. #Budget2021 #auspol

Rachel Siewert, the Greens spokesperson on health, said the government should have done more on aged care and mental health.

“This budget is a surplus of scatter gun approaches and tinkering around the edges,” she claimed.

Senator Siewert said the government should have poured more money into aged care, and that mental health care should have been made more affordable.

Greens leader Adam Bandt claimed it was “champagne for the billionaires and real pain for everyone else”.

“I’m disappointed, however, that there is no solution to opening the borders sooner,” she said.

“This would have been a serious investment in the development of a national federal quarantine system and would have demonstrated a commitment to resuming trade, investment and tourism.”

Australians will be better off in the short-term following tonight’s Budget, but the long-term challenges of closed borders due to COVID-19, climate change impacts and investment into adaptation and climate resilience have been forgotten. My assessment:https://t.co/7AIyUWI1Li pic.twitter.com/z7kxbK9tUh

Independent senator Rex Patrick claimed some social measures in the budget “are foreign to the Liberal-National party’s DNA”.

“They have been dragged into many of the measures by crisis and controversy,” he said.

“The government seems content with just exporting rocks and not making Australia make again,” he claimed.

Business captains and union leaders also gave mixed reviews to the budget, with serious criticisms from industry on the plan to keep borders shut until mid-2022.

Margy Osmond, from the Tourism and Transport Forum, claimed the long-term border closures would see Australia become “the lost kingdom”, fearing the impact on tourism operators.

She claimed the budget had left her industry “high and dry”.

Innes Willox, chief executive of the Australian Industry Group, said he supported much of the budget and backed its positive effect on business.

However, he too slammed the border closures, saying Australia would “run the risk of being left behind” as other nations slowly open up for tourism and visitors.

“We don’t want to be stuck in the gilded cage,” he said.

Michele O’Neil, president of the Australian Council of Trade Unions, and Carolyn Smith of the United Workers Union both called for extra money for aged care, saying the $17.7 billion investment fell short of what was needed.

“We’re seeing a multibillion-dollar investment in the next four years, and the objective is very clear from what the government has been saying … and that is there is a need to fund mental health in Australia, to get better outcomes,” he said.

Disease concern for survivors of Afghanistan earthquake
Steve Smith confirmed as starter for first Test against Sri Lanka
Matildas will be keen to forget 7-0 drubbing by Spain
Upcoming stats will reveal where and how hard rates are hitting economy
Victorian MPs pocket a tidy 2.75 per cent pay raise
Reserve Bank review isn’t a ‘get the governor’ exercise: Jim Chalmers
Controversial Liberal MP Andrew Laming denies being a troll
Today's Stories