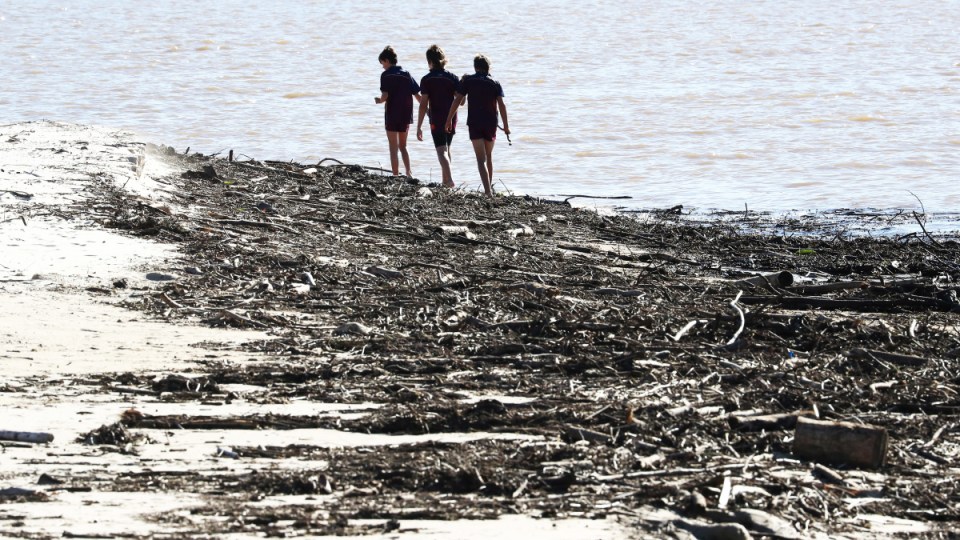 Many coastal towns have been spared the worst of the expected rain. Photo: AAP

A dangerous low that threatened severe flooding across south-east Queensland has eased, diminishing the risk for local communities from the Gold Coast to the Sunshine Coast.

Queensland’s bureau of meteorology issued an update on Monday at 11am to say widespread heavy rainfall was no longer expected as the trough remained far enough offshore.

However, “localised heavy falls in showers and thunderstorms still possible into the afternoon and evening”, it read.

Earlier, the Bureau of Meteorology issued a severe weather warning late on Sunday afternoon for damaging winds, heavy rainfall and dangerous surf across a large swathe of southeast Queensland.

“It should start to abate as we move into (Monday night) and Tuesday.”

A flood watch remains in force for coastal catchments between St Lawrence and the Queensland-New South Wales border, including the Darling Downs.

“This is mainly due to the fact we have a lot of saturated catchments around South-East Queensland, so although the heavy rain risk is starting to diminish, a lot of catchments are saturated and will respond quickly to any further rainfall over the next 24 hours.

“We’re still going to have quite a lot of shower activity around moving into Tuesday, but as the low-pressure system moves away, both systems should start to abate and so should the flood risk.”

With thousands of people expected to hit the roads for the end of the Easter break, deputy Premier Steven Miles urged drivers to take care.

“We expect the weather situation to continue to ease, but it will continue to be wet, particularly along the south-east coast,” Mr Miles said.

“Today is one of the busiest days for people travelling from the Gold Coast and Sunshine Coast back to Brisbane. Our main message now is for people to please, please drive safe.”

Meanwhile, residents in Western Australia’s far north have been warned a tropical cyclone is intensifying and moving south toward them.

Tropical Cyclone Seroja formed early on Monday morning about 590 kilometres northwest of Kalumburu in the Kimberley region, the Bureau of Meteorology says.

The category one system is tracking southwest and is expected to continue intensifying in the coming days as it slowly skirts along the coast.

There is the risk the cyclone will approach the west Pilbara on Thursday, BOM said in a statement.

However, it’s not expected to impact communities in the next 48 hours.

The warning comes as residents in northwest WA were urged to stay up to date with weather forecasts.

As the final month of cyclone season begins, a late burst of tropical activity is brewing, a spokesman said.

Visitors to the region should also be prepared to change their plans if the threat of a cyclone impact increases.

TC Seroja or lotus flower was so named because it formed in Indonesian waters.

If it formed in Australian waters it would have been named Odette, the next on BOM’s list.

Cyclones that form late in the season have a greater chance of becoming severe, BOM said.

That’s because they tend to form further in the north, giving them more time to develop.

Australia’s fourth strongest documented cyclone, Orson, slammed into the WA coast at Dampier in the Pilbara region in April 1989.

The category five system caused about US$16 million worth of damage with 70 per cent of homes in nearby Pannawonica affected.

Cyclone Olivia set a world record for wind speed in April 1996 with gusts of 408 km/hr recorded at Barrow Island, 50 kilometres off the Pilbara coast.

It reached category four before accelerating southeast towards WA’s goldfields region and Eucla on the Great Australian Bight in the state’s south.