2020 weather: The year that started in fire and ended in floods.

Despite La Niña bringing the rain and cool change,  Australia endured the fourth-hottest year in history in 2020, raising the alarm for urgent action on climate change.

The year was made up of deadly extremes – from catastrophic bushfires to floods, and one of the wettest Decembers on record.

Throughout it, the maximum and minimum temperatures were above average for all states and the Northern Territory.

With annual average temperatures edging closer to 1.5 degrees Celsius above pre-industrial levels, the nation’s averaged mean temperature for the year was 1.15 degrees above the 1961 to 1990 average.

The trend of human-caused climate change is obvious – eight of the 10 hottest years on record for Australia have now occurred since 2013. 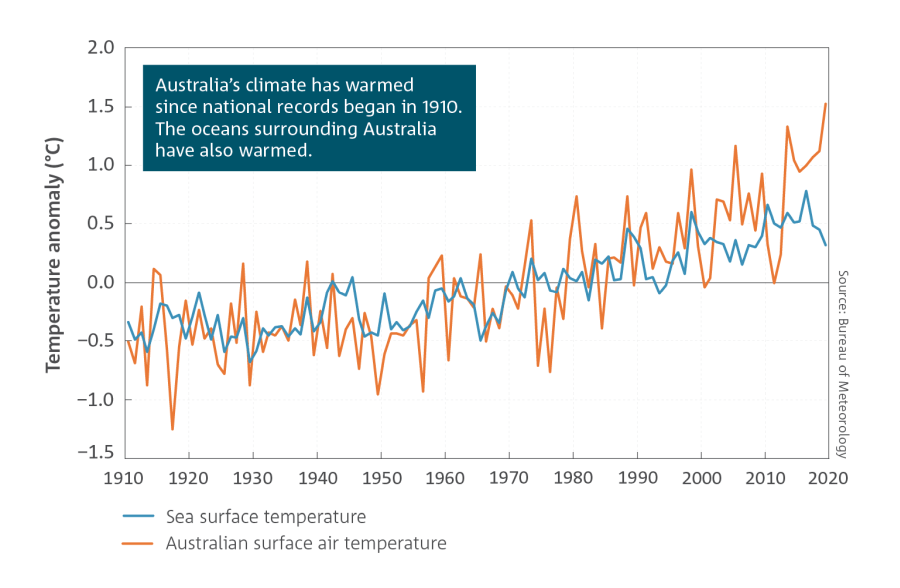 The World Meteorological Organisation is yet to release December’s figures but 2020 is on track to be the warmest year on record worldwide.

Head of Operational Climate Services at the Bureau of Meteorology Andrew Watkins said it was “unusual” to see such a warm year during a La Niña event, but it was important to note it started later than normal.

“It did start late, so the cooling influence didn’t kick in until September/October,” he said.

“The year as a whole really saw a lot of the dry and hot conditions which had a big influence on annual terms.”

While the La Niña may have taken some of the heat out of the last part of the year, the overall trend was increasingly up, he said.

“The reality is we have a number of climate drivers, on top of that long term warming trend over the past century,” he said.

“We’re seeing warmer La Niña years now globally, than we saw in the past.”

Despite the heavy rainfall throughout December, parts of the country are still in drought and water reserves are well below where they should be, the BOM warned.

In the Murray-Darling Basin, southern water storages saw significant increases during 2020 – rising from 36.8 per cent in March to 68.8 per cent at the end of November.

In the northern basin water storage levels also increased from a record low of 5.4 per cent to about 25 per cent at the end of December.

Senior climatologist at the Bureau of Meteorology Lynette Bettio said  water storages were “still low” around the country but the BOM was hopeful for an increase over the rest of the La Niña period – which is expected to peter out after autumn.

“Water storage is under 30 per cent, so we are not fully out of the woods,” Ms Bettio said.

The La Niña effect is expected to end by the end of autumn, but could possibly redevelop over summer again, she said.

“All the models are suggesting we’ll swing away from La Niña to something more natural for the first half of the year,” Ms Bettio said.

“We do expect there to be above-average rainfall.”

The wet weather won’t stay long, with a report the BOM released in December showing the country is “rapidly” moving towards a hotter, drier climate.

It comes as a new study into last year’s bushfires from the Australian National University said the disaster should act as “wake-up call” demonstrating the extreme effects of climate change in Australia.

The study concluded that the best approach to limiting the risk of further disasters would be to improve fire mitigation strategies while also urgently pursuing actions that would slow down climate change.

The authors warned fire disasters like that of our Black Summer are made worse by human-caused climate change in multiple ways and bushfires will become even more severe in south-east Australia in coming years.

Lead author Professor Nerilie Abram, from ANU, said while scientists have been warning climate change would increase Australia’s fire risk for decades, last summer’s event was a clear sign of what was to come.

“Our new work highlights the strong evidence that south-east Australia’s climate has shifted, and that this type of fire weather is becoming more frequent, prolonged and severe,” Professor Abram said.

In the study, scientists pointed out that predictions made more than 10 years ago – that an increase in climate-driven fire risk would be directly observable by 2020 – appeared to have come true.

Professor Abram said when we look to the future, we can see a rapidly increasing risk of catastrophic bushfires “beyond anything we have experienced in the past”.

We need to act fast to reduce greenhouse gases, she said.

We can’t look at climate change as something in our future or something that we can simply adapt to. It’s here now, and we need to make choices now that put us on a lower risk pathway.’’
– Professor Nerilie Abram, ANU