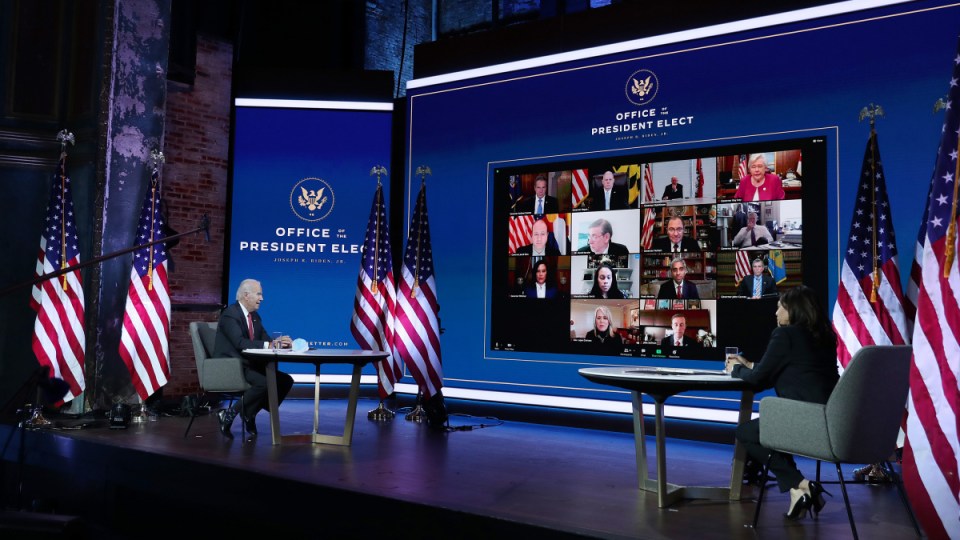 US President-elect Joe Biden will announce the first of his cabinet appointments and is planning for a scaled-down inauguration due to the coronavirus pandemic, aides say, as he lays the foundation for his new administration despite President Donald Trump’s refusal to concede.

Since Mr Biden, a Democrat, was declared the winner of the November 3 election almost three weeks ago, the Republican president has launched a barrage of lawsuits and mounted a pressure campaign to prevent state officials certifying their vote totals.

“I hope that the administrator of the GSA will do her job,” Mr Klain said on Sunday local time, referring to GSA chief Emily Murphy.

Mr Biden is due to take office on January 20.

“A record number of Americans rejected the Trump presidency and since then Donald Trump’s been rejecting democracy,” Mr Klain told ABC’s This Week program.

Mr Biden, working in his home state of Delaware, has announced a series of selections for White House posts. Mr Klain said “you’re going to see the first cabinet picks this Tuesday”.

Media has reported Mr Biden could name his nominee for secretary of state or treasury secretary this week.

Mr Klain said there would be “scaled-down versions of the existing traditions” for Mr Biden’s inauguration. COVID-19 cases and deaths are surging in many parts of the country amid a pandemic that has killed about 257,000 Americans.

According to the latest Johns Hopkins University data, 12.2 million Americans have contracted the coronavirus since the beginning of the pandemic.

“We know people want to celebrate,” Mr Klain said. “We just want to try to find a way to do it as safely as possible.”

Critics of Mr Trump accuse him of trying to undermine faith in the American electoral system and delegitimise Mr Biden’s victory by promoting false claims of widespread voter fraud.

“Fight hard Republicans,” Mr Trump wrote on Twitter on Sunday morning before playing golf in Virginia for a second day in a row.

Attempts to thwart certification of vote tallies have failed in courts in Pennsylvania, Georgia, Michigan and Arizona. US District Judge Matthew Brann, in dismissing the Pennsylvania lawsuit on Saturday, compared the Trump team’s arguments claiming voter fraud to a “Frankenstein’s Monster” of meritless legal arguments and speculative accusations.

Mr Trump’s campaign said it was appealing Judge Brann’s decision. Pennsylvania is expected to certify its election results on Monday.

Mr Trump’s campaign has also filed a petition for another recount in Georgia.

Some of Mr Trump’s fellow Republicans are breaking ranks though many have not.

Former New Jersey governor Chris Christie, who has served as a Trump adviser, told ABC the president’s legal team was a “national embarrassment”.

“We’re beginning to look like a banana republic,” Maryland’s Republican Governor Larry Hogan told CNN, criticising the refusal of many in his own party to acknowledge Mr Trump’s defeat.