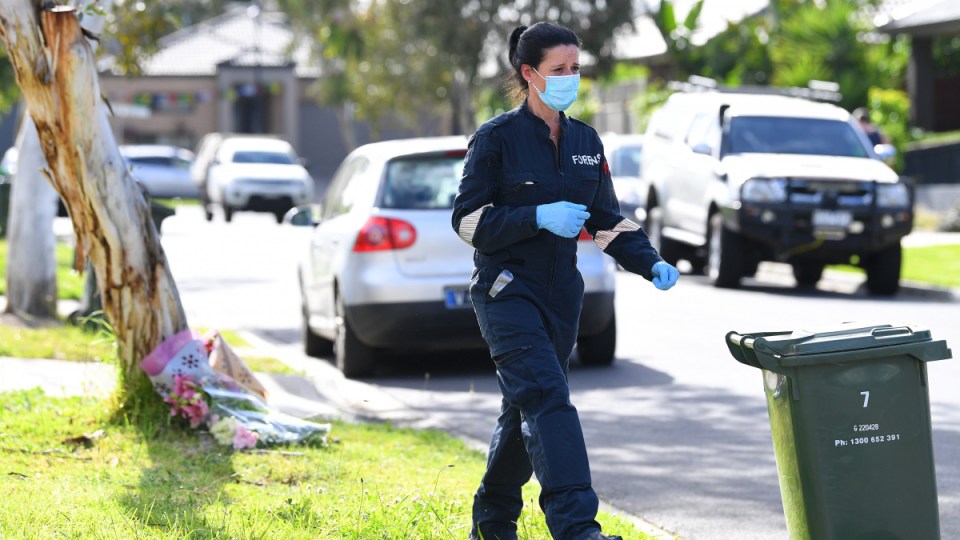 A forensic investigator outside the Mernda property where a woman’s body was discovered on Monday. Photo: AAP

The grief-stricken family of slain Melbourne woman Celeste Manno claims the system failed to protect her after her alleged murder at the hands of an infatuated former co-worker.

A 35-year-old man, believed to be known to her, was arrested and taken to hospital where he remains under police guard.

Outside the Mernda home on Tuesday, Ms Manno’s devastated family said the alleged killer previously worked at the same Mill Park call centre she did.

“One of her team members got fired and she wasn’t close with him at all,” brother Alessandro told reporters.

“But just to give him some support she just walked him out the door and ever since that day he’s just been obsessed with her.”

Alessandro, who was spending his first night away from the home in years, said they had even resorted to filing restraining orders as the online harassment mounted.

Older brother Jayden said her death should never have happened.

“Such a senseless, unfathomable, evil act that should never happen to our family, not to anyone’s family.”

Her father Tony feels the system let his daughter down.

“It doesn’t bring her back but it’s got to be changed.

“What’s it going to take for the government to listen. It could be yours (daughter). It’s not right. It’s got to stop.”

As Ms Manno’s tearful boyfriend was consoled by fellow mourners in the street, Jayden described the university graduate as the “most intelligent one of all of us”.

“She was loved by everybody,” he said.

“There wasn’t a soul on this Earth who could ever say a bad thing. She touched everyone.”

Alessandro was still expecting his sister to drive around the corner after knocking off for the day.

“I’ve never been more than about two days without her,” he said.

“I feel like she’s going to come home from work any minute.”