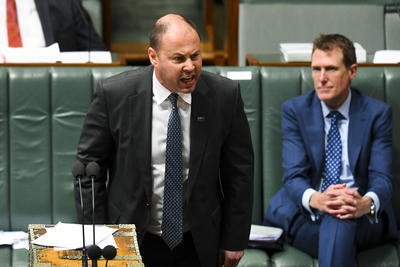 Josh Frydenberg has let rip with a scorching criticism of Daniel Andrews’ coronavirus response, during a federal Parliament motion praising Victorians for their resilience through one of the world’s toughest lockdowns.

“Six months lost from schooling. Six months that they will never, ever get back,” the federal Treasurer said of his young children.

“I am so happy to join with all those in this place in celebrating the fact that the numbers have come down, but do not pretend there has not been a price.”

Mr Frydenberg, the most senior Victorian federal minister, has been among the loudest critics of the Victorian Premier’s virus response.

On Tuesday, he claimed that he knew personally of people who had taken their lives or self-harmed due to lockdown-associated job losses.

On Tuesday, after Victoria recorded its second-straight day of zero new COVID cases – a milestone not achieved since March – the federal Parliament considered a motion to note the effort of Victorians.

The sacrifices made by Victorians have kept every Australian safe.

From a grateful nation, we say thank you.

Here's the motion I just moved in Federal Parliament. pic.twitter.com/sp4O2f4uWu

The motion from the Opposition Leader called on MPs to “commend the people of Victoria for the sacrifices they have made” and congratulate them “for their achievement in overcoming the second wave”.

“For Victorians this time has been a time like no other in Australia have really had to endure,” Prime Minister Scott Morrison said, in supporting the motion.

“It is right for our Parliament to congratulate and to thank Victorians for the way that they have conducted themselves over these many difficult months.”

The PM said he wanted to see state premiers continue to open their societies and their borders, noting again his belief that lockdowns “are not demonstration or evidence of success”.

“As we look to the future, we cannot look to a future of lockdown as a way of managing this virus,” Mr Morrison said.

“What we must do is have the testing and tracing and the isolation and quarantine options.”

Richard Marles, the deputy Labor leader and the opposition’s most senior Victorian MP, used his speech in support of the motion to note how well the state had done in extinguishing its outbreak, compared to other areas around the world.

“On the 30th of July, just 12 weeks ago, Victoria recorded 723 new cases of coronavirus. On that same day in Great Britain there were 846 new cases,” the Member for Corio said.

Mr Marles said such a comparison showed “the incredible achievement of bringing under control” the virus.

“Around the world, there is hardly a precedent for it. And the credit for that first and foremost goes to the people of Victoria,” he said.

But it was Mr Frydenberg’s unexpected spray that grabbed the most attention, as he turned the spotlight around to highlight the negative impacts of the lockdown.

The Treasurer didn’t mention Mr Andrews by name, but the target of the speech was unmistakable.

“The pain, the cost, the loss of Victorian people. It should never have come to this.

The Treasurer spoke of children who had lost education and social time, and the 817 Victorians who have died in the pandemic.

The Victorian people have been magnificent.

The sacrifice, dedication & hard-work of 6m+ Victorians in driving down case numbers is their victory.

The Govt will continue to support Victorians as we get to the other side.

“A friend of mine said that a friend of his had taken his own life because he lost his job in Victoria.

“In the same message, he said others had started to self harm. These are not unique cases. These are across the state. This is the price that has been paid during the lockdown.

“I am so happy to join with all those in this place in celebrating the fact that the numbers have come down, but do not pretend there has not been a price. The price has been immense.”

What a nasty speech by Josh Frydenberg.

Mr Albanese’s original motion was passed by the House of Representatives.