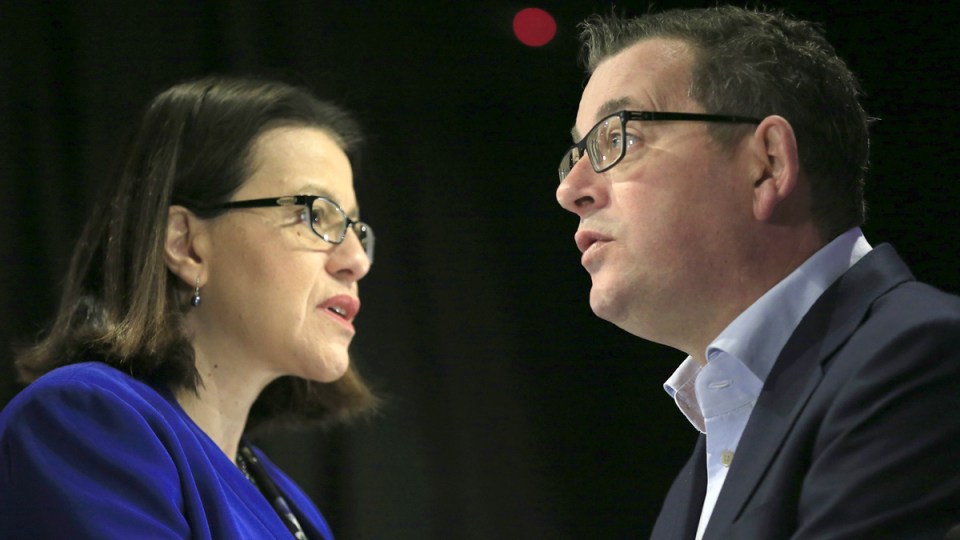 Former Victorian health minister Jenny Mikakos was among the first to criticise the Andrews government for the delay. Photo: AAP

Recently resigned health minister Jenny Mikakos is the latest to pour scorn on Daniel Andrews’ cautious reopening of Victoria, with the Premier under mounting pressure to announce the easing of lockdowns.

Scott Morrison shared his “profound disappointment” over the plan, while Victorian Liberal leader Michael O’Brien accused the Premier of being “incompetent”.

“Daniel Andrews promised Victorians a significant easing of restrictions to be announced today, and he’s lied to us yet again,” he claimed.

Mr Andrews had flagged for a week he hoped to lock in plans on Sunday for a mid-week relaxation of rules, but yesterday said a growing cluster in Melbourne’s north had forced a “pause” in the timeline.

“It is just not safe at this stage to make these announcements today,” a clearly disappointed Premier said.

Just seven new cases were logged on Sunday, and Victoria’s 14-day rolling average of new COVID cases fell to 4.6 – below the mark of five, a trigger to move to the reopening roadmap’s third step.

However, six of Sunday’s seven cases are associated with a cluster linked to schools in Melbourne’s north, and some 1000 test results from the area are still outstanding.

Mr Andrews said he wouldn’t further wind back restrictions until those tests were returned, but claimed it was “not a setback”.

“This is not anything other than a cautious pause, to wait to get that important information, to get the results of those tests,” he said.

Mr Andrews stressed it might only be a small delay, saying things may only be postponed by 24 hours, and the original timetable of a wider November 1 reopening was still on track.

Late on Sunday, Victoria’s health department said 1135 tests linked to the northern cluster had come back negative. Another 1400 taken on Sunday were still being checked.

But despite the Premier downplaying the significance of Sunday’s announcement, the barbs came quickly for another delay – however slight – in Victoria’s reopening.

Of most interest was Ms Mikakos, who quit Mr Andrews’ ministry last month after he claimed she had responsibility for the botched hotel quarantine system.

The former health minister tweeted while the Premier was at the podium for his press conference, claiming “it’s paralysis in decision-making”.

Vic has met the under 5 threshold which some thought was unachievable. This was a very cautious target. 6/7 of new cases are related to a known outbreak so the risk is manageable. The set reopening is gradual & safe so any delay is unnecessary. It’s paralysis in decision-making.

“Any delay is unnecessary,” she tweeted.

Melbourne Lord Mayor Sally Capp, who has repeatedly clashed with the Premier over the reopening timetable, took aim at the decision in blistering tweets.

She claimed the government was “changing the goal posts”, and that business was “bitterly disappointed”.

Changing the goal posts is confidence shattering for businesses that are struggling to hold on.

Every day is critical to keeping Melburnians in jobs and saving businesses.

Business groups also lined up to dole out criticism.

“We can no longer say there is no alternative, when we can see successful alternative paths to managing these outbreaks within NSW. We must start taking care of both lives and livelihoods or the broader health and business consequences will be catastrophic,” he said.

Mr Zahra pleaded for businesses to be able to return to work as soon as possible, to undertake preparation work in anticipation of public reopening in coming days.

“We need to stick to a firm reopening date to give the retail sector time to prepare their staff and their customers,” he said.

Before Mr Andrews’ press conference, federal Health Minister Greg Hunt claimed not opening wider could only be blamed on Victoria not trusting its contact-tracing system. Mr Andrews denied that assessment.

Mr Hunt, in a subsequent joint statement with Prime Minister Morrison and Treasurer Josh Frydenberg, said “at some point, you have to move forward”.

“Victoria’s public health systems are either up to the task of dealing with future outbreaks or they are not,” the federal trio said.

“The decision to keep businesses closed suggests that there is still not sufficient confidence within the government that their systems can support reopening.”

“This is a profound disappointment.”

“In any other state this outbreak would be handled quickly so the rest of the state could continue living,” he claimed.

“Victorians deserve so much better than being lied to, constantly having the goalposts moved and constantly being told just wait a little bit longer.”

Chief health officer Brett Sutton said critics are “not in the tent” on the detailed health advice that state officials are relying on to make decisions.

Mr Andrews has said he hopes to make further announcements early this week.