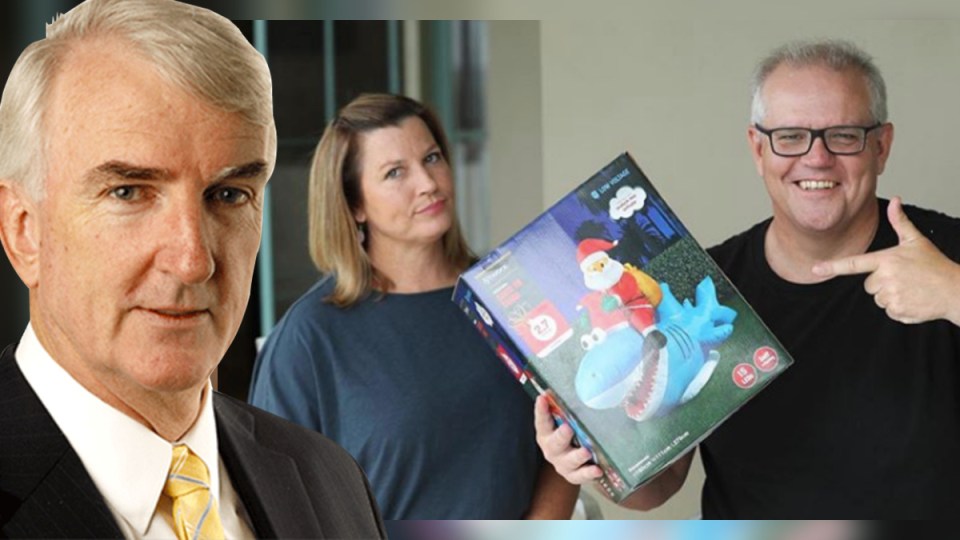 The PM has again distracted media from the issues at hand, Michael Pascoe reports.

If only Bunnings’ Christmas shark novelty light was made by Cartier, the circle of the last week’s media management circus would be complete.

Alas, the latest “Daggy Dad” image prop released by Bunnings’ top influencer, Scott Morrison, has nowt to do with French luxury goods – yet the 2.7-metre inflatable shark and $20,000 worth of Cartier watches have plenty in common.

Both played the role of a red herring/dead cat/Look-over-there-a-puppy! to distract attention from a poor week for a government that plays the news cycle every day to win.

The Prime Minister’s Instagram post of giving himself an early Christmas of the Bunnings shark he had previously promoted had the desired effect – media attention on Scott Morrison that wasn’t about government failures, especially those involving whiffs of corruption and his reluctance to honour his pledge to introduce a national integrity commission.

(And please, oh please, if we ever do get a federal version of the ICAC, may it be called the National Integrity Commission as a small gift to headline writers.)

“He shared a hilarious picture of himself on Saturday smiling widely and pointing at the box holding the decoration, as his wife Jenny looked on – less than impressed,” gushed the Daily Mail.

“Scott Morrison has gotten himself a Christmas gift that left his followers in stitches and his wife slightly less amused,” dutifully reported News.com.au.

Made for online satire, cue anyone with Photoshop.

A man with a plan #auspol pic.twitter.com/rAO5ZqIAY2

And plenty we can’t repeat while the children are watching.

But that’s all good, mate, for perpetuating the Daggy Dad image, playing to the base, “having a laugh” and – most importantly – providing a distraction in the unlikely event that Labor had anything to say over the grand finals weekend.

For a Prime Minister under attack over the $27 million that disappeared into the Leppington Triangle and being caught NICerless (sorry, couldn’t resist) two years after promising one, Australia Post CEO Christine Holgate provided a very convenient head to kick when Senate estimates first disclosed she had rewarded four executives for Cartier watches worth a total of $12,000 – an amount subsequently corrected to nearly $20,000.

It was the knee-jerk populist response you would expect from any successful radio shock jock – outrageous that $3000 watches should be showered on posties when the mail is running slower than ever. (Subsequently, try watches worth $7K or so.)

But once the headline passed, if anyone looked a step further, it was an own goal.

If there is a problem with Australia Post’s management, it is the government’s fault as it well and truly stacked the board with Liberal Party mates, including former Queensland Liberal National Party president Bruce McIver, former Liberal Senator and Minister for Veterans’ Affairs Michael Ronaldson, former federal and state Liberal Party director Tony Nutt, and Deidre Willmott, former chief of staff for WA Liberal Premier Colin Barnett.

It’s only my opinion, but if the Australia Post board had any quality, any principles, it would have either stuck up for its CEO and told Mr Morrison to take a cold shower, or resigned.

Instead, all the chairman managed was to refuse to front for Senate estimates and ordered his deputy to do likewise.

Both sides of politics have a habit of finding jobs for mates when in government, but the Coalition has elevated the jobs-for-the-boys-and-girls to an unprecedented level since 2013, routinely cleaning out Labor-appointees in the process whether or not they had Labor affiliation.

People mindful of their reputation might think twice now about accepting a federal government appointment to a board lest it look like they are merely political hacks.

And the watches gifts themselves are a nonsense. What caught the populist eye about them was that nearly all Australians would regard spending $3000 on a watch as rather embarrassingly extravagant.

Never mind the bonus, there’s something just a little obscene about such conspicuous consumption. And that’s without mentioning the $30,000 watch Ms Holgate herself flashes. Oops, I mentioned it.

If each of the four was given a $10,000 salary bonus instead, it would have cost twice as much but nobody would have blinked.

Despite the Prime Minister’s current histrionics, those with experience of large corporation gifts, rewards and bonuses would think nothing of it – it’s par for the course.

It’s a little odd that a government that pledges alliegence to the ethics of private enterprise, of “incentivation”, of running down the public service, suddenly wants government-owned corporations to act like APS bureaucracies instead.

But knee-jerk reactions for a bit of look-over-there distraction can twist that way.

The funny thing is, I’m not sure most people are silly enough to buy it. On Friday morning I was invited to have a chat on ABC Brisbane morning radio about those obscene Australia Post watches.

As they say in the cliché manual, “the switchboard lit up”. I was somewhat surprised to hear the clear majority of callers classify the Prime Minister’s performance as a stunt, as a distraction from the much bigger questions of probity and structural corruption hanging over the government.

The $100 million sports rorts scandal. The $2.5 billion Community Development Grant corruption. Running scared of being NICed. (Yes, I did it again.) Et al.

And then on Friday the Australian Securities and Investments Commission bombshell hit – the chairman and deputy chairman stepping down while their much-richer-than-a-Cartier-watch expenses claims were further examined.

These are direct government appointments to a governance watchdog – not a government-owned capitalist enterprise.

Those with a keen eye might notice that Scott Morrison’s shark is self-inflating. And the photograph wasn’t a selfie.

Michael Pascoe: Jumping the shark on the watches