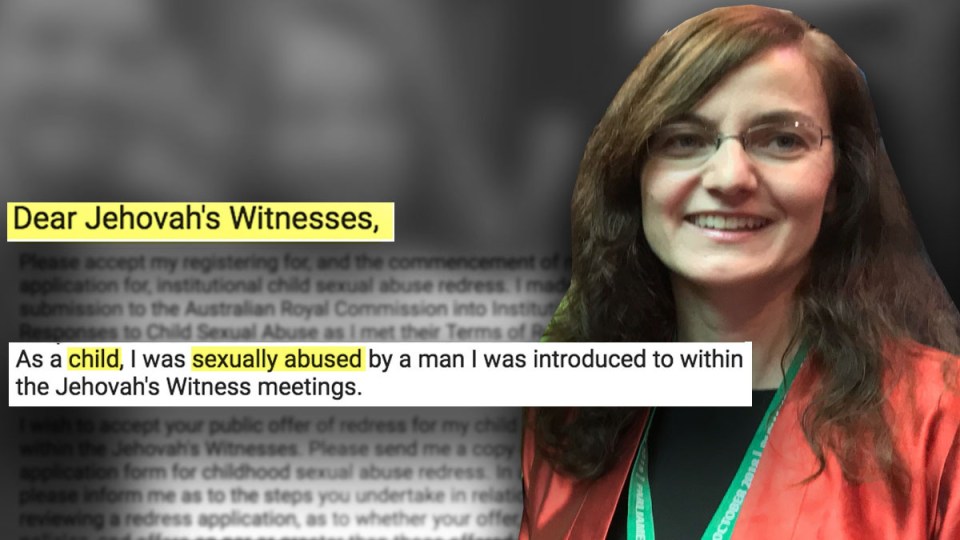 Alleged victims say their claims are being ignored by the church.

The Jehovah’s Witnesses refused to sign up to the national redress scheme, opting instead to handle historic sex abuse claims in-house – but alleged victims say they are still being ignored by the church.

Thursday marks the two-year anniversary since the federal government apologised to the survivors of institutional childhood sexual abuse.

But the scheme is coming under increasing scrutiny.

Although the deadline for institutions to sign up has been extended until December, the Jehovah’s Witnesses is the only national organisation to declare they will not be joining.

On Wednesday, the church referred The New Daily to a previous response in June in which it stated it would ‘respond directly to individual claims for redress in a caring, fair, and principled manner, taking into consideration the unique circumstances of each claim’.

But at least one survivor of childhood abuse says her email was left unanswered.

Lara Kaput emailed the church on September 18, asking for “a copy of your application form for childhood sexual abuse redress.”

“I made a submission to the Australian Royal Commission into Institutional Responses to Child Sexual Abuse as I met their Terms of Reference,” the email read.

Ms Kaput says she has not received a response from the church.

“We spent all this money on the royal commission, it took such a long time, we got the results, now there’s nothing,” she said.

The advocate for abuse victims has not publicly shared her story before.

Ms Kaput says she was 13-years-old when she was groomed and assaulted by an adult member of the Jehovah’s Witnesses.

“He was a family friend, he was someone I looked up to,” she said.

She did not open up about the abuse until she was writing her submission for the Royal Commission into Institutional Responses to Child Sexual Abuse.

“I was aged 44. The first time my parents found they were CC’d into an email. It had taken 31 years to talk about it.”

She said she knew other survivors who were too scared to approach the church with their claims.

“The Jehovah’s Witness survivors are waiting in the wings, they’re terrified, they’re broken, they’re hoping the government will see them this time and do something about it.”

So far only 8000 Australians have applied for redress compensation, compared with the almost 60,000 it is estimated that are eligible.

Of those, 4567 offers of redress have been made.

On Tuesday, Labor shadow families minister Linda Burney said she will seek to amend a number of technical elements of the scheme.

Her proposal includes fast-tracking the time it takes to process applicants and to cut Commonwealth funding and charitable deductions eligibility to institutions that do not sign up.

But a government spokesperson says Labor’s proposed amendment would break the Intergovernmental Agreement and risk states walking away from the scheme altogether.

“The Government is also investigating how to revoke tax concessions, however, taxation law is complex and we must ensure any changes do not have inadvertent consequences for institutions which do the right thing,” the spokesperson said.

“The Government will consider the amendment put forward on this matter.”

A generation of survivors

One in six (1.5 million) women and one in nine men (992,000) have experienced physical and/or sexual abuse before turning 15, according to data compiled by the Australian Institute of Health and Welfare.

After a decade of being subjected to physical, sexual and psychological abuse at the hands of her foster parents, Christine Foggo, at age 12, finally worked up the courage to tell a welfare officer.

But it was all for nothing.

It would be years later before she would speak up again, and it was only after the abuse had become unbearable.

Christine was removed from their care and placed in a state-run children’s home. There she was sexually assaulted by a male doctor assigned to medically examine her.

Eventually, Christine’s friend’s mum took her in. She suffered at least three other separate instances of sexual abuse in the following years.

Past experience of telling authority figures about the abuse she was suffering had proven to her it was best to just keep quiet.

So much so that throughout her childhood, she avoided looking people in the eyes and kept her head down to hide her pain.

“I nearly didn’t survive,” she told The New Daily.

Christine received some financial compensation but it was only for the sexual abuse she endured while in state care and ignored more than a decade worth of abuse from her foster parents.

In her victim impact statement, Christine wrote: “I feel that I could have been so much more in life and I am angry and sad that I have not been able to reach my true potential.

“The Department had every opportunity to help me as a child. If the Department had actually placed me with people who cared for my wellbeing, who knows how different my life could have been.”

A major issue is that survivors who struggle to build and maintain relationships often don’t realise that is a result of their abuse, said Melissa Holmes, a case manager at Stepping Out.

Rather they just feel they’re unlucky, and as a consequence, they don’t seek help and aren’t able to “have the best life that they could have”, Ms Holmes said.

“The victim feels the shame. They take it on and they carry it through life, like a very heavy suitcase that affects all of their life choices.”

Because they’re usually sexually assaulted by someone who is meant to be in charge of keeping them safe, those subjected to the abuse – women in particular – tend to develop an attachment disorder, Ms Holmes said.

“They never feel safe, they can never trust anybody. It’s not just intimate partnerships, it’s also relationships with their children, or with authority or with bosses, teachers,” she said.

That is the primary emotional outcome of childhood sexual abuse, she said.

Alleged Jehovah’s Witnesses abuse victims say they are being ignored