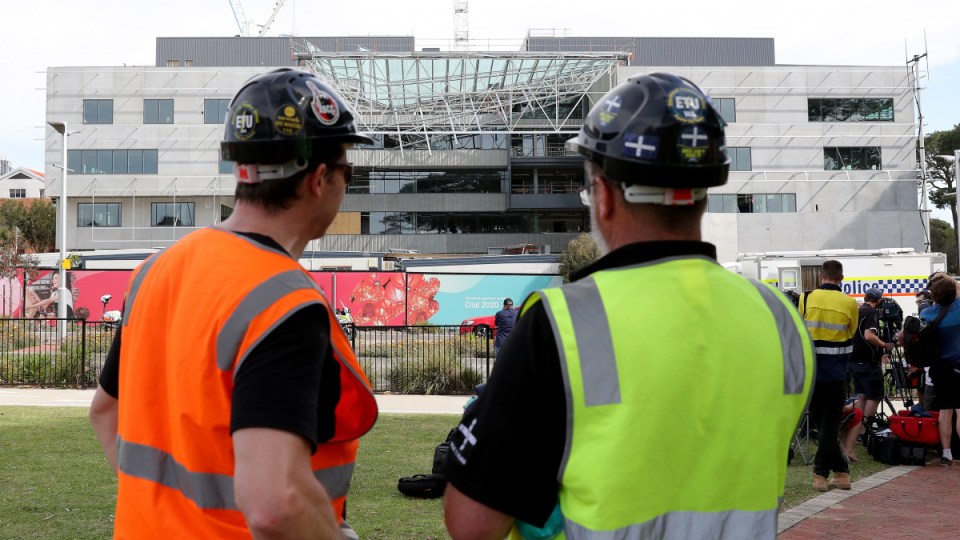 Construction workers examine the scene of a collapsed building at Curtin University in Perth on Tuesday. Photo: AAP

An apprentice has died and another worker has been seriously injured after a building under construction partially collapsed at Perth’s Curtin University.

The 23-year-old man and another worker fell more than 20 metres when a metal structure supporting the five-storey building’s glass roof collapsed on Tuesday afternoon.

The second man was seriously injured and is understood to be undergoing surgery at Royal Perth Hospital.

A third worker inside the building at the university’s Bentley campus was also injured after falling about 10 metres.

His condition is unknown but he was conscious and able to speak.

There has been an accident on our Perth campus this afternoon. Our thoughts are with all impacted. pic.twitter.com/DwlwHvi1F2

Both injured men are in their 20s.

Police and emergency crews are working to make the site safe so they can retrieve the body of the worker, whose family has been notified.

WA Police Commander Mike Bell told an afternoon media conference that authorities are yet to determine what caused the roof to suddenly give way.

“A lot of the workers have stayed behind and obviously they’ll be spoken to in due course to determine exactly what happened,” he told reporters.

“It’ll be up to the engineer to declare it safe, at which point we can then go in and remove the body of the deceased and start our investigation.”

Police and WorkSafe WA are investigating the incident and a file will be prepared for the coroner.

A construction vehicle was also crushed by the collapsing debris.

Dozens of workers gathered outside the site after the incident.

He said there could have been many more deaths and injuries had it happened just five minutes earlier.

CFMEU state secretary Mick Buchan said he had been made aware after the incident of there being issues with “deflection in the structural steel”.

“Those issues were addressed by structural engineers … (but) I understand that there were some concerns,” he said.

Mr Buchan said the union had not previously been aware of any concerns about the site, describing the incident as tragic.

“It’s 2020. These events should not occur in the building and construction industry,” he said.

“We’re seeing all around Australia, incidents similar to this … poor procurement, cheap tendering, poor design or under-design on construction projects.”

The building is believed to be the School of Design and the Built Environment.

It was part of a project called The Exchange, which includes a boutique hotel with teaching spaces, student accommodation and shops near Curtin University’s medical school.

Terrible news of the death of a young construction worker in an atrium colllapse at a Lend Lease site at Curtin University in Perth. Two workers injured & taken to hospital. Emergency services, WorkSafe & CFMEU officials are on site. #ausunions #auspol

Students were sent a text alert saying, “There has been an accident on the construction site of Building 418” and to avoid the area.

Lend Lease, understood to be the building property manager, has been contacted for comment.