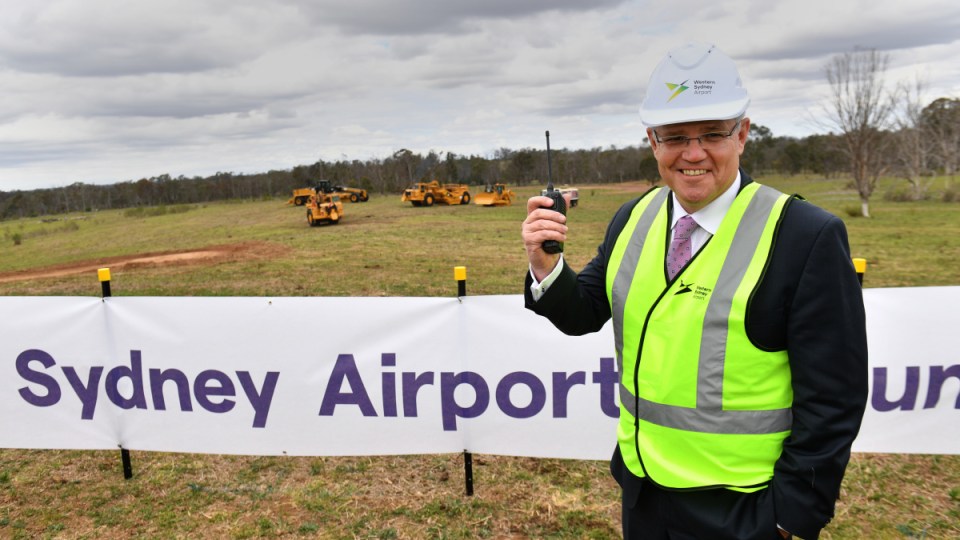 Scott Morrison has scorned the infrastructure department for its controversial 2018 purchase of land for the Western Sydney airport, saying “it won’t happen again”.

Last week’s auditor-general’s report into the purchase of the so-called ‘Leppington Triangle’ – a 12-hectare slice of land at the end of a proposed additional runway for the Western Sydney Airport – raised “ethical concerns” about the conduct of infrastructure department officials.

The scathing auditor-general report savaged the decision process around the purchase – more than $30 million spent on a property later valued at just $3 million – from Leppington Pastoral Company. It is the dairy company of billionaire brothers Tony and Ron Perich and has previously donated large sums to the Liberal Party.

The PM, who was treasurer at the time of the 2018 deal, weighed in on the scandal for the first time on Tuesday, saying he was “disappointed”.

“I agree with the auditor’s report. These events are not things I’m happy about,” Mr Morrison said.

On Monday, Deputy Prime Minister and Infrastructure Minister Michael McCormack said the deal was a “bargain” and the purchase “eventually will be hailed as a good decision”. Mr Morrison said he was not happy about the circumstances, and claimed the deputy PM “feels equally disappointed”.

“I don’t think it’s something that I would ever like to see repeated,” he said.

“When it comes to the processes that led to that decision, I’m not happy about it. The officials understand that. This happened some years ago, as you’d appreciate. Now that it’s come to light and has been brought to our attention, we’ll ensure it won’t happen again.”

In a wide-ranging press conference on Tuesday – called to announce the government’s plans for an $800 million federal budget spent on technology and his “digital JobMaker plan” – Mr Morrison also said that Australia’s hotel quarantine system might be in line for changes.

As the federal government prepares to open Australia’s international borders to 6000 returning travellers each week, up from 4000, the PM said people might be allowed to quarantine at home – not just hotels, as under current arrangements. The Australian Health Protection Principal Committee is considering the way forward, he said.

“I think home quarantine can play a role in the future and it’s something that is being considered by the AHPPC and particularly as we move beyond the phase we’re in now,” Mr Morrison said.

He flagged that people coming from “safe locations” might be eligible for such a scheme, flagging nations such as New Zealand, South Korea and Japan.

“I think as time goes on, we will need a more flexible approach that gives us more options for managing this, so I think that is something that is under active consideration,” Mr Morrison said.

When asked about Victoria’s hotel quarantine situation, and its inquiry wrapping up on Monday with blistering criticisms of senior bureaucrats from counsel assisting the inquiry, Mr Morrison said it was “a question for the Premier”.

Earlier on Tuesday, Victorian Premier Daniel Andrews said he still had confidence in government officials who were criticised in the inquiry.

“I’m confident that they are doing the very best they can and they are acting appropriately,” Mr Andrews told his own press conference in Melbourne.

“That is what everyone is doing. This strategy would hardly be working as it most certainly is, if that were not the case.”

Despite the PM rebuffing questions, Treasurer Josh Frydenberg – standing alongside Mr Morrison – called on Victoria to fast-track its re-opening timetable for schools, flagging issues around mental health of young people.

“I cannot see why all students can’t get back to school in Victoria now,” he said.

“I’ve read letters from well-regarded doctors and GPs, open letters to the Premier of Victoria, and they speak of the mental health state of young people in Victoria as a result of the lockdown … So I say to the Premier” follow the medical advice but please get Victorian children back to school at all levels.”

Mr Morrison said reopening was a matter for Victoria but that the federal government had “sought to work with them to highlight areas where we think we could move more quickly”.

“But we do that behind the scenes, working in good faith with the Victorian government. Do not take an absence of commentary from this platform as an absence of engagement between officials and otherwise,” he said.