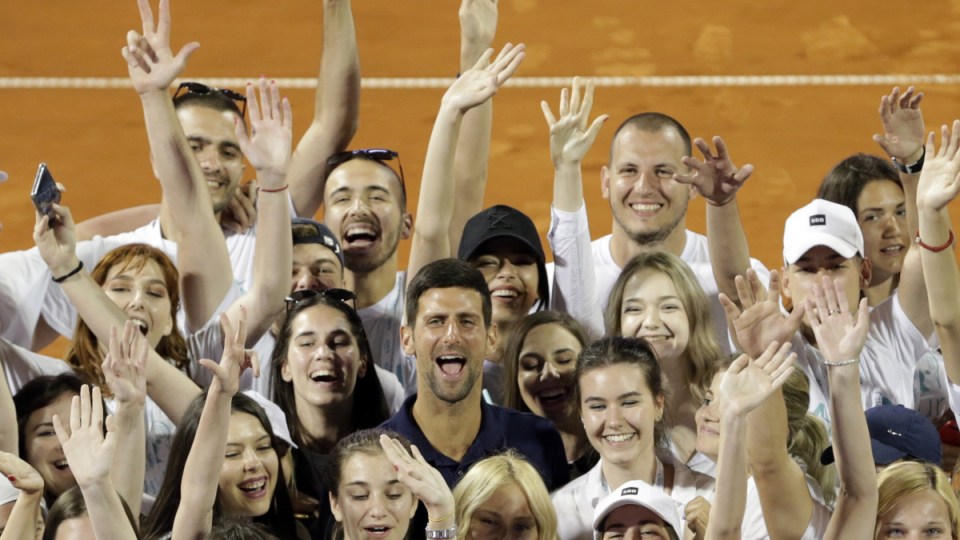 Novak Djokovic, posing with volunteers at the Adria Tour tournament in Belgrade on June 14, has tested positive for coronavirus. Photo: EPA

In a statement released to Serbian media on Tuesday (local time), the 33-year-old Djokovic said he and his wife Jelena had been infected, while their children Stefan, 5, and Tara, 2, returned a negative result.

“The moment we arrived in Belgrade we went to be tested,” Djokovic’s statement read.

“My result is positive, just as Jelena’s, while the results of our children are negative.

“Everything we did in the past month, we did with a pure heart and sincere intentions.

“Our tournament meant to unite and share a message of solidarity and compassion throughout the region.

“The [Adria] Tour has been designed to help both established and up-and-coming tennis players from south-eastern Europe to gain access to some competitive tennis while the various tours are on hold due to the COVID-19 situation.

“It was all born with a philanthropic idea, to direct all raised funds towards people in need and it warmed my heart to see how everybody strongly responded to this.

“I am extremely sorry for each individual case of infection. I hope that it will not complicate anyone’s health situation and that everyone will be fine.

“I will remain in self-isolation for the next 14 days, and repeat the test in five days.”

He took to Twitter on Monday to remind fellow professionals that the COVID-19 pandemic that has shut down tennis is not to be taken lightly.

“Speedy recovery fellas, but that’s what happens when you disregard all protocols. This IS NOT A JOKE.”

Upon hearing the news, Kyrgios responded with a simple “Oh boy”.

But it wasn’t long before he compared the Serb’s actions as ‘‘irresponsible’’ and ‘‘stupidity’’ to anything the outspoken world No.40 had done.

Djokovic, who has won 17 grand slam singles titles including eight Australian Open championships, is also facing a backlash after videos surfaced of him partying at a Serbian nightclub with fellow players days before the outbreak at his event.

A minute-long video shows Djokovic dancing shirtless next to several players, including Grigor Dimitrov, who became the first big name in the tennis world to test positive for COVID-19.

Along with Dominic Thiem and Alexander Zverev, they were filmed jumping up and down on stage at Croatia’s Lafayette Cuisine Cabaret Club, which was the first stop on Djokovic’s Adria Tour exhibition tournament.

The video, which has racked 60,000 views on Twitter, has drawn criticism after Borna Coric revealed he was the second high-profile player to test positive after attending Djokovic’s organised event.

Djokovic has been criticised for organising the tournament and bringing in players from other countries amid the coronavirus pandemic.

Troicki said on Tuesday that he and his pregnant wife have both been diagnosed with the virus, while Dimitrov, a three-time grand slam semi-finalist from Bulgaria, said on Sunday he tested positive.

Borna Coric played Dimitrov on Saturday in Zadar and said on Monday he had also tested positive.

There were no social distancing measures observed at the matches in either country.