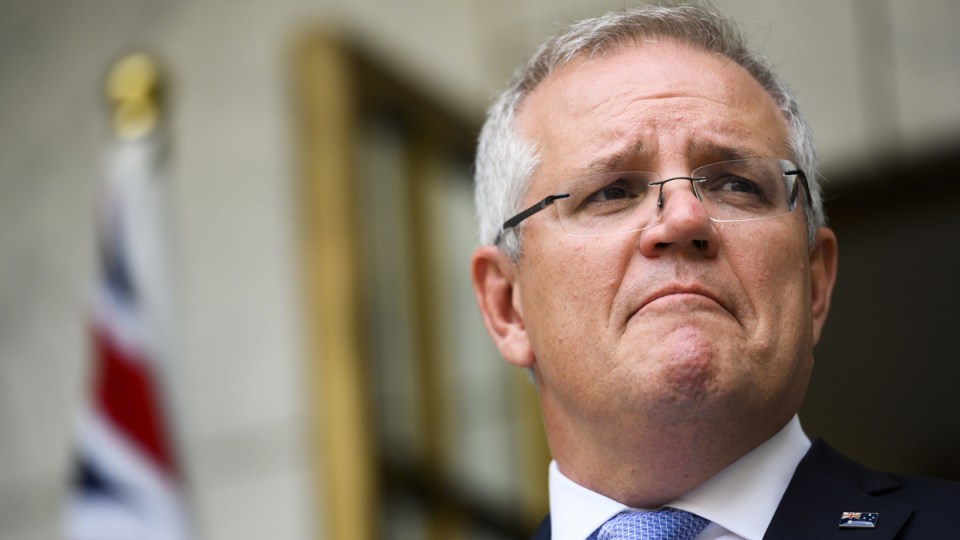 Scott Morrison has been recycling old announcements ahead of the Eden-Monaro by-election.

Maybe it was a happy coincidence, but Scott Morrison’s re-announcement of fast-tracking major infrastructure projects coincided with the opening of voting in the Eden-Monaro by-election.

After assuring everyone he couldn’t keep spending at the rate of the past few months, the Prime Minister nevertheless was able to find “a further $1.5 billion to immediately start work on small priority projects identified by the states and territories”.

The opposition has no doubt many of these “priority projects” will turn up in the vast southern NSW electorate, but equally Labor is finding announcement fatigue and scepticism is rife in the hitherto bellwether seat.

No one will be more disbelieving than the residents of the tiny village of Bumbalong.

Still living in caravans and tents, their story of shattered dreams and broken promises is symptomatic of the government’s credibility problems.

Karen and Mick Gallagher’s house was one of six incinerated in just one hour, leaving it a pile of ashen rubble.

Mr Gallagher says three weeks after the blaze they tried to access Mr Morrison’s immediate relief, only to be told the maps showed their village was not fire-affected.

This bumbling incompetence is almost a poetic play on the town’s name.

Still living in a caravan, the Gallaghers feel like “they have been abandoned”.

Another victim wondered “why more resources haven’t been allocated to get the cleanup rolled out faster”.

In Parliament, Labor leader Anthony Albanese reminded the Prime Minister that the Reserve Bank governor has called for infrastructure spending to be fast-tracked to support jobs “at least 11 times” and he wondered if it took a pandemic to wake up the government to the need.

He indignantly replied that the government “has been running a $100 billion, rolling 10-year program for infrastructure development”.

Back in 2013, the Liberals identified the Barton Highway, a key road in Eden-Monaro, for upgrading.

Yet another announcement that it will happen is expected next week, seven years after the first promise.

This lack of performance for regional Australia has prompted the Shooters, Fishers and Farmers Party to run a candidate in Eden-Monaro.

Its leader, Robert Borsak, lived up to a threat made a couple of weeks back when he flagged that the party was unlikely to preference the Coalition.

It’s a threat the ballot draw made particularly potent when party candidate Matthew Stadtmiller won the top spot on the ticket.

The so-called “donkey vote” could add as much as 1 per cent to his support, which would then flow to Labor’s Kristy McBain. In a tight contest, this could be critical.

He yelled at Mr Albanese across the dispatch box, asking “what sort of shoddy deal he’s done with the Shooters Party”.

The Liberals are just as miffed.

Senator Jim Molan, who failed to win the Shooters’ favour, then somewhat ironically accused Mr Albanese of doing a suspect deal “with a party that has long history of advocating the repeal of the Howard gun laws”.

Mr Albanese explains Labor’s decision to put the Shooters ahead of the Coalition as making it easier to register a formal vote for any who follow the ticket.

The Nationals gave ammunition to Labor by putting the opposition party No.4 on their how to vote – still behind the Liberal but on a 14-candidate ticket hardly sending the message that Labor is a diabolical threat.

The stakes are clearly high for everyone, but nowhere more so than Mr Albanese’s need to show he can appeal to voters.

Mr Albanese is leaving nothing to chance. He has made more than a dozen visits to the electorate and is not sticking close to Canberra, as is the Prime Minister.

The Labor leader is highlighting the need for climate action in the wake of the catastrophic bushfires.

It dovetails with the Shooters’ reminder on day one of its launch at Cobargo.

Mr Stadtmiller said voters should remember that when Cobargo was burning “the Prime Minister was sipping cocktails in Hawaii”.