Australian parents pay almost four times as much as their international counterparts for child care, forcing parents out of the workforce and leaving children without a head start in learning.

By international standards, Australia has one of the highest out-of-pocket child care costs in the world, behind the United States, United Kingdom and New Zealand.

The fees have burned holes in the pockets of families for decades, and calls to overhaul the system have resurfaced this week with the government’s announcement it will end free child care (enacted during the pandemic) next month.

“Child care cost is the big constraint on Australian families,” Ms Griffiths said, a budget policy and institutional reform fellow at the institute.

“The fees are particularly higher than in comparable countries. Even though we do have a good subsidy scheme, it needed to be more generous even pre-crisis.

“Now lots of families will be suffering reduced income, it’s likely it will become a bigger issue.” 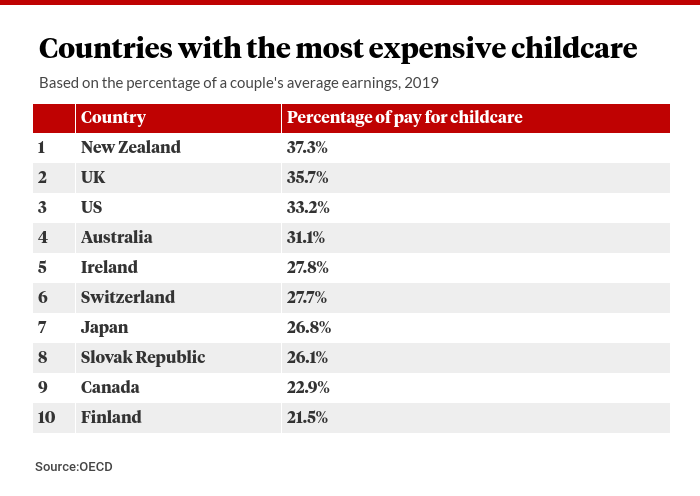 The childcare subsidy is means-tested, but for many families it is too expensive, making the ‘1.5 earner model’ – where usually the father works full-time and the mother part-time– the norm in Australia for families with children in child care.

And the proof is in the numbers – just 15 per cent of three-year-olds in Australia attend early learning, compared to an average of 69 per cent in other developed countries.

On average, Aussie families sending their children to child care pay between 30 and 40 per cent of their household income – the OECD average is just 11 per cent.

Our child care might be expensive, but it’s of the highest quality, Australian Childcare Alliance president Paul Mondo said.

“The National Quality Framework is the envy of many countries across the world,” said Mr Mondo, who heads up the peak body for childcare operators.

A combination of properly trained staff and a good ratio of staff to children is part of the industry regulations, he said. “If comparing Australia to the US there is a vast difference to the regulatory settings, it’s the complete polar opposite.

But there is one simple way to make it affordable, Ms Griffiths said – and that’s by raising the subsidy to reduce the disincentive to work.

“For low-income families, the cost is a huge factor,” she said.

“There is a higher subsidy for low-income families, but it tapers off as your income reduces. The taper rate is quite steep.

“So the disincentive to work is really high because of the taper rate in the subsidy.

At the end of the day, it comes down to what the Australian public wants.

Cheaper child care? You have to pay for it, said professor of early childhood at the Queensland University of Technology Susan Irvine.

“Basically it all comes down to the investment government and the community are prepared to make,” Professor Irvine said.

“It comes back to what we are prepared to invest in. That makes it affordable and accessible to all families.

“It’s important to think about this. The benefit is high-quality services. This is about the education benefits to children.

“In other countries, the early childhood system is considered high quality.

“Those countries treat it as a school system so they’re investing in a way that can be accessible for everyone.”