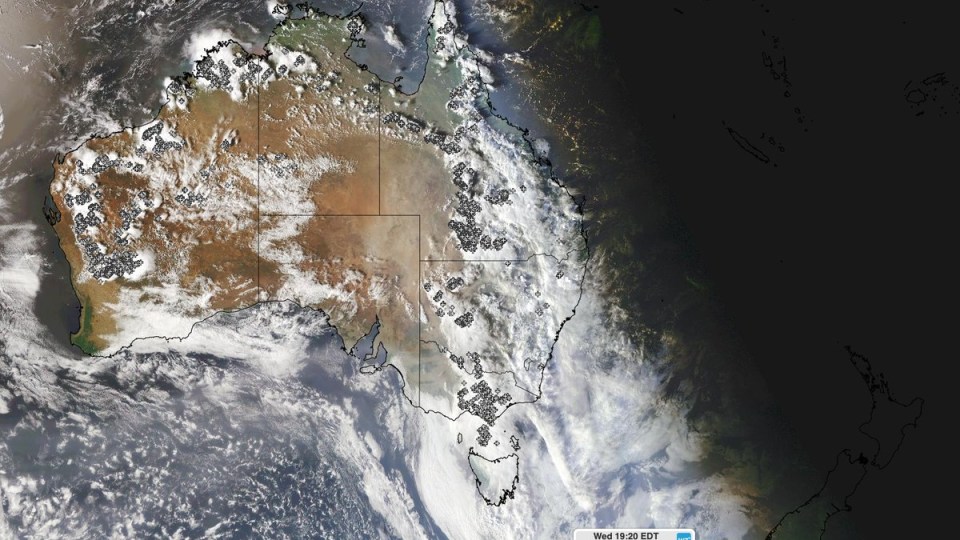 Thunderstorms, heavy rain developed over eastern and southeastern Australia during the last 24 hours, with more to come. Photo: Weatherzone

Much-needed heavy rain has fallen across NSW, Victoria and South Australia, bringing relief to battle-weary firefighters, but there are concerns landslides, flash flooding and contaminated water flowing into river systems will impact towns and cities in the days ahead.

The widespread severe storms are likely to continue over the weekend across eastern Australia, with forecasters warning of a second weather system of so-called “supercell storms” emerging next week.

“We could see widespread severe weather with damaging wind gusts, further flash flooding and we could even see supercell storms,” Mr Saunders said.

“So there’s going to be some big rain.”

In the past 24 hours in Sydney, the bureau of meteorology recorded falls of between 20-40mm with a forecast of up to 80mm during the next four days. The RFS said there had been “good falls” in several fireground areas especially in the Hunter region where 10-15mm fell overnight.

The NSW Blue Mountains suburb of Faulconbridge recorded the state’s highest rainfall with 45mm while bushfires near the Biriwal Bulga and Cottan-Bimbang national parks received some help with 38.2mm recorded in nearby Mount Seaview.

Areas around the south coast and Southern Tablelands are predicted to receive up to 30mm but BOM says the rain will be patchy.

BOM forecaster Abrar Shabren told the ABC debris could prevent water from being absorbed into the soil and could lead to an ash run-off.

“Flash flooding is generally a concern with thunderstorms and ponding of water on roads.

“Depending on how much vegetation is left, how much bushfire the ground has gone through, that can also add to the impact of flash flooding as well,” Mr Shabren told the ABC.

He said bushfire areas, particularly in elevated regions, were also “vulnerable” to landslides and toppling trees during thunderstorms because fires would have weakened the vegetation.

Mr Shabren warned an inland trough deepening across the state is driving humid air, leading to more thunderstorm activity across most districts.

“We will continue to see severe thunderstorms throughout the week, with very heavy, short, sharp bursts of rainfall,” he said.

The impact of run-off from rain in bushfire affected areas has had an impact on the Macleay River in northern NSW, where locals have reported thousands of fish have been killed after rain washed bushfire ash into the river system.

However, there is some good news.

Conservation authorities say they have saved the last of the wild Wollemi pine population in the Wollemi National Park from the Gospers Mountain megablaze, which is now under control.

Specialist firefighters were dropped into the undisclosed site from helicopters to lay an irrigation system, while fire retardant was also used. NSW Environment Minister Matt Kean said two trees were lost but the species would survive.

“The fire did go through there, we had a few days of thick smoke so couldn’t tell if they’d been damaged. We waited with bated breath,” Mr Kean told ABC Radio.

There are 88 blazes continuing to burn across the state.

Hey #Sydney! You're looking mighty fine under that #rain this morning! Best fall overnight in the metro 18mm at #Penrith. Today the chance of a #thunderstorm in the Sydney basin, mainly this afternoon and evening, with possible heavy rain. Latest forecast: https://t.co/6WjMBCQ4e1 pic.twitter.com/QYYsOYeBQe

Victoria welcomes rain but does little to ease fires

In southern Victoria, heavy rain, flash flooding and thunderstorms swept across Melbourne and into the eastern part of the state overnight but did little to extinguish bushfires in the alpine and East Gippsland regions.

Flights were diverted back to Sydney and Canberra as storms hit the city, while residents in the northern suburbs watched as hail fell, storm drains overflowed, suburban streets were littered with debris from trees and even a four-metre sink hole formed in the front yard of a Keilor East home..

Some took to social media to describe Melbourne as “The city of Four Seasons in One Day”.

A line of thunderstorms is moving across the state. Storms hit Geelong at 2.30pm dropping 12 millimetres in rain. Soon after a dangerous storm developed over Avalon with 45 millimetres falling in less than half an hour. A severe thunderstorm warning is currently in place. #9News pic.twitter.com/4nhVsRArsQ

While most of the city saw between 10-25mm of rain since Wednesday afternoon, just 5-10mm fell in fire regions – not enough to suppress blazes, some of which have been burning since late November.

Gelantipy, about 50km north of Buchan in East Gippslannd, was an exception with about 20mm as of Thursday morning while in Melbourne’s west more than 77mm fell at St Albans and Avalon saw 49mm with wind gusts of 133km/h.

Victoria’s State Emergency Service received more than 580 calls for help with building damage, trees down and flash flooding, with the district of Brimbank, in the northwest, the worst hit.

Thunderstorms ⛈️ brought intense rainfall to parts of #Melbourne late yesterday, with local flooding and damage. St Albans received 77mm, but a short distance away the northern outskirts of town were mostly dry.

The storm helped clear the hazardous bushfire smoke blanketing the city on Wednesday, which had caused the closure of a runway at Melbourne Airport and delayed some flights.

The Environment Protection Authority has rated the air quality in Melbourne as moderate, though East Gippsland and the northeast of the state are still very poor.

The smoke also hindered efforts to help the 857 homes and business still without power in fire-affected towns in the regions.

AusNet crews from Melbourne joined a police escort into Mallacoota via NSW on Wednesday and are expected to begin restoration works by next week.

“We are working tirelessly to assess and inspect the damage to our network and restore their power as soon as is safely possible,” Managing Director Tony Narvaez said in a statement.

“In doing this our absolute priority is the safety of these communities and of our crews.”

There are 19 active fires across the state with eight watch and act alerts in place.

Showers and inland storms have rolled through Queensland in the past 24 hours dumping falls of 82mm west of Maryborough, 44mm at Richmond, west of Townsville, and 16mm in Brisbane, but the weather bureau says the downfalls are well short of drought-breaking.

Forecaster Jonathan How says rainfall deficiencies in 2019 meant many areas will still be catching up and February is shaping up to be hotter and drier than usual.