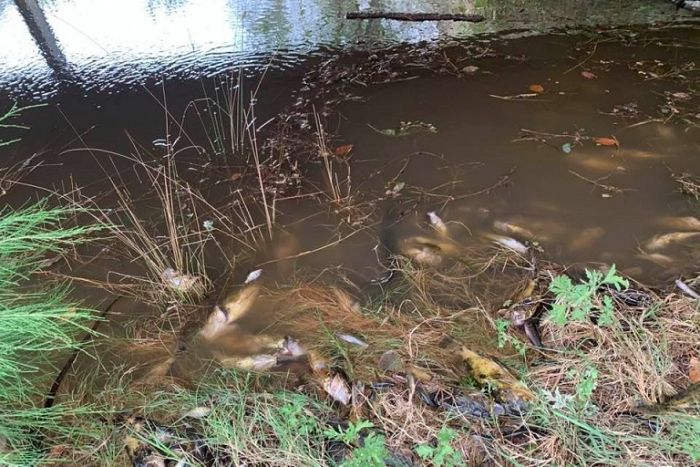 Locals believe hundreds of thousands of fish may have been died after ash runoff from recent bushfires. Photo: ABC

Fisheries experts are monitoring reports thousands of fish may have been killed after rain washed bushfire ash into the Macleay River on the NSW Mid-North coast.

A mass fish kill occurred in a 60-70km stretch of the Macleay River near Bellbrook, north-west of Kempsey, last weekend.

Arthur Bain, who lives near the river, said rainwater from the catchment washed through the river late last week.

He said he initially counted 200 dead fish around the Bellbrook Bridge but believed the figure would be much higher now.

“It’d be in the hundreds of thousands,” he said.

“Talking to other locals further up the river the fish kill stretches possibly 60 kilometres from where the Apsley River feeds into the Macleay system, to well past Bellbrook.

“It’s pretty devastating if you’re looking at a 60-kilometre stretch of river.

“It’s left mud and rotten fish, so we’ve got quite a smell issue at the moment.”

The NSW Department of Primary Industries (DPI) confirmed it received reports of mass fish deaths due to run off from recent rain.

“DPI fisheries staff have been on high alert for these circumstances since the commencement of the bushfire season,” a spokesman said.

“Current rainfall events are adding ash from the extensive bushfires throughout the region into local catchments, as well as other organic material and sediment.

“This can cause rapid drops to oxygen levels in the water.”

When Bellbrook locals first discovered the dead fish they rushed to the river with pumps and hoses to try to re-oxygenate the water.

Mr Bain said it appeared the worst of the fish kill was over but warned it could take years before the river recovered to its original state.

“The immediate crisis is over,” he said.

“But there’s a lot of damage been done.”