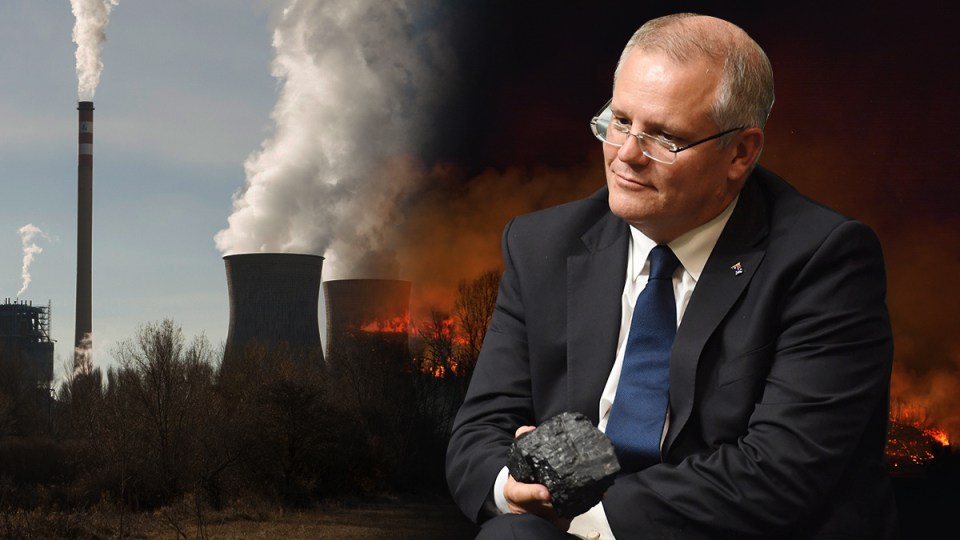 In 2017, then-Treasurer Scott Morrison brought a lump of coal to parliament and urged the nation not to be so afraid. Photo: Getty

Australia’s remarkable prosperity rests on a balancing act. It mines coal, natural gas and iron ore from a vulnerable landscape. It takes ever more money from China while allied with the U.S. military.

With devastating wildfires ripping through its countryside, that balance may become increasingly difficult to maintain.

Australia’s leaders face growing pressure to address climate change, as scientists blame the country’s increasingly hot and dry conditions for the disastrous blazes. That would mean reckoning with Australia’s dependence on providing China and other countries with coal.

The fossil fuel, used to fire many of the world’s power plants and steel mills, is one of Australia’s biggest exports. Coal is also one of the biggest sources of climate change gases, and produces most of Australia’s own electricity.

Prime Minister Scott Morrison, a conservative leader and political ally of President Donald Trump, came to power in part by defending the mining industry. He sees action on global warming as a substantial threat to an industry that directly employs 250,000 Australians and contributes to the jobs of many more.

The fires have prompted a national discussion about climate change and the country’s economy. In addition to the personal harm and environmental damage caused by the fires, they have taken a toll on tourism, another essential industry for the Australian economy. Already, Morrison’s standing in public opinion polls is slumping because of his handling of the wildfires.

The fires “are going to have a massive impact politically,” said Peter Drysdale, a professor emeritus at the Australian National University who is one of the country’s most famous economists, and who has barely left his home in Canberra lately because of heavy smoke outside. “Only the most insensitive political system could not respond to this.”

Curbing Australia’s coal dependence would require tinkering with one of the world’s most successful economies.

Australia has not had a recession for almost three decades. While economic growth is slowing, with the retail and construction industries faltering, the mining industry remains a bright spot.

Coal narrowly trails iron ore as Australia’s biggest export, with liquefied natural gas close behind. Australia’s combined exports of the three natural resources work out to nearly $7,300 Australian dollars (US$5,039) a year for every adult and child in the country, giving broad political influence to the mining industry.

Still, the wildfires are only one factor forcing many Australians to question how long this economic formula will last.

Some worry that Australia has become too dependent on China at a time when the US is pressuring allies to keep some distance. On the military front, China has become increasingly assertive in the Pacific Ocean in the region. China has built the world’s largest navy. It has established close relations with Australia’s neighbours in the South Pacific. And it has constructed air bases on an archipelago of artificial islands across the South China Sea.

At home, Australian voters have also become increasingly concerned about the growing influence of Chinese money in the country’s political scene.

Shifting the world’s 14th-largest economy would be no easy task, no matter how much the government might do.

Australia not only burns coal to generate most of its own electricity but also exports nearly $40 billion a year of the fuel, mainly to Japan, China, India, South Korea and Taiwan. Though China is by far Australia’s largest trading partner, Japan has long been its largest coal customer.

Opinion surveys in Australia over the years have found sizable majorities who favor action on climate change. But as in the US with the Electoral College, Australia’s political system gives greater influence to some regions of the country than to others. One beneficiary is the state of Queensland, in the country’s northeast.

Queensland is Australia’s main coal-producing state. It played a key role when Morrison led his center-right coalition to an unexpected election victory in May.

Beyond the domestic political forces, global climate pacts give Australia little reason to curb exports. Deals like the Kyoto Protocol in 1997 and the Paris agreement in 2015 required countries to focus on limiting emissions of greenhouse gases within their own borders. But these pacts have not restricted international trade in natural resources.

The question instead in Australia has been the extent to which the country might use taxes and other policies to wean itself from its dependence on coal for domestic energy use. An electricity grid that mainly uses coal, as well as long driving distances in the vast country that require a lot of gasoline, has given Australia one of the world’s highest levels of greenhouse gas emissions per person.

Pressure will grow to do something. Estimates of the cost of damage from the fires have ranged from $3 billion to $3.5 billion. Richardson, of Deloitte, estimated that 1 in 10,000 homes in Australia had been damaged.

The fires have also called attention to the vulnerability of Australia’s vital tourism industry. Tourism spending exceeds the combined value of Australia’s annual exports of iron ore, coal and natural gas. Australians themselves account for about three-quarters of that spending.

The tourism industry has not been broadly hit by the wildfires so far because conflagrations have mainly occurred in smaller communities. But the smoke that has at times clogged the air over Sydney and Melbourne could take a toll. The fires could have a much broader economic effect if they damage public confidence and make Australians more cautious about spending money, Richardson said.

At some favorite tourist sites, people who depend on the natural beauty of the land worry that the fires may threaten their way of life.

Jervis Bay, a resort town between Sydney and Canberra on Australia’s southeastern coast, usually boasts beaches of soft white sand and seawater of crystalline clarity. On a recent visit, smoke shrouded the landscape, and the water was murky.

Business owners with fridges full for the summer season worry about the future.

Niel Badenhorst, a cafe owner, said that since the blazes broke out after Christmas, sales were down a quarter. The period around Christmas and January is normally peak season, he said.

“I was worried if the power goes I would have high losses,” Badenhorst said, adding that the cafe’s refrigerators were full of food that would spoil if extensive nearby power failures spread to his community and persisted.

“I hope it will open some people’s eyes,” he said of the government’s inaction on climate change. He mentioned wind turbines that he recently saw lined up along Germany’s coast, and asked, “Why can’t we do that in Australia?”