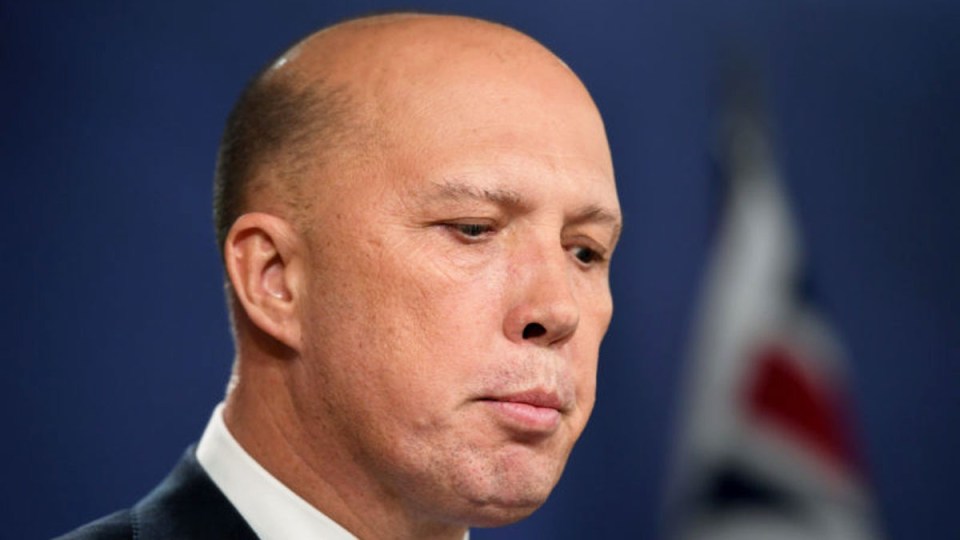 Scott Morrison’s Liberal leadership rival Peter Dutton has raised the stakes even higher in wanting to erode Australia’s freedoms in the name of protecting them.

The powerful cabinet minister, who has extensive control of Australia’s domestic security apparatus and who has been the major driver in the production of an increasing number of draconian bills invading personal privacy and liberties and criminalising journalism, now has climate change protesters in the gun.

As reported in The New Daily, Mr Dutton wants mandatory jail sentences for protesters who disrupt traffic, they should be “named and shamed” and believes they should be stripped of their welfare payments.

It’s the sort of crackdown on protesters being urged on Hong Kong’s puppet government by its political masters in Beijing.

There’s no doubt he has tapped into the sentiment and frustration of many motorists and others caught up in the extreme action of demonstrators gluing themselves to busy roads.

Premier Annastacia Palaszczuk says some of the tactics are dangerous and designed to harm intervening police.

But what are we coming to if we believe the unemployed or other pensioners do not have the same rights as other citizens in this free country?

The Dutton radio interview was on the same day the Prime Minister gave his Lowy Lecture, a major foreign policy speech that said freedom of thought and expression and inalienable human rights “have never been more important”.

They certainly haven’t and the hallmark of such freedoms is the unfettered ability of the media to hold a government and its agencies to account; to assist whistle-blowers in unmasking official wrongdoing.

Again the spectacle of federal agents raiding the Australian Broadcasting Corporation and a journalist’s home for reports that were clearly in the public interest were an international embarrassment and an unmasking of government doublespeak.

The earlier abuse of state power that saw federal police raid the Australian Workers Union offices for the main purpose of discrediting a political opponent has been brushed aside, even though it emerged the cabinet minister involved Michaelia Cash exercised her rights by not agreeing to a police interview.

In his Lowy Lecture the PM attacked “negative globalism” and “unaccountable internationalist bureaucracy” that seeks to impose a mandate on sovereign governments.

Would that be the United Nations and its conventions on human rights and refugees we have signed up to but now disgracefully flout?

Would it also be the World Trade Organisation we, along with Donald Trump demand China should comply with as a “newly developed nation”?

The chutzpah is breathtaking.

Mr Morrison’s cavalier dismissal of journalists’ questions too politically inconvenient for him to answer as “gossip” or “the Canberra bubble” may thrill his cheer squad. But as an exercise in accountability, they smack of arrogance.

Last week, Attorney-General Christian Porter seemed to address some of these concerns when he instructed Commonwealth prosecutors they needed his approval before they could prosecute journalists for certain crimes.

This was dismissed as window dressing by the Alliance for Journalists’ Freedom. Its executive director Olivia Pirie-Griffiths says “democracy cannot work if freedom of the press is at the government’s discretion. It’s as simple as that”.

Alliance member Peter Greste asks “what happens when a story is about the Attorney-General or exposing corruption in his department?”

Political posturing with Mr Dutton being tougher than Mr Morrison is one thing.

Making the Australian democracy weaker is an entirely different and disturbing matter.

Paul Bongiorno: ‘Political posturing is putting our freedoms at risk’