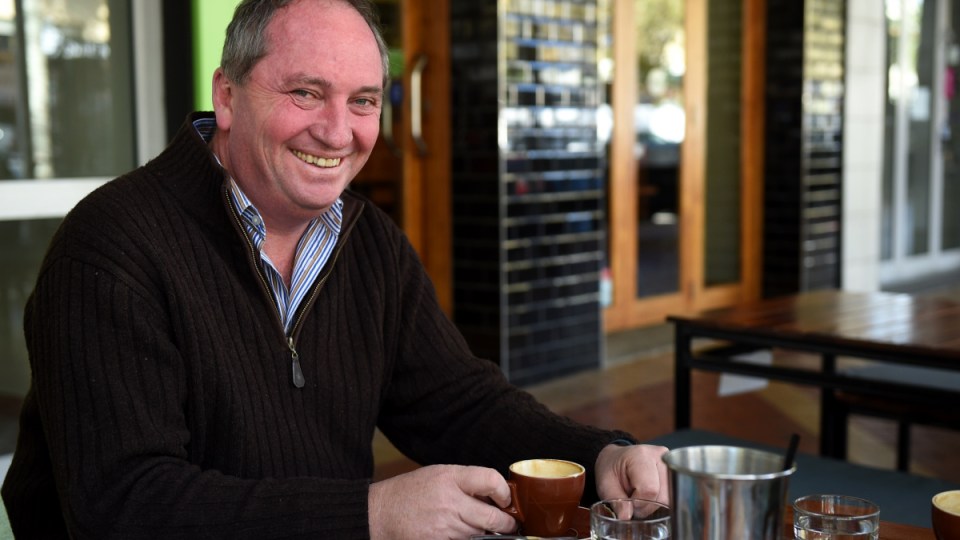 Barnaby Joyce says having a coffee at the end of the month is a treat. Photo: AAP

The words ‘destination’ and ‘lifestyle’ conjure up mental images of moving to the Whitsundays – not living off Newstart.

But that’s how some of our politicians have framed the long-raging debate over whether the $555.70-a-fortnight payment is adequate to live off and if it’s not, by how much and how soon it should be raised.

On Monday it was former deputy prime minister Barnaby Joyce’s turn to step stage right into the light of the welfare debate.

Mr Joyce told The Courier-Mail he eats his own sheep, rarely dines in restaurants and switches off the heater on cold winter nights to make ends meet on his $211,000 parliamentary income.

Mr Joyce said he understood it is now time to lift the unemployment payment after he had to spread his salary around two families.

“It’s not that I’m not getting money, it’s just that it’s spread so thin,” he said.

Scott Morrison emphatically ruled out lifting the $40-a-day rate of Newstart, warning campaigners, including Mr Joyce, they are out of touch with what voters want.

“I’m not going to lead people on about this. You ask me ‘Are we increasing Newstart?’ Well the answer is ‘No, we are not’,” Mr Morrison told Seven News.

While Mr Joyce’s admission attracted the ire of commentators and colleagues  – Pauline Hanson asked, “Where are the tissues?” – he’s not the only one walking the halls of power suggesting those being taxed in the fifth and final bracket ($180,001 and over) aren’t always living large.

Last month Labor’s senior leadership appeared to assent to the claim that $200,000 a year no longer represents the “top end of town” and helped Prime Minister Scott Morrison pass his promised tax cuts.

Shadow treasurer Jim Chalmers echoed his leader’s comments that the wage is “aspirational” and not necessarily wealthy.

“We do acknowledge that … if you’re on a good wicket in this country, we say ‘good on you’. That is a good thing,” Mr Chalmers told the ABC.

After receiving a two per cent pay rise in July, MPs and senators now earn a base annual salary of $207,100.

Newstart has not been increased in 25 years.

While Mr Joyce said he struggles to spread his paycheque evenly, none of our federal politicians should be starving.

One perk of giving a helping hand in Canberra is a $86-a-day meal allowance. During a standard seven-day sitting fortnight in the capital, a local member could be getting $602 for food.

Several of our politicians have been quick to defend those earning six digits, but a few have also defended the current Newstart payments as adequate.

Last year, now retired Liberal MP Julia Banks told ABC radio that she could “live on 40 bucks a day knowing that the government is supporting me with Newstart looking for employment”.

A few current players have also questioned if raising the payment would actually be good for the people on it.

In 2017, then human services minister Alan Tudge said at a $300-a-head luncheon at the Hilton Hotel in Sydney that welfare had become a “destination, not a safety net” for many in Australia.

“Over time, welfare dependence sucks the life out of people and can diminish their capability,” Mr Tudge said.

Just months later, Attorney-General Christian Porter, who was then minister for social services, told The Australian it is “a myth there are a large number of people living on the Newstart allowance alone.”

Mr Porter said increasing Newstart does not help move a single person from welfare to work.

Senator Cash told The Australian that taxpayers expected the welfare system not to be abused by those “who have no desire to work”.

“Australia’s welfare system is there to provide a safety net for those in need — not to fund a lifestyle choice.”

Until recently the Labor Party has been notably silent, only promising a review of the payment before the last federal election.

Last week the review policy was dropped and with one hand the ALP demanded the Coalition government raise the allowance while rejecting the Greens bill to increase the payment by $75 with the other.