A post-coronavirus pandemic world may be further away than anticipated due to vaccine hesitancy among the public, a global poll has shown.

Nearly two-thirds (64 per cent) of people globally said they would not take a COVID-19 vaccine as soon as it became available, the NielsenIQ poll has revealed.

Outright vaccine refusers were in the minority globally, with 12 per cent of those surveyed saying that would not be vaccinated.

About one in 10 people (11 per cent) remain ‘undecided’ as to whether they would get the vaccine. 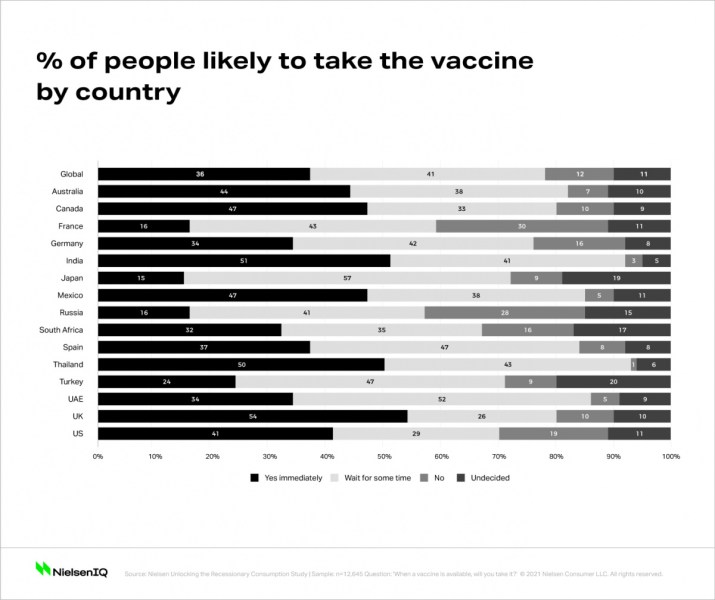 Just 7 per cent said they would not accept the vaccine, while 10 per cent were undecided.

COVID-19 inoculations are already under way in some of the world’s worst-hit countries including the US, the UK, Russia and China.

Australia’s rollout is due to start next month, with the Morrison government copping criticism for what some say is a slow start.

“The conversation surrounding the vaccine has been dominated by logistics: Drug administration approvals, the speed of production rates, countries vying to secure enough doses to vaccinate their populations and, most recently, concerns around scaling and speeding up the rollout in countries around the world,” NielsenIQ’s Scott McKenzie said of the poll results.

But clear signals indicate that the arrival of vaccines won’t automatically flip a switch to put the world back on its pre-COVID path.”

Australians have been warned coronavirus vaccines will not trigger wholesale changes to restrictions when the rollout ramps up in coming months.

Acting chief medical officer Michael Kidd is tempering expectations that jabs will lead to life returning to pre-pandemic settings after the Pfizer vaccine was approved for use in Australia.

The two major unknowns are whether coronavirus vaccines prevent transmission of the virus and if booster shots will be needed each year, similar to the flu.

“That just reinforces for us how important it’s going to be – even though we might get the vaccine rolling out across Australia – that people still adhere to the public health measures,” Professor Kidd told ABC radio on Tuesday.

Social distancing, hygiene measures and other rules, as well as international travel restrictions, are likely to remain throughout the year.

Australia has enough doses of the Pfizer vaccine, which recorded a 95 per cent efficacy rate in late-stage trials, for about five million people.

Aged care and disability residents will be among the first to receive it with the program set to start in late February, two weeks after the first 80,000 doses are due to arrive.

Workers in quarantine, borders, frontline healthcare, and residential aged care and disability are also in the first phase.

The bulk of Australians are likely to receive the AstraZeneca jab, which has a lower efficacy rate of about 70 per cent.

Prime Minister Scott Morrison insisted the strategy is going ahead as anticipated despite the target of four million people being vaccinated by March being delayed.

“There’ll be the odd bumps here and there with production schedules overseas,” he told 2GB radio.

“It means that our vaccination program will not be completely hostage to the production schedules of countries overseas, That sovereign capability to produce the vaccine here we made a high priority.”

Labor has criticised the government’s vaccine portfolio, arguing it is narrower than world’s best practice of five to six different options.

“The federal government has put too many eggs in too few baskets when it comes to vaccines,” Opposition health spokesman Chris Bowen told the ABC.

Mr Bowen has also raised concerns about the delay between approval and the first jabs being administered.

“Australia is far from the first in the queue. It’s definitely not warp speed in Australia.”

“What we know from the clinical trials is that both of the vaccines are very effective at preventing serious disease and, of course, the risk of death from COVID-19,” he said.

“That is the most important issue.”

On Tuesday, the Royal Australian and New Zealand College of Obstetricians and Gynaecologists (RANZCOG) released updated advice for pregnant and breastfeeding women about the vaccine.

“Based on known data from other similar vaccines, it is unlikely that COVID-19 vaccines pose a risk to a pregnant woman or her foetus,” the statement by RANZCOG said.

“However, as pregnant and breastfeeding women have not been included in initial trials, data are very limited and our current knowledge is based on inadvertently exposed patients and the impact of the disease in an unvaccinated population.

“Although the available data do not indicate any safety concern or harm to pregnancy, there is insufficient evidence to recommend routine use of COVID-19 vaccines during pregnancy.”

However, any pregnant woman who meets the definition of being “particularly vulnerable”, including those with significant pre-existing medical conditions, should “discuss the option of COVID-19 vaccination with her obstetrician and/or midwife”, RANZCOG said.

“This is based on the observation that people with certain underlying medical conditions are at very high risk of experiencing serious complications of COVID-19.”