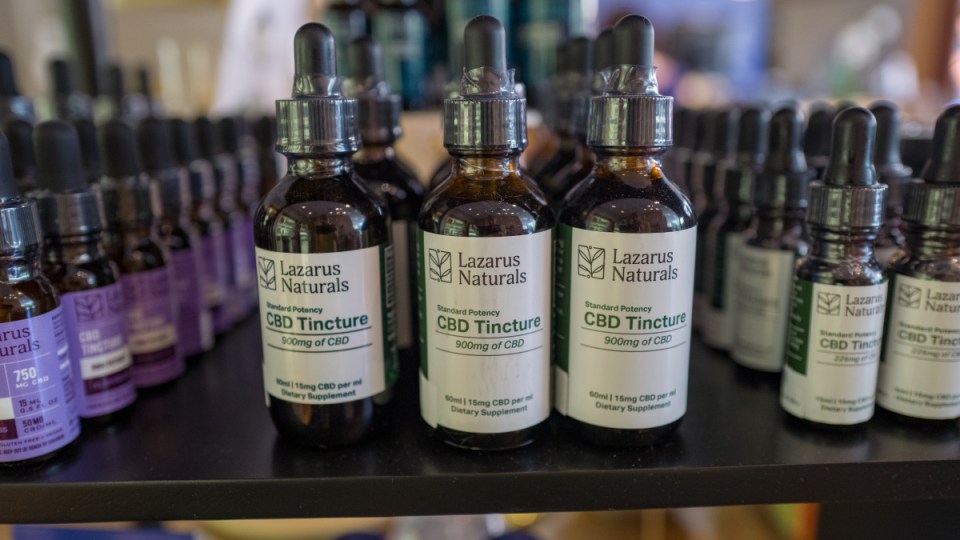 Medicinal cannabis is legal and available but prescriptions are hard to come by. Photo: Getty

At the height of a COVID-related mental health crisis, the Therapeutic Goods Administration has announced that over-the-counter sales of low dose cannabidiol will be made available from pharmacists.

Cannabidiol or CBD is an essential compound of medical cannabis that can be ingested as an oil for the treatment of anxiety or mild pain relief. It can also be rubbed on to the body as a topical treatment of arthritis.

Under the re-scheduling, only oral, oral mucosal and sublingual (under the tongue) forms of CBD will be permitted under the rescheduling. Cannabidiol will have to comprise at least 98 per cent of the total cannabinoid content of what’s sold over the counter.

Will it make me feel wacky?

CBD doesn’t cause a cannabis high, because it doesn’t contain the psychoactive ingredient THC. But some people (including celebrities such as Martha Stewart) report feeling more relaxed when using it.

This is a somewhat radical turn-around given that CBD was classified by the TGA as an S4 drug, and was available only through a convoluted process called the TGA’s Special Access Scheme via an application by a doctor.

The TGA says it downgraded CBD from S4 to S3 (where it it can be prescribed by a pharmacist) to “facilitate greater access.”

CBD and medical marijuana products have been widely adopted as a treatment of psychological conditions – including anxiety, anorexia, insomnia and post-traumatic stress disorder.

Media reports frequently highlight the impact of the COVID-19 pandemic on the Australia’s mental health, including a loneliness epidemic among mainly younger people isolated by restrictions on social engagement.

According to a new report from the University of Melbourne, “levels of mental distress in Australia had doubled since the COVID-19 pandemic began.”

The New Daily has written to the TGA asking if the move to grant easier access to CBD was a response to the nation’s COVID-led mental health issues. The TGA says it will respond with an answer early next week.

Products yet to be registered

There are currently no registered cannabidiol products in Australia. But the TGA advises manufacturers would be free to apply as soon as the ruling is confirmed (in November).

FreshLeaf Analytics, a consultancy group for the medical cannabis industry, says the market for legal products is estimated at more than $1 billion per year. So expect a rush of applications.

Against the advice of its own expert committee

The TGA’s interim decision, to be formalised in November, has met with a mixed reaction in the medical community, including from its own advisory committee.

The committee advised that cannabidiol was linked with adverse reactions including somnolence, diarrhoea and liver dysfunction.

The committee noted that CBD would likely have interactions with other prescribed medicines, and that pharmacists weren’t in a position “to determine appropriate supply.”

The Australian Medical Association, in a submission to the TGA, made a somewhat woolly argument that there isn’t sufficient evidence to support the move:

“There is a risk of normalising the concept that cannabis is a good therapeutic product without established evidence to support it, and potentially dissuades use of products with a genuine evidence-based for benefit.”

The problem there is that, as The New Daily reported, there is widespread support among doctors for these products: doctors were predicted to write 50,000 prescriptions for medical marijuana in 2020.

And that was in January, as the pandemic was making itself known, and visiting the doctor hadn’t become a fraught process.

People seem to be more willing to visit the chemist on the corner than a waiting room harbouring potential coronavirus infection.

What about the mental health community?

The New Daily also approached the Black Dog Institute, Beyond Blue, the Australian Psychological Society and the Pharmaceutical Society of Australia for their opinion on the TGA’s decision, and whether it was a helpful response to our mental health crisis. They either declined to comment or didn’t answer calls and emails.

However, The Royal Australian and New Zealand College of Psychiatrists, in an email, said it gave the TGA qualified support.

“The RANZCP is strongly committed to promoting the use of evidence-based best practice and promoting the development of new treatments.”

Dr Lankra noted that “despite promising results there are still significant gaps” in what’s known about cannabis products.

Dr Lakra also warned that “some population groups may be particularly vulnerable to adverse events resulting from the use of medicinal cannabis products.”

However, “the RANZCP supports the proposed current changes as consistent with policy in several other jurisdictions, and as long as the over-the-counter regulation restricts composition to 98 per cent CBD only.”

Dr Lakra said the RANZCP was unaware of the relation “between COVID-19 and the TGA’s interim decision.”

Direct from your local chemist: Cannabis extract to soothe the COVID blues