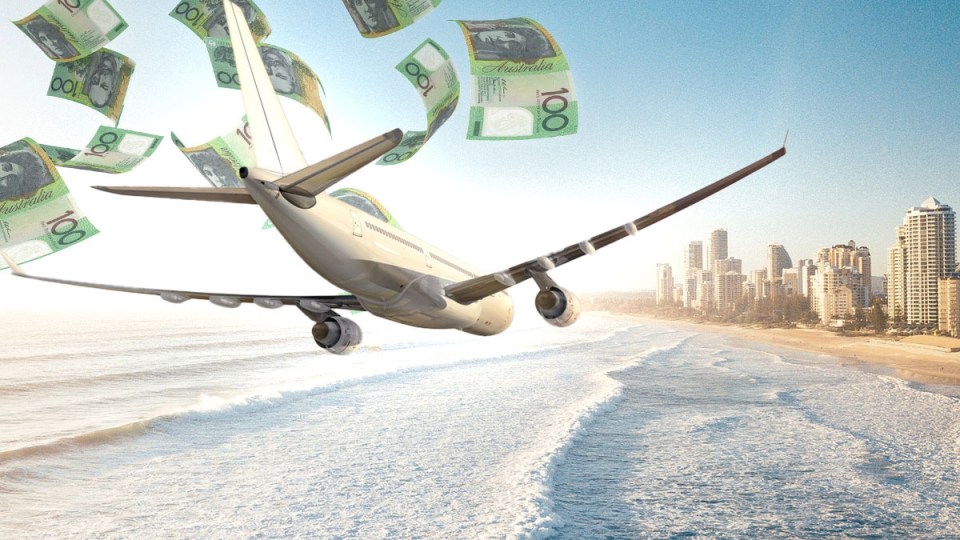 Passenger numbers in March hit 55 per cent of pre-pandemic numbers, up from 41 per cent in December, a report by the Australian Competition and Consumer Commission released on Thursday said.

“There’s all this pent-up demand for for travel. People are sitting on, in some cases, quite substantial savings,” University of Queensland tourism expert Pierre Benckendorff told The New Daily.

Rex’s decision to embark on new city routes could trigger a price war as airlines attempt to outlast each other with low fares, Dr Benckendorff said.

“What it will do for aviation and for passengers is obviously drive down prices. Whenever you have that kind of competitive activity happening on a route, the airlines get very aggressive with their pricing,” he explained.

“And, of course, that’s another strategy for the airlines to try and force the competitors out of the market by pushing prices down and seeing who can hold out the longest on the route before it’s not viable to fly it.”

Although airlines had forecast that pre-pandemic levels of air travel would return in the second half of this year, recent outbreaks of COVID-19 and subsequent border closures “are likely to delay this timeframe”, the consumer watchdog warned in its report.

“Prior to the recent Victorian outbreaks, the domestic airline industry had experienced relatively fewer and less significant disruptions for a number of months, and the combination of cheaper airfares and growing consumer confidence to travel interstate was critical to the recovery,” ACCC chairman Rod Sims said.

Greg Bamber, an aviation expert at Monash University’s Centre for Global Business, said airlines “are likely to recover more once a high proportion of the population has been vaccinated and state borders stay open”.

“Rex has publicly raised concerns that its rivals have been increasing capacity ahead of passenger demand in an attempt to target Rex,” the report said.

The watchdog said it was “assessing the impact on competition of increasing capacity and discounting on certain routes”.

“The ACCC will consider taking enforcement action if an airline’s capacity or pricing practices have the purpose, effect or likely effect of substantially lessening competition,” the report said.

Professor Bamber warned that Qantas may become too dominant.

“Qantas is coming out ahead of its competitors. Qantas is much bigger and stronger than any of its current or potential competitors,” he said.

“Unregulated competition could lead to another airline collapsing.”

Major cities were the biggest beneficiaries of the surge in passenger numbers between December and March.

The number of people flying on routes between the ‘larger cities’ of Sydney, Melbourne, Brisbane, Adelaide, Perth, Canberra and the Gold Coast soared to 1.4 million in March, up 50 per cent on December, the ACCC found.

March also marked the first time since the pandemic began that more passengers flew on routes between larger cities instead of from a city to a regional destination.

The ‘golden triangle’ between Sydney, Melbourne and Brisbane formed the top three most popular routes. 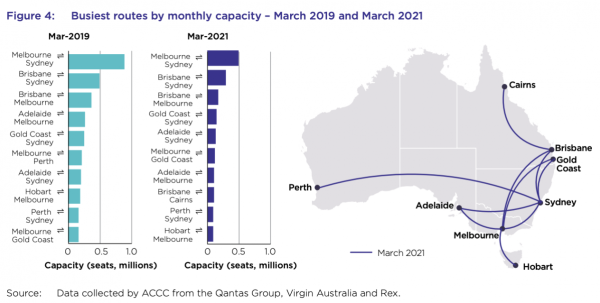 The Melbourne-Gold Coast route saw the biggest surge in passengers with 120,000 monthly passengers in March, which was 72 per cent of the March 2019 capacity.

The Adelaide-Melbourne route fared poorly in comparison, hitting just 39 per cent of its pre-pandemic level in March.

Disease concern for survivors of Afghanistan earthquake
Steve Smith confirmed as starter for first Test against Sri Lanka
Matildas will be keen to forget 7-0 drubbing by Spain
Upcoming stats will reveal where and how hard rates are hitting economy
Victorian MPs pocket a tidy 2.75 per cent pay raise
Reserve Bank review isn’t a ‘get the governor’ exercise: Jim Chalmers
Bookings for New Zealand’s Milford Track sell out in record time
Today's Stories