The AI-powered Google Lens has been added to the mobile image search function in Australia. Photo: TND

Internet search behemoth Google’s futuristic artificial intelligence-powered Lens feature is finally available to us, as part of the firm’s image search for smartphone users in Australia.

Lens uses AI technology to allow phone users to pinpoint items in photos and Google image searches to find out more about them and shop for similar items online.

Users can also point their phone cameras at real-life objects and landmarks and use Google Lens to identify and learn more about them.

The mind-boggling feature was announced in 2017, but was initially only available for Google Pixel and Android smartphone users, before being embedded in Google’s mobile image search in the United States last year.

Lens debuted as part of Google image searches on mobile in Australia on Thursday. It can be accessed via the Google app or image search.

Lens was designed to help smartphone users “do more” with what they see, Google Images product manager Assaf Broitman said.

“When you see an object in an image that you want to know more about, like a jacket that catches your eye, or a lamp in a stylish room, you can use Lens to explore within the image,” he said. 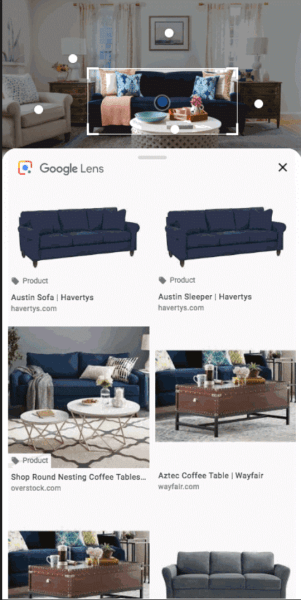 “When you tap the Lens button in Google Images, dots will appear on objects you can learn more about.

Users simply tap a dot or “draw” around the object they’re interested in, and more information will appear.

“Similar to Lens in the Google Assistant and Google Photos, Lens in Google Images uses AI to understand the object, and will show you similar images you can explore,” Mr Broitman said.

“For example, you might come to Google Images looking for ideas to redecorate your living room. During your search, you come across a couch you like in an image, but you may not know what style it is or where to buy it,” Mr Broitman said,

“By using Lens and selecting the couch you like, you can explore related information and images.

“From there, you can learn more about it, or find places where you might be able to buy something similar.”

Users will see dots appear on objects identified by Lens, and can tap them for more information.

Users can also draw around objects of interest inside of an image to get more information and see related content.

Still in its infancy, Lens’ capabilities are expected to develop and change as its use becomes more widespread.

“In the coming months the dots will appear in more types of images, such as landmarks, animals and plants,” Mr Broitman said.