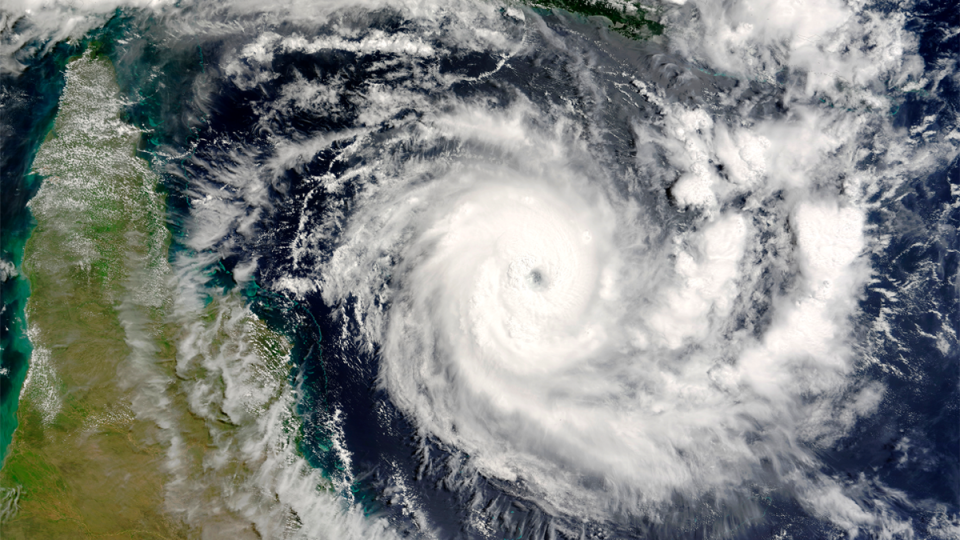 Australians are set to experience the biggest relative increase in severe cyclones in the world. Photo: Getty

A new report has found Australia will experience the world’s biggest relative increase in people affected by severe, once-in-500-year tropical cyclones, as senior government figures call for emissions targets to be axed.

The study looked at historic conditions from 1980 to 2017 and made groundbreaking projections for the 2015 to 2050 time frame.

Compared to recent decades, the number of Australians who will be affected by Category 3 tropical cyclones will jump 9375 per cent by 2050, the international team of scientists said on Thursday.

The Middle Eastern nation of Yemen is set to see the next-highest relative increase in cyclone victims at 2916 per cent, followed by Papua New Guinea at 1442 per cent and South Korea at 935 per cent.

The entire coast of Queensland will be affected by the uptick in cyclones, particularly between Mackay and Townsville.

“These changes should alert governments and policymakers that they might need to update their risk reduction strategies to accommodate for these substantial increases in tropical cyclone risk in the near future,” Dutch researcher Dr Nadia Bloemendaal, who led the team, told The New Daily.

These findings come days after a row emerged within the government over net-zero emissions.

Queensland Senator Matt Canavan on Tuesday claimed that “the net-zero thing is all sort of dead anyway”.

The government maintains it is committed to achieving net-zero emissions by 2050.

Outside of the research paper, Dr Bloemendaal also applied the methodology specifically to Cairns, which happens to be in Senator Canavan’s home state.

She found the likelihood of severe, Category 5 cyclones would increase more than sevenfold.

“For Cairns, we found that the return period of Category 5 wind speeds increased from once-in-2500 years in the 1980 to 2017 time period to around once-in-300 years in the near-future time period,” Dr Bloemendaal said.

“Similarly, Category 3 conditions increase from once-in-50 years in the ‘recent past’ climate to once-in-30 years in the near-future climate.”

In March, the IPCC pointed to Australia as a country that would suffer from “cascading, compounding and aggregate” natural disasters as the climate changes.

At the time that report was released, parts of Queensland and northern New South Wales were dealing with deadly floods.

The Liberal and National parties committed to net zero by 2050 shortly before last year’s COP26 climate summit in Glasgow, but a recent row has erupted within the ranks of the government over what path to pursue.

On Tuesday, Mr Canavan claimed other major countries are abandoning their emissions-reduction commitments – and said Australia should follow suit.

Scott Morrison has distanced the government from Senator Canavan’s comments.

“That is not his party’s position, that’s not the Coalition’s position and it’s not the government’s position,” he told reporters on the campaign trail in Rockhampton on Tuesday.

“That’s his view. It’s no surprise. He’s held it for a long time. It’s been resolved and our policy was set out very clearly.”

Rockhampton is in a region that is expected to see a massive increase in tropical cyclones in future.

Standing next to him was local MP Michelle Landry, who added: “Pull your head in, Matt.”

“I agree with the government’s position, I’m in one of the biggest coal mining electorates in the country.”

Nationals leader Barnaby Joyce initially backed the comments made by Senator Canavan and Colin Boyce, a former state MP who is having a tilt at federal politics at the election.

But on Wednesday, he affirmed his party’s commitment to net zero by 2050.

“We are a party that believes in free speech, and I imagine Senator Canavan will speak on behalf as for how he sees things in central Queensland,” the deputy PM told reporters in Rockhampton.

“The great thing about the National Party is, we tell everybody in the public what we say in private and we have robust conversations in the bush,” he said at the same press conference.

The government’s commitment to net zero by 2050 has been widely panned by climate scientists and policy experts alike.

“This is pure spin,” Climate Council senior researcher Tim Baxter said back when it was announced.

“A document that has the singular purpose of attempting to legitimise the federal government’s do-nothing approach.”

Amid net-zero infighting, Australia is on track for the world’s biggest increase in cyclone victims