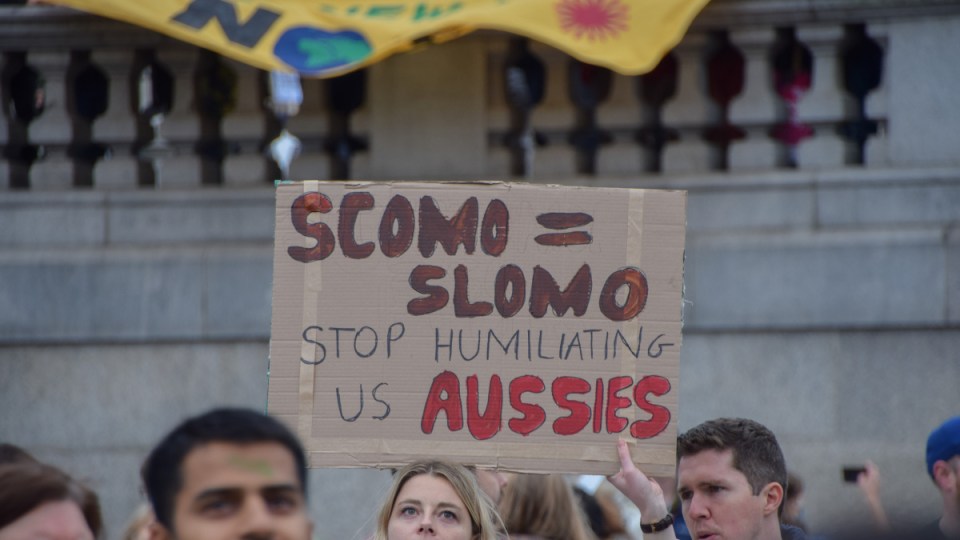 Dr Simon Bradshaw Director of Research (Projects) at the Climate Council
6:00am, Nov 8

There’s a feeling of real momentum in Glasgow.

Having been to five United Nations climate change conferences, including the landmark Paris summit, I can tell you that COP26 in Glasgow feels different.

Have the talks secured commitments sufficient to avoid climate catastrophe? Not yet.

But without a doubt the global dynamics are shifting, with many of the countries that previously dragged their heels now racing to get ahead.

Ask attendees what comes to mind when they think of Australia and, no matter where they’re from, the answer is almost always the same: Bushfires.

Ask what they think of the Australian government’s response to those bushfires – and its lack of urgency in Glasgow – and you’ll find they are feeling angry or confused.

Right now I’m sitting in the Australian Pavilion, which the federal government has been using to promote a series of dubious projects and schemes, most infamously wheeling in a carbon capture and storage model provided by oil and gas giant Santos.

Since arriving, our representatives have spent much of their time here actively promoting fossil fuels. You know, the main driver of climate change that’s putting Australians, our economy and the places we cherish in harm’s way.

Yes, you read that right.

No wonder the rest of the world is angry and confused.

Why would a country that’s paying such a heavy price for the effect of climate change, and that is blessed with such abundant renewable energy resources, be fixated on worsening the problem with coal and gas?

Fortunately, Australia is in a vanishingly small group of climate laggards.

The measure of Glasgow’s success will be whether it kickstarts a truly transformative decade that sees global emissions plummet by 2030.

At the halfway stage, there are reasons to believe it might.

If all new pledges made in the lead up to and during COP26 are fully implemented, researchers overseas and in Australia say we are likely to limit global warming below 2 degrees Celsius this century.

Australia was conspicuously absent from both.

If the government thinks that this pressure will dissipate at the conclusion of COP26, then it has once again misread the room.

The patience of the international community is wearing thin. The longer the government clings to its untenable position, the more that pressure will build, both from outside Australia and within.

Walking through the COP26 conference centre, you can tell the future belongs to countries tapping into every opportunity they have to move beyond fossil fuels and rebuild clean economies.

As one of the sunniest and windiest countries, Australia has the potential to generate renewable energy that far exceeds its domestic needs.

We could be building clean export industries that will become far more valuable than yesterday’s coal and gas exports. Few countries have this natural advantage.

If Australia doesn’t step up and seize such opportunities, our economy will be brutally exposed.

Luckily, many communities and businesses are not waiting around.

Next week I will be proudly representing Australia’s Cities Power Partnership at an event showcasing how cities and regions all over the world (including Canberra) are creating rapid change on the ground.

An overwhelming majority of Australians want our country to be doing more, and the progress we’re making is happening in spite of our national government, rather than because of it.

Australia should aim to reduce its emissions by 75 per cent (based on 2005 levels) this decade.

As a first step, we should match our allies and commit to at least halving Australia’s emissions by 2030.

The sooner we do so, the sooner we can begin unlocking our enviable opportunities, revitalising our regions, restoring our international standing, and helping protect communities from the ravages of climate change.

In years to come, we may view 2021 as when we ushered in a new era of transformative action. Will Australia choose to get on board, or not?

Dr Simon Bradshaw is the Director of Research (Projects) at the Climate Council. He is in Glasgow for the COP26 climate conference

Progress has been made in Glasgow. But Australia is well behind the pack