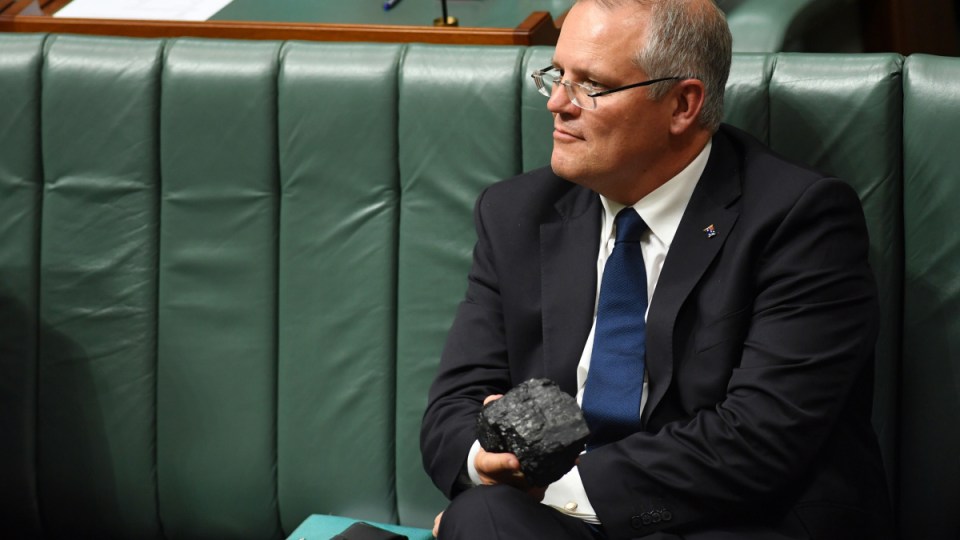 Australians are insecure and frightened by the severe and continuing bushfire crisis. This is fed by the growing awareness that the climate has now warmed by just over 1°C since 1910, and that 2°C is now very likely in a few decades.

Action is urgent but current evidence indicates Mr Morrison is in climate denial and the evidence suggests that an individual’s climate change denial cannot be overcome.

All of us recognise that our death is inevitable. However to stop us worrying about it our brains are able to wall-off thoughts of our own demise and only occasionally do they escape to worry us; these mechanisms are protective. Similarly some of us are able to deny the gravity of our cancer, which is also protective as long as it doesn’t stop us having treatment.

Denial mechanisms also allow our brains to quarantine many other issues that we find unacceptable because of strong religious or political beliefs.

Mr Morrison’s brain seems to tell him climate change is humbug so he would rationalise this fire season as like any other.

On return from Hawaii he was asked about the international independent report that rated Australia worst out of 57 countries; instantly, he said the report was “not credible”. He could have said “Sorry, I haven’t read it yet”, but his brain told him the report could not be true whatever it said.

Most of his climate statements carry the stamp of denial.

Climate policy requires both reduction of greenhouse emissions and protection from the increasing effects of these – adaptation to the new conditions.

Government has a duty to protect its citizens from extreme health events, fire, drought, and heat waves. Average world temperatures are rising so whether this is due to volcanoes, sunspots or an Act of God, this government can deliver a national policy because it does not infringe its denial of the cause – climate change due to fossil fuel greenhouse emissions.

Mr Morrison reluctantly conceded that climate change may be playing a part in the bushfires “along with other factors”.

Belatedly he is acting to produce a national strategy, and is doing so with much self-congratulation in his political advertisement.

The reduction of greenhouse emissions is the responsibility of all nations including Australia. Our domestic emissions per person are amongst the highest of any nation. Emissions are rising and our weak policy is unlikely to meet our modest Paris reduction targets without fiddling the figures.

The policy is a disgrace in terms of what we are capable of as an advanced, wealthy, technological country and our indolence is called out by our disadvantaged and threatened Pacific Island neighbours.

Denial is at the heart of this “policy” and is unlikely to change. Mr Morrison said this in his very first words on returning from Hawaii.

In addition we are the world’s biggest exporter of LNG and the third-biggest of coal and are therefore implicated in the rise of greenhouse emissions from other countries. Furthermore we help some countries to mine their fossil fuels.

This is where the government uses a deception – that we are helping other countries, including under-developed ones, with clean cheap coal and gas; from elsewhere these commodities would be more expensive and dirty. Therefore it is our duty to export it!

Our exported coal competes with and deters renewable energy development in some countries and is a significant factor in a failure to reduce world emissions.

The unprecedented fires in Australia have ignited a bushfire of words in the international media condemning Mr Morrison’s words and fossil fuel policies. His delay to act and the approval of more coal mines while Australia is burning is seen as rabid climate denial.

Statements to international media by Liberal Party stalwarts Tony Abbott and Craig Kelly confirm our madness. Our international standing is falling over.

The economy in danger

Even before the current spate of international criticism, it was apparent to some foreign governments that our government was so intransigent on climate change that only economic threat would be understood.

Climate diplomacy is now part of French and European Community foreign policy and President Macron has already intimated that responsible action on climate change will influence the acceptance of a trade deal with Australia.

Our poor vehicular fuel policy, which harms our lungs and the planet, will be a “technical barrier to trade” in the next round of FTA negotiations.

If the US elects a democratic President later this year, we can anticipate much more pressure on the Government’s priority– the economy.

At home the current bushfire costs are already predicted to be $20 billion over the next decade, from replacement of infrastructure and from lasting health and social costs. Add in the costs of drought, land degradation and….

The public understands the ultimate scenario “No environment, no economy! Unfortunately a climate denial government has trouble with this concept.

The Australian Medical Association and most other doctors’ organisations have declared a climate and health emergency; there has been little comment from government but the public can now understand why there is an emergency.

The AMA has formally recognised #ClimateChange as a health emergency that will have the earliest and most severe health consequences on vulnerable populations around the world, including in Australia and the Pacific #auspol #climate https://t.co/eM6Tzb3a1K

The face of emergency medicine is being changed by fire, flood and storm and emergency departments are stretched by heat stroke victims. Severe continuing smoke pollution is likely to bring more chronic heart and lung disease and shorten lives. Life has changed for many with anxiety, depression and recurrent homelessness and there is no going back.

Doctors aim to work constructively with governments in the interest of patients and community. But when there is needless suffering Government and ministers must be called to account.

The leadership of this government must be changed. The choice is difficult but someone in the Coalition might have a biblical revelation and call for the skills and leadership of a Julie Bishop.

The greatest threat to Western democracy is a party system that places party interest before country. This must change if democracy is to survive and climate change addressed.