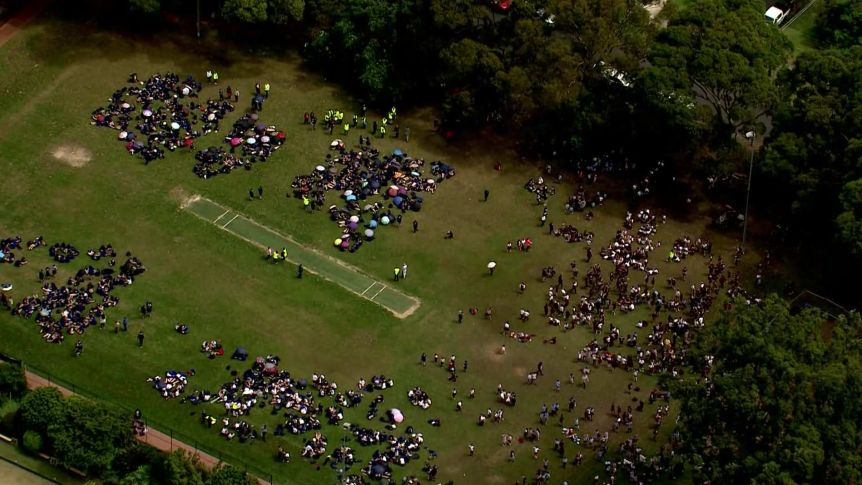 Hundreds of students at dozens of NSW schools have been evacuated this week. Photo: ABC

Students have been allowed to return to a north Sydney school following threats made in a phone call on Thursday morning.

It’s believed the threats were from a copycat and were not linked to the threatening emails.

Students were evacuated about 9.15am as a precaution, as officers conducted a sweep of the area.

Year 12 students have been unaffected and were relocated to a nearby facility for their HSC exams.

However, at least 300 students from 10 schools stretching from the Hunter to the NSW South Coast were forced to drop their pens while sitting their final HSC biology exam on Wednesday.

That followed the evacuation of hundreds of students, teachers and staff from more than 20 schools across Sydney on Tuesday after they received threatening emails.

“The Police Commissioner is working very closely with the Australian Federal Police and federal authorities in relation to those threats,” she said.

Ms Berejiklian said the north Sydney threat was different, and at this stage was not connected to the earlier threats.

“Police are managing the threats in an appropriate way which maintains the safety of students but minimises disruption,” Ms Berejiklian said.

“The Police Commissioner is confident the incident in north Sydney is easier to trace, as it is a local phone call, so police are already onto it.”

Ms Berejiklian issued a stern warning for any copycats.

“The police will come down on you heavily if anybody poses any threat at all to the safety or the wellbeing of our students,” she said.

“Haven’t the students of 2020 been through enough? The last thing they need is this.”

NSW Police Minister David Elliott said on Wednesday the security breach was being investigated by one of the world’s largest team of cybercrime detectives.

“It certainly takes a small and demented mind to interrupt HSC students, after a traumatic year during a pandemic when the nation is at a heightened state of alert in terrorism,” he said.

On Wednesday, NSW Department of Education secretary Mark Scott promised no student would be penalised or disadvantaged by the disruptions.

“There will be special provisions to take place to look after those students – many of those students were able to resume sitting the exam,” he said.

Police are unable to guarantee there would be no further disruptions to about 80,000 students sitting their HSC exams across the state.