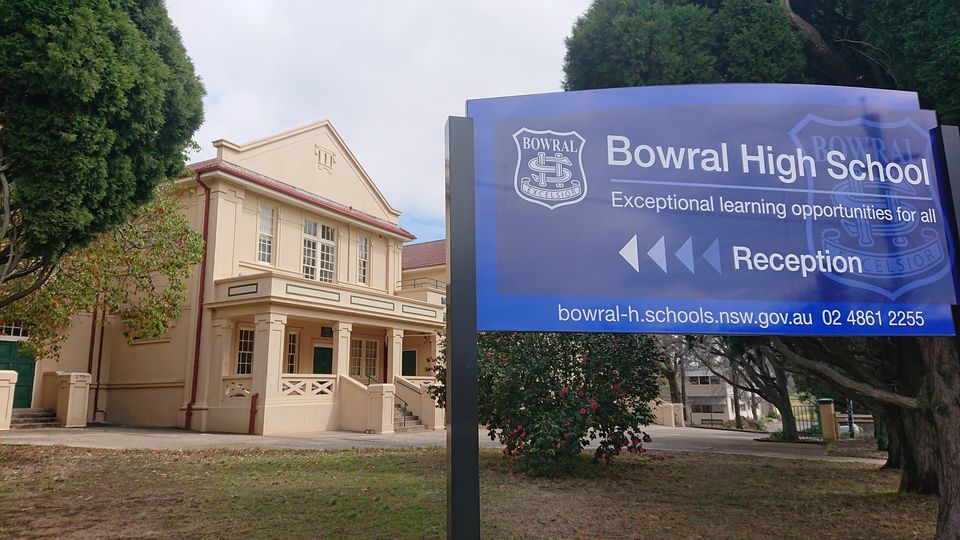 Bowral High School was one of at least 10 schools evacuated on Wednesday. Photo: Facebook/@bowralhighschool

Hundreds of students have again been interrupted during crucial Higher School Certificate exams after a second day of threatening emails and school evacuations.

Mr Scott said many were able to resume sitting the exam, and reassured students that special provisions would be made so that none of them would be disadvantaged by the incident.

Bomaderry High School issued a statement via its Facebook page.

NSW Police Minister David Elliott slammed the anonymous perpetrators of what he called “bastard behaviour” at a press conference on Wednesday.

“It certainly takes a small and demented mind to interrupt HSC students after a traumatic year, during a pandemic, when the nation is at a heightened state of alert in terrorism,” Mr Elliott said.

“I am horrified that an individual or individuals would find themselves so bored that they want to disrupt this very important part in these children’s lives.”

Mr Elliott said NSW police and Cybercrime were “not gonna muck around” and that the offence could lead to a ten-year jail term if the person is found guilty.

Wednesday morning’s scare was the second in as many days, after emails containing bomb threats forced thousands of students across at least 20 schools out of classes – and HSC exams – on Tuesday.

A high school on Sydney’s Lower North Shore was the first to receive threats about 11am on Tuesday, via an anonymous email.

The schools all enacted their emergency response plans, evacuating students and contacting police.

Police believe the email threats are linked and Cybercrime has launched an investigation into the incidents.

He added that the offending behaviour carries with it potential terms of imprisonment.

“We have experience investigating these particular types of matters. But more importantly we are now planning with the Department of Education to ensure that this behaviour does not continue to interrupt the important exams and the activities of schools right across New South Wales,” he said.

On Tuesday many shattered students said they didn’t get to finish the tests they had studied for all year.

“Most people are worried about how it will be marked.”

Mr Scott on Wednesday expressed his disappointment on behalf of students, but was optimistic about their resilience in the face of adversity.

“It’s very disappointing for our students that they have any distraction like this take place, particularly after the year that they’ve gone through.” Mr Scott said.

“But already, year 12 of 2020 have shown great strength, great character, great resilience, and they continued to do so yesterday and today.”

If an exam was interrupted for 40 minutes or more at a school, students would be dismissed and would not have to re-sit the exam, NESA said in a statement.

If an exam was delayed by an hour or more it would also be abandoned and affected students would not sit the exam.

The affected schools would submit group applications on behalf of their students asking for special consideration for illness and misadventure.

Premier Gladys Berejiklian said on Tuesday that she was confident police would find the person or people responsible.

“The students do not need to re-sit the exams, so we are working out the best way to make sure they’re assessed,” she told Sydney radio 2GB.

“It was a very scary thing, but I know police are on to it and I’m confident police will get to the bottom of it.”

Also on Tuesday, Education Minister Sarah Mitchell said the stunt was “a disgrace, not a funny prank” and warned severe penalties would be applied when the culprit was caught.

The main exams affected on Tuesday morning were legal studies and visual arts, but most afternoon exams went ahead as planned.

Ms Mitchell said any HSC student whose exam was disrupted by an evacuation would get special consideration when it was marked.