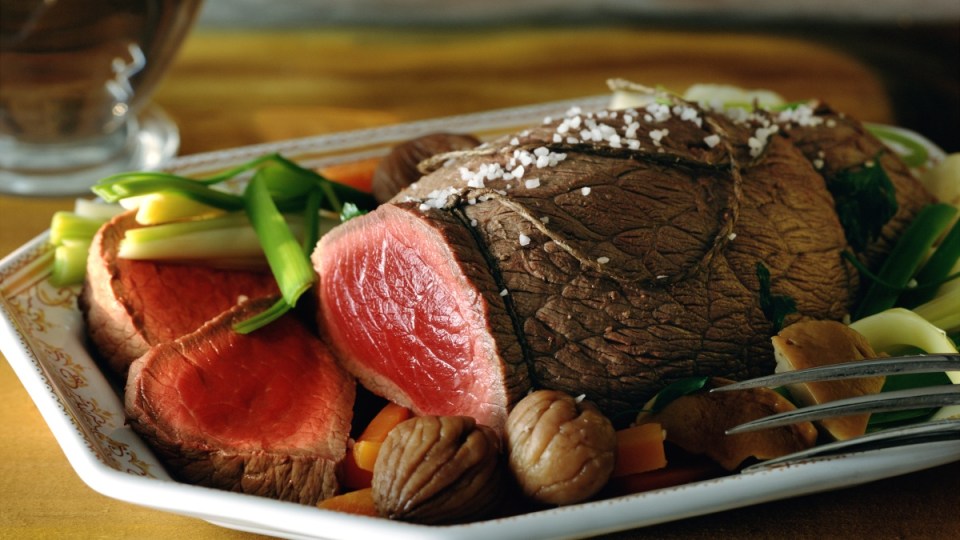 Rare is okay, raw is not. Use a meat thermometer to ensure you're roast is safely cooked. Photo: Getty

Christmas in July! What a great excuse to bring family and friends together. The main idea is to dress the little ones as elves and eat a traditional Christmas-style roast dinner in suitably chilly weather.

What you don’t want, however, are your guests throwing up all over the shag pile because they’ve been poisoned by under-cooked meat.

That’s about as un-jolly as you can get,

As Cathy Moir, Council Chair, says: “Whether you are holding a Christmas in July event or just enjoying a winter roast dinner, there are some safety tips you need to follow to make sure you and your family and friends don’t get sick.”

The main take-away is buy a meat thermometer.

Safety tips for your roast

Whole cuts of red meat such as beef, lamb or kangaroo (that have not been stuffed, rolled, mechanically tenderised or flavour infused) will only have bacteria on the outside so can be cooked to your taste.

Leave the meat to rest for three to five minutes after cooking and before consuming. Eating these cuts of meat very rare (under 63°C) or raw may put you at risk of parasitic infection such as toxoplasmosis.

Minced meat, hamburgers, sausages, livers (or other offal), corned beef and roasts that have stuffed, rolled, flavour infused or mechanically tenderised are higher risk. These should be cooked to 75°C in the centre.

Poultry such as chicken, ducks, spatchcocks, capons or turkey (including their livers) either whole or minced should be cooked to 75 °C in the centre or in the thickest part of the leg if a whole bird.

Cook any stuffing separately as it will slow the cooking and the inside of the bird might not be fully cooked.

Pork in whole cuts such as steaks and pieces should be cooked to 70°C and roasts to between 70°C and 75°C and left to rest for three to five minutes.

Ms Moir said that veggie or vegan roasts are becoming popular so follow any cooking instructions on the packaging or if you make your own cook to 75°C in the centre.

If you prefer fish to roasts cook it to around 63°C or when flesh flakes easily.

Heads down the toilet not uncommon

Ms Moir said there are an estimated 4.1 million cases of food poisoning in Australia each year that on result in 31,920 hospitalisations, 86 deaths and an average of one million visits to doctors.

A third of all Australian households have at least one vulnerable person at risk of severe illness if they get food poisoning. These include pregnant women, the elderly and people with reduced immunity.

About 70 per cent of Australians don’t know the safe cooking temperature for foods that may be contaminated with Salmonella and Campylobacter, both of which are linked to undercooked or poorly handled poultry and meat.

Christmas in July? How to safely cook your winter roasts