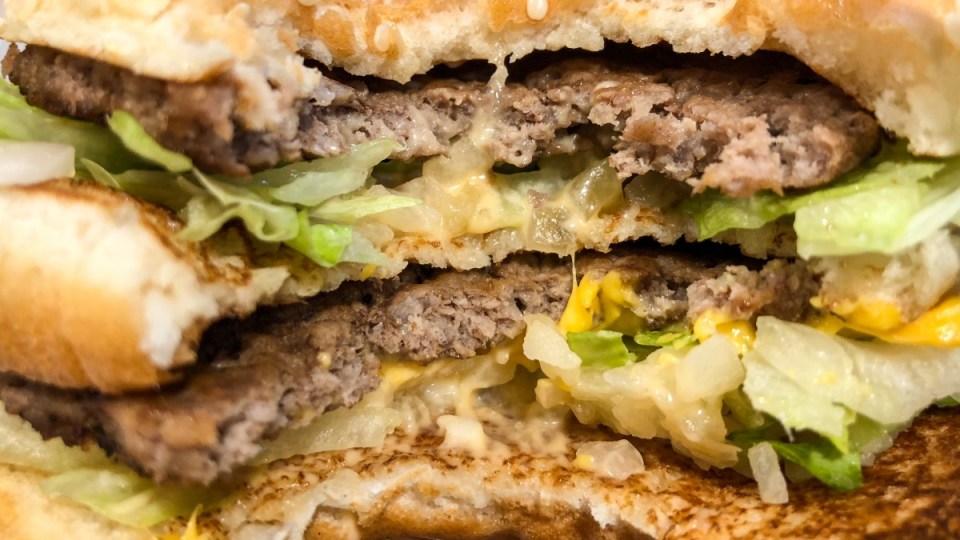 Fast food burgers are as bad for you as they’ve ever been, and Australians are eating them in growing numbers.

That’s despite a menu labelling scheme in 2012 that forced the likes of KFC, McDonald’s and Hungry Jack’s to reveal on menus exactly how many kilojoules each burger contains.

But six years on, new research by the Cancer Council shows Australia’s major fast food burger chains have made no change to the kilojoule count in each of their burgers.

In fact, their kilojoule count – a measure of the energy derived from the burger – has remained largely unchanged since 2009. In some cases the kilojoule count has actually increased, KFC’s popcorn chicken being a case in point.

While globally McDonald’s has seen sales drop as people move to healthier options, Australian sales have actually grown, suggesting government policy may not be working.

With this in mind, The New Daily combed through the menus of Australia’s top five burger chains to find the unhealthiest burger at each chain. This is what we found. 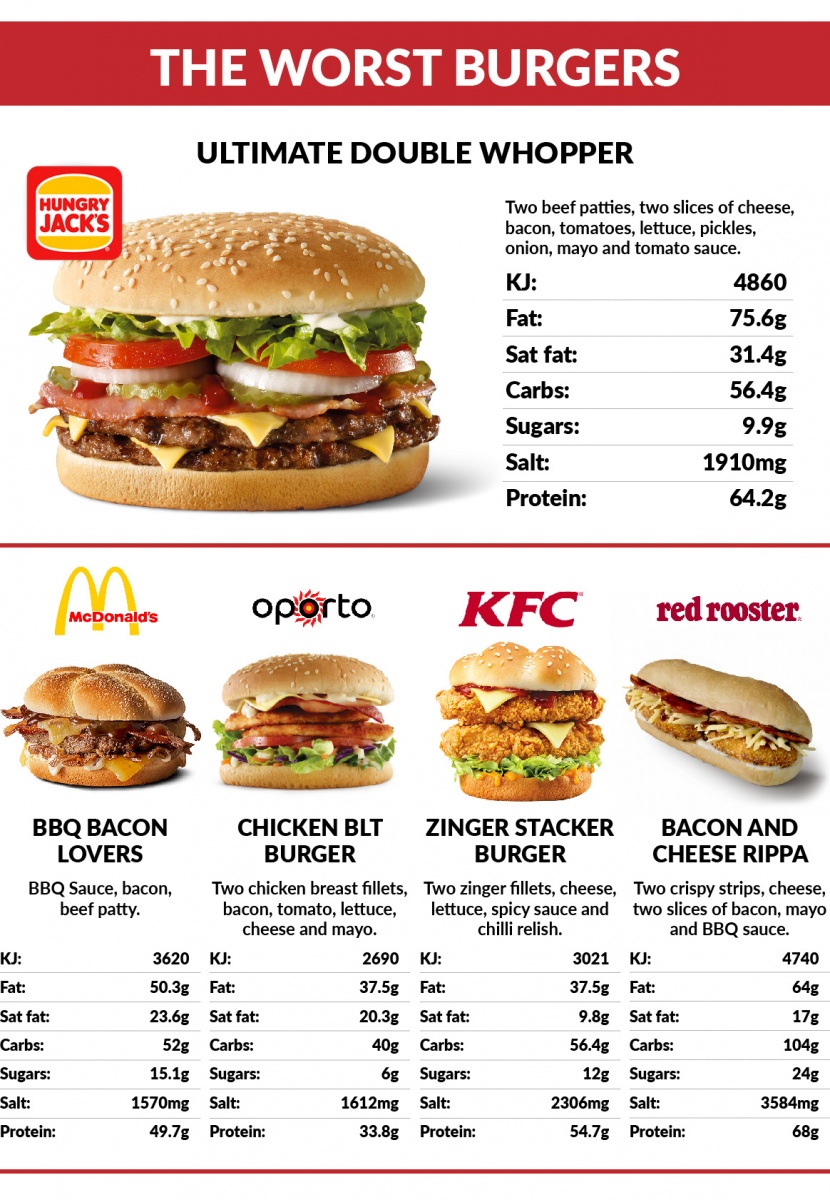 The top gong goes to the gut-busting Ultimate Double Whopper at Hungry Jack’s, with a whopping 4860 kJ. That’s more than half the recommended daily kilojoule intake for an adult.

The Ultimate Double Whopper also had the highest fat content at 75 grams – which is more than the recommended daily intake of 70 grams (see RDI for all the categories here).

It also had more than double the carbohydrates of the Oporto Chicken BLT Burger.

Another surprising finding was that Red Rooster’s fish roll – which may look like a healthy enough meal option – contains 3930 kJ.

The mandatory kilojoules disclosure rules have had no apparent impact on the fast food giants’ ability to sell their high-calorie burgers. 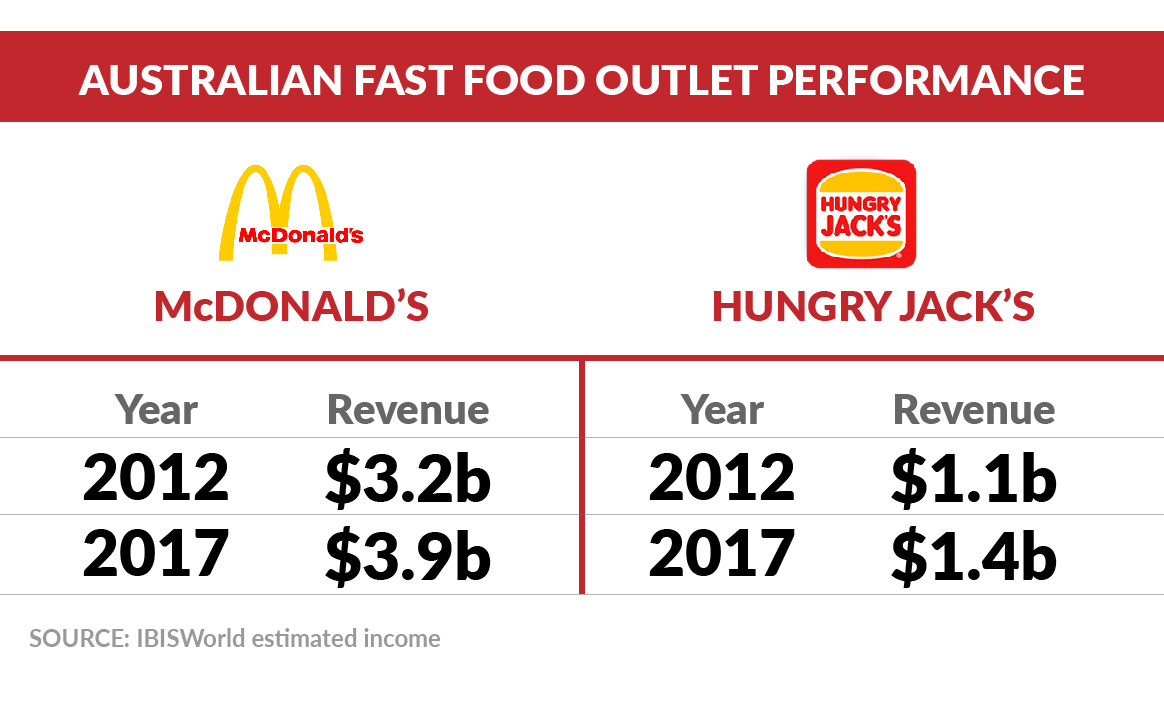 However, the rules did appear to do some good. Jane Martin, executive manager of the Obesity Policy Coalition at Cancer Council Victoria, said research undertaken to evaluate the impact of the disclosure laws found they led to consumers reducing their energy intake in each meal order by 15 per cent.

Clare Hughes, nutrition program manager at Cancer Council NSW, said she was disappointed these fast food outlets had made no effort to reduce kilojoules in their meals.

“We thought these laws might nudge companies to shift kilojoule content to make their products healthier,” she told The New Daily.

“This has just not been the case. Introducing some token healthier items doesn’t undo the damage of the rest of their menu – it’s not good enough.

“We’d really like to see the Commonwealth government take action by working with the fast food industry to set targets, offer more healthy options and modify the amount of kilojoules, fats, salts and sugars in their food.

“We haven’t seen any shift towards reducing these amounts – in fact, we’ve seen some of the burgers become unhealthier, especially the limited edition burgers that seem to be more decadent.”

Ms Hughes said lowering the quantities of these ingredients would have a significant impact on the health of Australians, even if they were reduced incrementally over time.