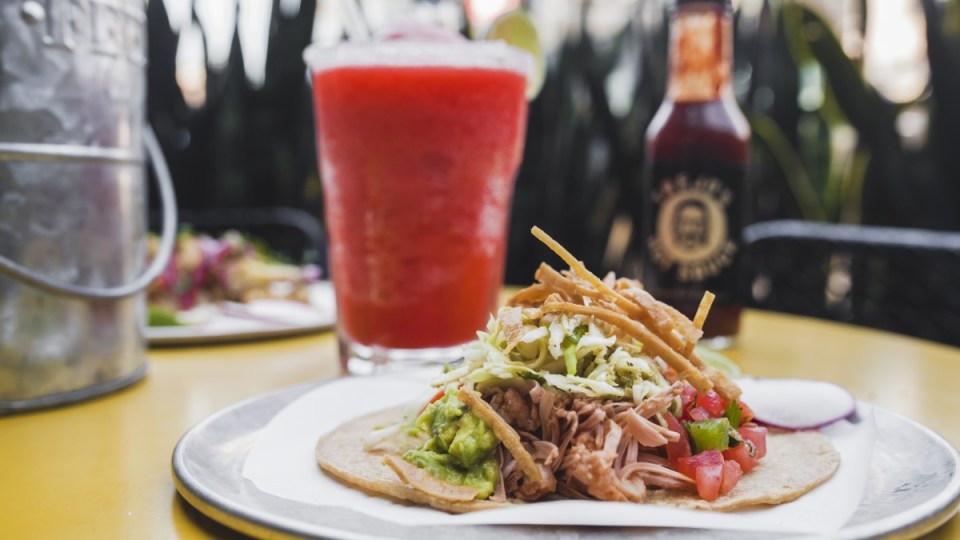 Jackfruit tacos could be mistaken for pulled pork or beef tacos. Photo: Getty

Since adding jackfruit to the menu at her vegan eatery, Allie Pyke and her staff have found themselves having to reassure customers that what they are eating is definitely not meat.

The tropical fruit, which holds the title of the world’s largest tree fruit, is the key ingredient in the Hawaiian burger dished up at Ms Pyke’s The Alley in Melbourne.

At The Alley, jackfruit is prepared to look and taste like pulled pork, as it is at a growing number of cafes and restaurants in Australia.

“I had a girl come up the other day who was devouring it,” Ms Pyke said.

“This poor girl, she was halfway through her Hawaiian burger when she came up to one of the cashiers and said ‘I think there’s meat in my burger and I’m vegan’.

“My cashier had to assure her there was no meat in her burger. She just was so dumbfounded that it was vegan.”

Ms Pyke thinks it is not so much the taste of jackfruit but its consistency that fools people.

“I think a lot of what we eat is based around the sauces and flavourings,” she said.

“When you saute jackfruit with some tomatoes and you create a barbecue sauce and throw in some onions, it creates this really smoky flavour and you create something that’s texturised like meat into a plant-based delicacy.”

While the green, or unripe, jackfruit has little of its own taste and takes on the flavour of whatever sauces or flavourings it is prepared with, the ripe fruit is quite a different story.

Alison Salleras and her husband Peter have been growing jackfruit on their property Fruit Forest Farm, just north of Tully, Queensland, and sending their produce to markets in Sydney and Melbourne for about 15 years.

Ms Salleras said unlike the green fruit, ripe jackfruit had a distinctive taste.

“It tastes like Juicy Fruit chewing gum,” she said.

“We’ve been told by a visitor to our farm who had worked for Wrigleys, as in Wrigleys chewing gum, that the original flavour for Juicy Fruit chewing gum came from jackfruit. Whether that’s correct or not I don’t know.”

She is not surprised that green jackfruit is winning favour as a meat alternative.

“I make a curry out of green jackfruit. I see it as being more like chicken than pulled pork, but if you were to really tease it out and pull it apart I could imagine it would be like pulled pork,” she said.

“With the curry I make, you cut the skin off and you use the whole rest of the fruit. It’s delicious and it tastes like chicken.”

During the jackfruit harvest months from November to March, the Salleras family sends 300 to 500 kilograms of fresh jackfruit a week to markets in the southern states.

Australian jackfruit production is concentrated around Darwin and tropical Queensland.

According to research body AgriFutures Australia, in 2011-12 jackfruit production was around 742 tonnes with an estimated gross value of about $2.6 million, with demand for the fruit rising.

Ms Salleras said the market for jackfruit was still very niche and relatively small, with most of the customers who bought jackfruit at retail markets Asian consumers, who traditionally ate fresh jackfruit in a wide range of sweet and savoury dishes.

But that may be beginning to change, with a wider consumer base becoming exposed to jackfruit as it increasingly finds a place on restaurant menus.

So popular has jackfruit become at hipster cafes and vegan eateries that when Ms Pyke first added it to her menu, she was advised by her supplier of a looming jackfruit crisis due to the fruit’s increasing popularity.

“I bought a pallet. I didn’t want to start a burger, then there be a jackfruit crisis,” she said.

“Well, there’s been no crisis.”

Like many Australian food trends, the jackfruit craze originated overseas.

Last year, the Wall Street Journal identified jackfruit as the next meat alternative among its hot trends in food.

Ms Pyke tips that the trend toward meat alternatives such as jackfruit, along with the broader trend of plant-based eating, is here to stay, suggesting health and environmental concerns will continue to drive consumers to seek out alternative products.

“Plant-based eating used to be the realm of yogis and people living in communes, and I think the trend that it’s moving towards is that it’s just good food for hungry people,” she said.

And while her own cafe tries to be on the healthier side of fast food, she is predicting jackfruit will soon make an appearance on the menu in a different form.

“I think there’s some deep-fried jackfruit in The Alley’s future.”

The fruit that looks and tastes exactly like meat