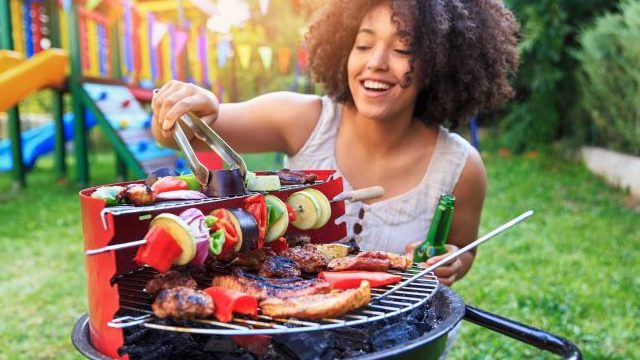 Brines and marinades make for great barbecued meat. So how do they turn a tough cut juicy and tender? Photo: Getty

Every tong-wielding BBQ chef has techniques they swear by when it comes to cooking mouth-watering meat. But what is the science behind these?

To understand the marvel of marinades and the benefits of browning, brining, slow cooking and ‘relaxing’, you first need to get a handle on the structure of meat.

Meat from the butcher is basically skeletal muscle. Zooming right in to its core, you’ll find proteins called myosin and actin — strands of amino acids wound up in long coils, which are responsible for contracting the muscle.

And all this is enveloped by connective tissue, made mostly of another protein called collagen.

On a molecular scale, collagen looks a bit like rope, with three strands of amino acid twisted together.

So how do popular cooking techniques turn all this into a succulent piece of meat?

Using a marinade to tenderise meat

Using a marinade can help break down proteins in the meat.

One kind of marinade relies on acid — in, for example, vinegar, lemon or wine — to free the meat proteins from their tightly organised structure.

And, as they untangle and pull apart, this turns tough meat tender.

At the opposite end of the pH spectrum, substances such as bicarbonate do the same. The problem, though, is that these kind of tenderisers can taste very bitter.

You might have seen recipes that call for crushed kiwifruit or papaya added to marinades.

These fruit contain enzymes called proteases that chop up muscle and collagen proteins — “not all of them, but enough to loosen the muscle fibres”, says University of Melbourne food chemist Ken Ng.

Pineapple juice harbours a one-two punch: proteases plus acid. It can soften up the toughest cuts.

Hanging and ageing meat after slaughter tenderises it in a similar way, Dr Ng says.

Once the animal is dead, muscle cells naturally release their own proteases, which get to work cleaving proteins before the meat is cut up.

Soaking meat in brine before cooking

Soaking a chicken breast in salty water helps water permeate the meat and keep it juicy when you cook it.

And interestingly, the water doesn’t ooze out again when you lift the meat from its bath.

This is because some of the amino acids in the meat proteins have a positive charge and others have a negative charge.

This increases what’s known as the “charge density” of the meat protein.

“The higher the charge density on the protein surface, the more water molecules it can attract,” Dr Ng says.

And the more water in the cells, the juicier the meat.

Browning meat on a high heat …

Chefs will often give their meat a delicious brown crust by cooking it briefly on a high heat.

This sets off the Maillard reaction: a chemical reaction between sugars and amino acids when meat sizzles at around 150 degrees Celsius.

It produces hundreds of flavour compounds. It’s why toast is tastier than fresh bread.

The Maillard reaction is different to caramelisation, which only involves sugars.

For maximum depth of flavour, blast meat with heat at the start of cooking.

… then cooking slowly on a low heat

For barbecuing a roast, or big chunks of meat, cooking low and slow not only cooks the meat evenly all the way through, but also tenderises it.

This is because time is needed to break down the collagen sheath surrounding the muscle fibres.

Intact collagen is very tough, says Dr Ng. Tendons are made of the stuff.

But, when heated slowly and for a long time, the ropey strands of amino acids that make up collagen unwind and break apart, forming gelatine.

Not only does this create a nice gooey texture but also releases the muscle fibres from their tight bundles.

You should try to keep the skin on when cooking meat where possible too, even if you don’t intend to eat it.

There’s plenty of collagen just under skin which melts into the meat beneath, Dr Ng says.

No matter how much hydrating goodness you get into your meat through brining, some moisture will escape during cooking.

Heat draws the water away from the meat proteins, Dr Ng says. That’s why it’s important to rest the meat after cooking.

A little red liquid will ooze out, but if you leave the meat to sit in its own juices for 10 to 15 minutes, the proteins can reabsorb them like a sponge.

The result can be magic when combined with the tenderising effects of marinades and slow cooking.

“That’s when you get the nice, tender, melt-in-your-mouth meat,” Dr Ng says.

Having a BBQ? There’s a science to tender, juicy meat