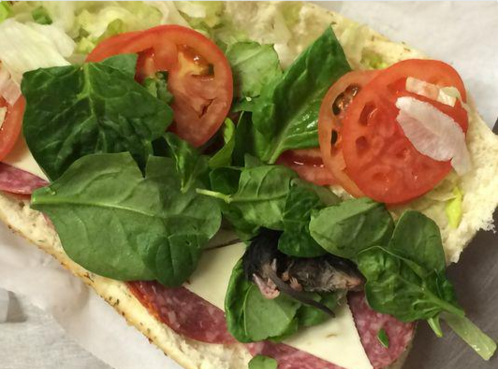 It’s unlikely Jay Armstead will be rushing back to Subway soon.

The Oregon man found a dead mouse amongst the spinach in his salami and cheese sub earlier this month.

For those who can stomach it, the little mousey can be seen below, hiding behind the greenery.

Customer with rodent in Subway sandwich: “It was unfortunate I was the lucky recipient.” http://t.co/TGfecJYt54 pic.twitter.com/bhXF7mRVti

The staff member at the store who made Mr Arnold’s Italian sub apparently scooped the last of the spinach out of the tub, after he requested some at the last minute, reported KGW.

The rodent was completely dead by the time Mr Arnold laid eyes on it, and quickly reported its unwanted presence to staff at the Lincoln, Oregon store.

Mr Arnold’s friend Matt Jones snapped the photo of the sickening sub, saying it was “The funniest thing I’ve ever seen, but also the most disgusting”, according to USA Today.

Subway issued a statement saying: “As soon as the customer alerted the owner about what happened, they were immediately given a full refund and an investigation was launched.

“To be cautious, all of the products in the sandwich unit were disposed of and a thorough cleaning took place, in which the Health Department gave the restaurant a clean bill of health.

“There were no other complaints made.”